While an army of consumers last month fumed over Reed Hastings' hasty (and now reversed) decision to split Netflix's DVD and streaming services, another group, numbering thousands around the country, marched down to their nearest Redbox kiosk and gave it a hug.

It was all part of a carefully-timed move by Redbox -- the Oakbrook Terrace, Illinois-based purveyor of movie and video-game rental machines -- to ramp up customer outreach in the face of its rival's recent blunder. And it's also a case study in what can happen when a market leader gets too cocky: the upstart competitor gets an opportunity to steal market share. 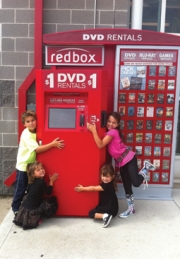 Consumers are expressing their love for Redbox.
Redbox, which turns 10 years old next year, has grown its fanbase with little fanfare. But now it's plotting its first national brand advertising campaign and has hired its first creative agency, San Francisco-based Camp & King, for the task.

The thrust of the messaging that will roll out over the next months is expected to revolve around the idea that Redbox is consistent, cheap and, most importantly, hassle-free. It also wants to demonstrate that it introduces products based on what customers want, and for that reason, customers love the brand.

In mid-September, as Netflix subscribers descended upon the brand's Facebook page to declare they were canceling their subscriptions, Redbox took to the social web too, launching a website called Redbox Share Your Love, where customers could submit a photo of themselves hugging a Redbox kiosk for the chance to win prizes. It also started the hashtag #iloveredboxbecause on Twitter.

For Redbox, the timing for a formal ad push couldn't be better. Besides the fact that one of its largest rivals is struggling with a humbling experience, America is increasingly renting at Redbox.

The company that got its start by testing out a few DVD-rental machines at Denver-area McDonald's experienced a huge growth spurt amid the recession as families were looking for cheap alternatives for entertainment. As of this summer, it estimated that it has 55 million rentals a month, amounting to about 40 rentals a second. It's growing increasingly convenient, too: 68% of the U.S. population now lives within a five-minute drive of a Redbox.

"They have a great story, and have grown like gangbusters pretty quietly," said Camp & King co-founder Roger Camp. "Two-thirds of the U.S. population will walk by a Redbox on any given day. The amount of exposure they have is pretty fantastic, so to activate those people is huge."

The chance to work on the assignment is huge, too: The agency, which just launched in February with minority backing from French holding company Havas, managed to hook up with Redbox without a review. Ms. Gibby and co-founder Jamie King worked together years ago at Leo Burnett. The shop's other clients include Old Navy and Capital One.

For a company that at the start of 2010 had just 30,000 Facebook fans, Redbox has seen a major spike in consumer advocates on social networks. Today, it has 3.65 million Facebook fans. Netflix? 1.9 million.