The sign in front of Barneys' holiday windows in Manhattan offers a warning: Windows could cause seizures. Beware. 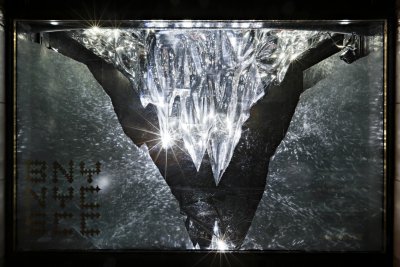 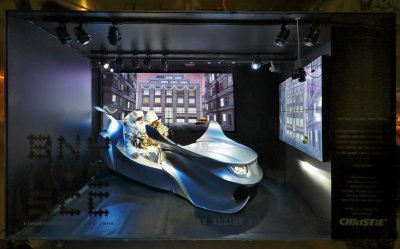 The black-and-white light show in Barneys' holiday windows, unveiled last week at its flagship store, is that startling. As retailers try to keep up with technology, some are chucking the Christmas Village this holiday season for 3D projection mapping, dramatic light shows and mobile-to-window technology. Barneys concentrated on mirrors and 3D projections, while Saks Fifth Avenue revived its light show and unveiled an interactive mobile window.

Barneys used projectors, microtiles and all-weather monitors from visual-tech company Christie in its Madison Ave. window designs. The windows are composed of blinding lights, gritty music and black-and-white graphics. Their themes, inspired by French artist Joanie Lemercier, include a 3D city sculpted by laser, icicles with projection mapping and mirrors, and a virtual sleigh ride.

On the third floor of Barneys is a pop-up shop that imitates New York's underground, industrial environment. It's dimly lit with black walls that project a film of New York's underground and skyscrapers on loop, while tables in the shop look like they were constructed from a chain fence and projectors on the ceiling swivel with spotlights. The shop and windows are a result of Barneys' collaboration with Shawn "Jay-Z" Carter, who created a line for the retailer that is sold in the pop-up shop. Barneys' efforts also supports Mr. Carter's charity, the Shawn Carter Foundation.

"This year, we really wanted to go for it because it's New York, and New York is tough. Jay-Z is tough," said Tommy Dobrzynski, VP-visuals at Barneys. "In the music you hear and the visuals you see, we wanted it to be a little blinding. At night, it really gets in your face, and we like that. Whenever we use the technology, we want to bring it back to the honesty of the material and using light as a medium."

For the fourth year, Saks asked Iris Worlwide to map the Saks holiday story onto the façade of the building with 3D projection mapping. Saks' holiday narrative follows a Yeti who moves to the U.S. from Russia and becomes a snowflake connoisseur who lives on the store's roof. With Iris' 3D video mapping, the light show plays every seven minutes and makes it appear as though the building moves, windows open and the Yeti waves. 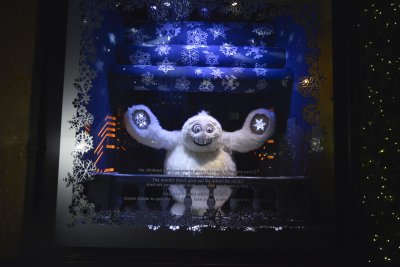 Saks' windows, meanwhile, are courtesy of the Science Project, which created an interactive activity that prompts passerby with a mobile invitation to pick a Yeti name, create a snowflake, and flick it from the device into the window itself, where it will materialize and fall to the ground.

"3D printing has been a big of late, so some of the figures in our window this year are actually 3D printed," said Harry Cunningham, senior VP-store planning and visual at Saks. "As technology advances and as things move forward, we're looking for opportunities to inject that into our process."

Even the more traditional Macy's is joining the tech arena. Its theme of "Dream… and Believe" follows a boy's dream through six windows as he enters a world where everything is made out of crystal and ice. An interactive screen with a hidden camera allows points of light to mimic the movements of passersby, according to the Wall Street Journal. LED lights beneath the icy sculptures give the illusion the water in the scene moves, while animated screens in the background flash words such as "believe" and "magic." And in the background, ornaments bob in and out of the scene, run by individual motors.