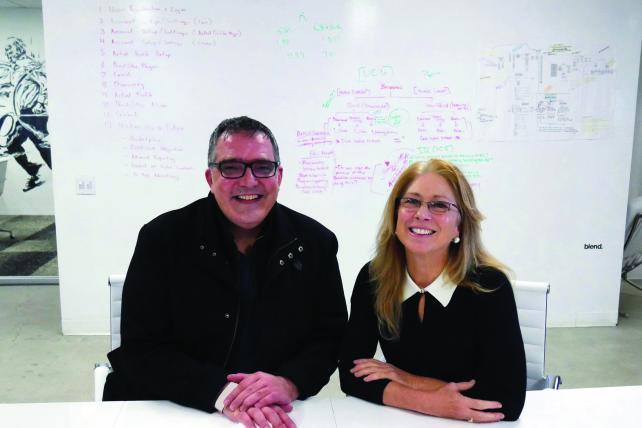 Darcie Lamond left an executive-level business and consulting position at a major financial services company to raise her family. A decade later, when she was ready to rejoin the workforce in 2014, she had trouble finding a job.

"It was tough, it was very tough to get people to look at you seriously because there was this sense of, 'Your skills are dated, you don't know how the world works anymore,' " she said. "That was frustrating."

Then she found Linda Wells, an executive recruiter with 11 years at Stanford University's Center for Entrepreneurial Studies, who was successfully reintegrating women into the workforce with "returnships" via her new company, Talent Reconnect. She introduced Ms. Lamond to Matt Bijarchi, who was trying to grow his Los Angeles-based ad agency, Blend, after founding the shop in 2013. Mr. Bijarchi brought Ms. Lamond on for a short-term returnship—and the rest is history. Within two years, she rose through the ranks at the 15-person agency to become partner last year.

The concept can represent a win-win: Women get more current experience in rejoining industry, and employers get experienced executives they couldn't otherwise afford.

In the ad world specifically, it's one possible solution to one of the industry's vexing problems—lack of diversity—as marketers and agencies grapple with how to make their workforces less homogeneous and more authentic representations of modern consumers.

Much of the demand can be attributed to marketers pressuring their agency partners for more equal representation between women, minorities and white men. Last year, for example, General Mills, Verizon and HP demanded that their agencies meet diversity requirements—or face loss of business. More brands are expected to follow their lead in the coming months.

New recruiting companies like Path Forward, a nonprofit founded a year ago that helps midcareer women find jobs across a variety of industries, are taking a page from similar staffing programs at banks such as Goldman Sachs, which began offering returnships in finance nearly a decade ago.

But advertising in particular has been a tough industry for women to crack.

"It's hard for women who have taken a few years off from marketing careers to get back in," said Tami Forman, founder and executive director of Path Forward, which employs four staffers and also provides transitional career support to women enlisting in a returnship program.

"Many ad agencies have great parity in their [employees'] first five years, where all account execs, juniors and creative folks are women," Ms. Forman said. "But then as you move up, you see that job becomes untenable for someone who is trying to raise a family—they drop out and can't get back in."

Some returnship hosts have initially been skeptical.

"It sounded too good to be true. We're always trained to think, if [workers] haven't been in the job market, that's not good, there's something wrong," said Mr. Bijarchi. "It's been the best decision I've made."

Clients have been requesting more feedback from women, he added, citing in particular emerging tech brands that are eager to know how older demographics interact with their products. Blend is now comprised of 11 men and four women.

"Marketers want to hear from non-technically phobic senior female executives about what they should be doing with their brands in 2017," said Mr. Bijarchi.

Of the 20 returnships Ms. Wells has placed with her company over the past three years, eight have been in marketing roles.

The bigger issue for women, Ms. Wells noted, is getting more flexibility from employers in the first place when they become parents, so that taking time off and then reentering the workforce is not necessary. But that would require a bigger cultural shift, one explicitly aimed at giving more women a chance to simultaneously advance in their careers and raise families.

Unless and until that happens, returnships also give agencies a chance to prove that they are serious about diversity by bringing in more senior-level talent.

HP, for one, wants to see women in manager positions at its agencies.

"Top brand CMOs are not idiots—you're not going to be able to snow these guys by bringing in a bunch of 24-year-olds," said Ms. Forman of Path Forward.

"They find they get people that have different perspectives, not just because they're women, but because they have taken time away and have more life experience," she said.