The risky business of fear 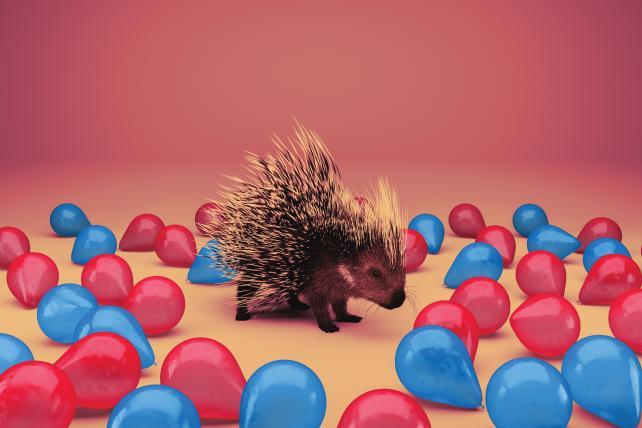 If you think of soaring political oratory as a particularly fine-tuned form of marketing, then you have to hand it to Franklin Delano Roosevelt for his famous "the only thing we have to fear is fear itself" line from his 1933 inaugural address. It feels reductive to call it a tagline or slogan, but that's what it was: an indelible, catchy phrase meant to sell weary Americans on the idea of overcoming their grave suspicions that things would never get better.

It's a brilliant line. It's also wrong.

OK, to be fair, in FDR's time, it (eventually) proved right: America did emerge from the Great Depression.

But in 2018, fear itself feels like an unquestionably legitimate and justifiable emotion. In fact, for millions of Americans, the lesson of the last couple of years is that our fears have been entirely inadequate. Every day, something happens on the national stage that's way worse—more maddening, more idiotic, more grotesque—than whatever, in our darkest imaginings, we feared might happen.

First, let's address the yellow-haired, orange-faced elephant in the room. Yes, I recognize that there are millions of Americans who totally relish President Trump's gleeful trashing of what we used to call "norms"—although even some die-hard Trump defenders have publicly cringed along the way. It's hard to even keep track of the systemic disruptions that seem to strike at the very heart of the American value system (e.g., coddling white supremacists after Charlottesville, deferring to Vladimir Putin in Helsinki, declaring that he "fell in love" with Kim Jong Un, reflexively defending the Saudis after the likely state-sponsored assassination of a journalist for The Washington Post). Not to mention all the tragicomically unpresidential optics (from just the past couple of weeks: palling around in the Oval Office with slavery-truther Kanye West and calling his porn-star accuser "Horseface" on Twitter).

Executive-branch follies aside, we're heading into the midterm elections with historically low regard for the legislative branch of our government (as of August, just 17 percent of Americans approve of the job Congress is doing, per Gallup). Respect for the judicial branch may never recover from the Brett Kavanaugh debacle (even a Fox News poll showed that a majority of Americans oppose having him on the Supreme Court in the wake of the confirmation circus). And as for the "enemy of the people," as President Trump calls the Fourth Estate, well, here's a headline from the Columbia Journalism Review last month, summing up a Knight Foundation-Gallup poll: "Most Americans say they have lost trust in the media." (Duh.)

All of this is leaving the body politic feeling unmoored and reeling. Add in a recurring backdrop of contemporary Americana such as mass shootings (met with "thoughts and prayers" and nothing else), epic natural disasters (met with inaction and climate-change denial), endless Alex Jones-esque hoax-humping and social media fakery (which Mark Zuckerberg et al. seem entirely powerless to stop) and the ceaseless subtext of the Mueller investigation.

And then throw in some hard realities about the economic recovery ("three-quarters of U.S. jobs created since the 2008-'09 financial crash pay less than a middle-class income," according to an Axios analysis of U.S. Labor Department data).

It's no wonder that fear and uncertainty prevail.

But back to marketing and taglines and slogans. Once upon a time—in 1933, for example—a credible politician could be relied upon to utter a poetic, reassuring line to soothe a fearful nation. But these days, we can't have nice things like that.

And so into the void, perversely enough, rush marketers. Circa 2018, brands have increasingly cast themselves as the voices of reason in a nation come undone.

McDonald's has been running TV commercials suggesting that at least we have a universal cultural reference point in the form of its restaurants. One shows Americans of every stripe putting hash browns under the top bun of their Egg McMuffins (gross, but whatever) before flashing the tagline: "We have more in common than we think." Another shows a white truck driver, a young African-American man and a couple of multiracial Little Leaguers all getting milkshakes to accompany their burgers and fries, followed by that same "more in common" tagline.

Allstate falls somewhere in the middle of the spectrum of brands trying to serve as national voices of reason. At the same time President Trump continues to cast doubt on climate change (telling Lesley Stahl on "60 Minutes," "You don't know whether or not that would have happened with or without man"), the insurance brand has been running commercials starring a grim Dennis Haysbert.

"A once-in-500-year storm should happen every 500 years, right? Fact is, there have been 26 in the last decade," he says, adding that "Allstate is adapting" by, for instance, using drones to survey storm-wracked areas. He ends with, "Now that you know the truth, are you in good hands?" Kinda risky talking about "facts" and "truth" in 2018, but at least Haysbert's script didn't explicitly include the words "global warming."

Levi's has arguably been pushing its luck with a multiculti get-out-the-vote ad that pointedly includes scenes of a (presumably) Muslim woman putting on a headscarf and niqab that covers much of her face, and then voting. The late Aretha Franklin's "Think" serves as the provocative soundtrack: "You better think (think), think of what you're trying to do to me..."

And then, of course, at the far end of the spectrum, Nike's Colin Kaepernick ad, in which the brand aligned itself with the former San Francisco 49er of anthem-kneeling-protest fame. The ad has been a contentious gift that has kept on giving—from scenes of anti-Kaepernick consumers torching their Nike gear on social media to, just last week, the interim CEO of USA Gymnastics, Mary Bono, resigning at the behest of star gymnasts who took issue with a tweet in which Bono showed herself inking over the Nike logo on her golf cleats (thus aligning herself with the anti-Kaepernicks).

Honestly, it's hard enough to just sell stuff—burgers or jeans or sneakers—without also having to make brutal calculations about public displays of conscience. As a marketer, do you risk going with a Nike/Kaepernick-type approach on whatever issue your management and/or consumers care most about? Or do you just stick your head in the sand?

To come full circle to FDR: In the 85 years since he first issued that "nothing to fear but fear itself" line, successive generations of politicians have quoted it so many times that it's taken on a mythical resonance—almost as if courage in the face of adversity is a foundational principle of American life.

You probably haven't heard the context surrounding the line since watching a grainy clip of it in a high school history class, so here it is:

"This great nation will endure as it has endured, will revive and will prosper. So, first of all, let me assert my firm belief that the only thing we have to fear is fear itself—nameless, unreasoning, unjustified terror, which paralyzes needed efforts to convert retreat into advance. In every dark hour of our national life, a leadership of frankness and vigor has met with that understanding and support of the people themselves, which is essential to victory. I am convinced that you will again give that support to leadership in these critical days."

OK, but whose leadership?

From a marketing perspective, the real issue may be that many brands have come to think of themselves as so integral, so central to their customers' lives that they simply can't turn a blind eye to the various sociopolitical currents sweeping our nation. And so they've been stepping up and assuming the mantle of moral leadership.

That, let's admit, is both an admirable and pathetic stance. Admirable because if CEOs and boards of directors really feel like they need to stand with those standing against, for instance, racial discrimination, more power to them. And pathetic because, in the grand scheme of things, we now seem to have collectively decided that profit-making enterprises (and their Cannes Lions-thirsty agencies) are better suited to display a moral compass than our supposed public servants. Somehow we're not supposed to regard this as crass or opportunistic.

But, well, as Childish Gambino puts it, this is America. The only thing we have to fear, really, is what we've let ourselves become.