Plus, Ford pushes the Mustang Mach-E with Idris Elba 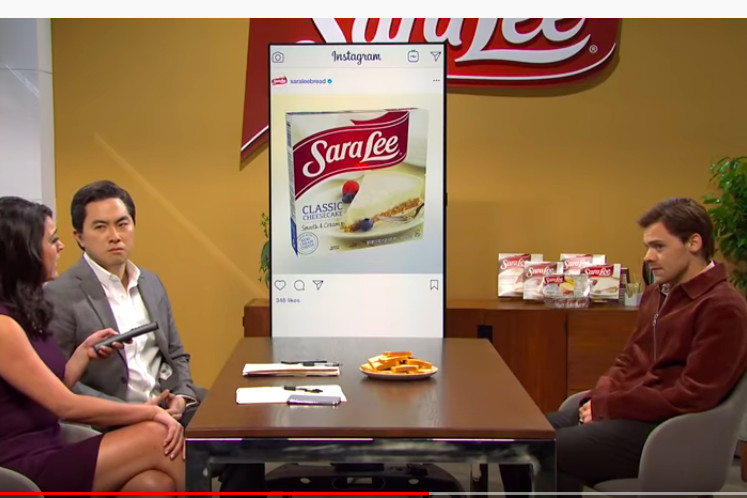 Sara Lee goes viral after SNL skit
Sara Lee has been going somewhat viral this weekend, for reasons that have nothing to do with the company’s own marketing. People have “flooded the Sara Lee account with saucy comments,” reports the New York Post  after a skit on "Saturday Night Live." In the segment, singer Harry Styles plays a Sara Lee employee who’s in charge of the brand's Instagram account but has mixed it up with his own personal account and posted some inappropriate comments. (For example: eggplant and water drop emojis on a photo by “some random guy with only 200 followers,” as well the caption “feeling really depressed after threesome” on a post about Sara Lee toast.)

After it aired, says the Post, the “hashtag #SaraLee trended on Twitter, as viewers reacted to the sketch in a number of ways, including sharing a sudden fondness for the company’s products.” Sara Lee owner Bimbo Bakeries USA told the Post: “We didn’t participate in creating the skit and its content doesn’t align with Sara Lee Bread’s brand. But, we all know SNL pushes the envelope for laughs and we are taking it in stride.”

Last week, Ad Age reported that paint brand Farrow & Ball actually responded with its own tactical ad in the New York Times after SNL made fun of its high prices and flowery descriptions. While we can’t see Sara Lee creating an ad referring to threesomes any time soon, for both brands, it’s resulted in some pretty great free PR.

Sorrell denies slap in the face
Martin Sorrell's bitter relationship with his former company WPP was back in the news again this weekend, with a revelation in the Financial Times about an “explosive confrontation last week” at a conference in Lisbon at which he’s alleged to have slapped the face of a former WPP colleague.

The FT reports that “two witnesses have spoken of a heated incident last Thursday morning in the speakers’ room of the Web Summit in Lisbon, which involved Sir Martin and Jim Prior, the head of WPP’s Superunion brand agency network.”

According to the story, WPP’s lawyers sent Sorrell a written complaint, but Sorrell has denied the slap, which is alleged to have come after a row about comments Prior made to press about him last year. He admitted to taking Prior to task about comments that "S4 Capital was a speck in the rear-view mirror" but said it was “a very brief exchange, with no injuries or complaints on either side”.

Ford pushes the Mustang Mach-E with Idris Elba
Ford has started promoting its Mustang Mach-E electric crossover, and as Ad Age’s E.J. Schultz reports, it’s putting some “major marketing” behind the model as it aims to compete with Tesla. Matt VanDyke, Ford’s director of U.S. marketing, said in a Friday interview that it aims "to have about a billion impressions starting Sunday and going into next week.”

Actor Idris Elba is starring in TV ads by BBDO to promote the model, which goes on sale next spring. Teasers started running on Saturday and Sunday during college and pro football broadcasts, and longer ads will begin running this week, including during live sports.

“Just when you think you know where they are going, they do something unexpected,” Elba says in one of the ads, articulating Ford’s strategy of pushing the vehicle as a “new breed of Mustang.”

Just briefly:
Mendelsohn's charity: Facebook’s VP of Europe, the Middle East and Africa Nicola Mendelsohn will today unveil a new cancer charity, the Follicular Lymphoma Foundation, after being diagnosed with the disease three years ago. She aims to raise $20 million over three years and will be the face of an ad campaign shot by Rankin, which includes billboards in Times Square. Read more here.

Campbell's Walmart coup: "Campbell’s has managed to get its cans of soup in the front of 1,400 Walmart stores through a sponsorship with Hallmark Channel parent Crown Media around the 10th anniversary of its 'Countdown to Christmas' programming," writes Ad Age's Jeannine Poggi.

4A’s exit plans: Advertising agencies are beginning to rethink their membership in the 4A’s, reports Ad Age’s Lindsay Rittenhouse. McCann Worldgroup is one such network weighing its investment in the trade group, writes Rittenhouse, although it hasn’t confirmed that publicly.

TikTok in streaming talks: TikTok owner ByteDance is in talks to launch a music streaming service to compete with Spotify and Apple, reports the Financial Times. It’s said to be in talks with Universal Music, Sony Music and Warner Music over licensing deals.

Parody of the Day: The inevitable parodies of the John Lewis holiday ad "Excitable Edgar" are here, and the best so far comes  from PoliticsJoe, the political channel of a U.K. comedy website. Its new send-up has "Dangerous Donald" Trump as the spot's fire-breathing dragon, with a censorious Greta Thunberg as the little girl trying to keep him in check. You can watch it over at Creativity Online, and in the meantime don’t forget to check out Creativity’s Top 5 campaigns from last week, including Renault’s same-sex love story celebrating 30 years of the Clio.