Crisis of Confidence as Consumers (and Marketers) Brace for Downturn

CPGs, Fast-Feeders in Good Shape; Media in for Bumpy Ride
READ THIS NEXT
Sephora plans dozens of new U.S. stores in bet on physical retail resurgence

Vote of no confidence

The Index of Consumer Sentiment, measuring consumer confidence about current and longer term prospects, in August crashed to a preliminary reading of 54.9, the third-worst score since the index began in 1952. The only lower scores came in May 1980 (51.7) and April 1980 (52.7) during a recession. Low point in 2008 was 55.3.

Amid double-dip hysteria, stock-market tumult and plunging consumer confidence, economists still put comparatively low odds on the nation entering an official recession. But that debate may be academic. This recovery is flatlining, and prospects are dim regardless of whether the economy sees miniscule growth or actually contracts.

Consumers could hardly be more pessimistic. Thomson Reuters/University of Michigan's Index of Consumer Sentiment crashed to 54.9 in August, according to the preliminary reading released Aug. 12, the lowest point since the 1980 recession.

"The current financial and political climate in this country, and in the world, seems to have resulted in a perfect storm for the economy," said Buz Sawyer, president-CEO of Cheil North American Holdings, part of South Korea agency group Cheil Worldwide. "I've spoken with many former and current colleagues and clients about the potential impact on the industry, and it's not a pretty picture."

"As is true in life, the markets and the marketing industry, perception typically trumps reality," Mr. Sawyer said. "There will most likely be more belt tightening by both consumers and businesses, which will of course adversely impact our industry."

All media are likely to feel the pain of a weaker economy. "If the advertising market goes down, Google's going to feel it, too," said Edward Atorino, media industry analyst at Benchmark Co.

A slowing economy will most hurt media sectors that already face long-term challenges.

"There is most likely going to be some weakness going into the back half of the year," said Leo Kulp, an advertising and publishing analyst at Citi Investment Research. That will especially afflict sectors already struggling with secular changes (such as newspapers and magazines). Strong, growing media players (such as Google and cable programmers) and agency holding companies should do better."

"Companies need to continue to invest in advertising and marketing," Mr. Kulp said. "That's going to benefit the ad agencies [and agency holding companies]. But I think you're going to see continued share coming away from the challenged media. You'll see the P&Gs of the world taking money away from newspapers and using that for digital and cable networks and other media forms."

Procter & Gamble Co., the nation's and world's largest advertiser, on Aug. 5 said it expected worldwide sales this fiscal year to increase 5% to 9% and vowed to boost ad spending in line with sales growth -- a bullish sign for media overall considering that P&G is the top U.S. spender on cable TV and in magazines and the No. 2 advertiser on network TV.

How slowing GDP will translate to media and entertainment is still playing out. Walt Disney Co. President-CEO Bob Iger, speaking to analysts Aug. 9, said: "During the past few days, we haven't seen any changes in our parks and resorts, advertising or consumer-products businesses." But stock in Disney -- parent of ABC and ESPN -- fell sharply last week amid concerns that businesses such as theme parks could be hurt going forward.

Marketers are showing caution in developing marketing plans for the fall and beyond. Some are reconsidering plans that don't have immediate impact to the bottom line. "There has been a dramatic shift from 'nice to have' to 'need to have,'" said Wes Nichols, CEO of MarketShare, whose technology helps Fortune 500 companies allocate media spending. "Extraneous, experimental or soft solutions are being tossed in favor of doing more with less."

Experts in marketing analytics stand to benefit. Lisa Donohue, CEO of Publicis Groupe 's Starcom USA, said challenges being faced by clients "support the need for robust analytics practices that can give us more real data regarding what is driving business vs. what is not."

A slowing economy could speed up the reordering of media. "The volatile stock market and current economic challenges are taking place coincidently with a long-term fundamental change in the media business where the way people find, consume, contribute and share information continues to evolve," said Matthew Harrington, U.S. CEO of public-relations powerhouse Edelman.

"We are guiding clients about new ways to engage and involve their customers, and all stakeholders, more directly in their brands," Mr. Harrington said. "So we're not radically changing marketing plans because of 1% GNP growth, but rather because of people's higher expectation of having a relationship with brands, and how they can increasingly engage companies through social media."

A weakening economy will affect marketers to varying degrees. Sellers of big-ticket goods such as cars will face challenges. Marketers of consumer staples and low-price goods should be less affected.

McDonald's Corp., for example, is in a position to weather the storm. The fast feeder last week reported a 4.4% jump in U.S. same-store sales for July, following strong second-quarter earnings growth that the company partly attributed to advertising on flagship products such as Big Mac and Chicken McNuggets.

Consumer-packaged-good companies continue to rely on revenue growth from developing countries. In the second quarter, the "overall theme was pressures on the cost side with higher commodity costs, weaker sales in the U.S. and Europe and better sales growth in emerging markets," said Jack Russo, a senior consumer analyst for Edward Jones who covers Campbell Soup Co., General Mills, PepsiCo, Walgreen Co. and others.

Still, Mr. Russo does not expect package-goods sellers to cut back on domestic marketing spending or shift more ad dollars to developing markets. That's because in emerging markets, the "pie is growing," he said, "and so the guys that are duking it out don't have to compete as much on price or advertising."

An economy in the drink is bad news for the alcohol industry, especially beer, which is seeking to emerge from a lengthy slump driven by high unemployment among blue-collar consumers. "We've been in a tough patch for quite some time . . . and this certainly is not going to help matters," said David Henkes, who follows booze trends at bars and restaurants for Technomic, a food-industry research and consulting group.

So are we headed into an actual double dip, following the 2007-2009 recession? For consumers and marketers, it may not really matter.

In a Wall Street Journal survey last week, economists said the odds are just 13% that the nation is in a recession now, with a 29% chance that we'll enter recession in the next year.

Nice odds -- except we may lose regardless. The economy is so fragile now, and consumers so on edge, that it may not matter much if (down the road) arbiters rule that the nation had entered a double-dip recession in 2011 or if the slow-mo recovery continues.

IHS Global Insight, a prominent forecaster, on Aug. 12 lowered its economic projections. "We no longer expect a bounce in GDP growth during the second half of the year, and now expect just 1.2% growth in the third quarter and 1.5% in the fourth," wrote Chief U.S. Economist Nigel Gault. "Combining that with the revisions to the first half of the year puts calendar-year growth at 1.6%, not 2.5%. We have also scaled back growth expectations for 2012 (to 1.9%, from 2.6%) and 2013 (to 2.2%, from 2.8%), because we have factored in a more drawn-out, laborious recovery. This is a weak growth outlook, not a recession, although we have placed recession odds at 40% since weak momentum leaves the economy vulnerable to shocks."

It's hard to grow when the four components of GDP are all under pressure: consumer spending (71% of GDP last quarter); private investment (12.7%), depressed by companies' reluctance to invest in equipment and facilities and by weak home sales; government (20.2%), which is slashing spending at the federal, state and local level; and net exports (-3.9%), where weakness in economies abroad is hurting U.S. exports. 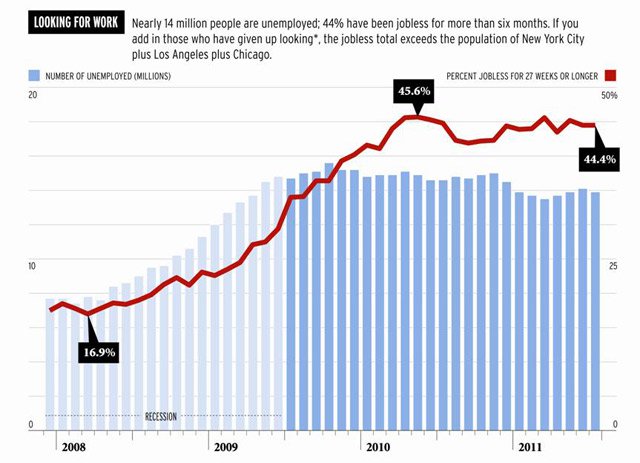 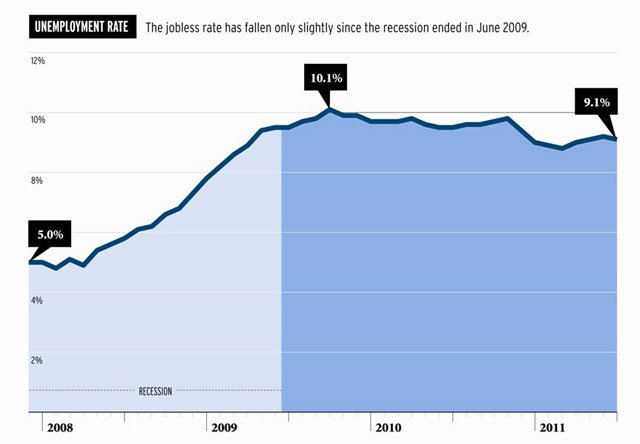 Seasonally adjusted. *As of July 2011, there were 1.1 million "discouraged" jobless who have given up trying to find work because they believe no job is available. Source: Bureau of Labor Statistics.

Nearly 14 million people are unemployed; 44% have been jobless for more than six months. Add in those who have given up looking for work, and the jobless total exceeds the population of New York City plus Los Angeles plus Chicago.

Corporate America approaches the gathering storm in a comparatively strong position, flush with cash and with solid earnings so far this year. Non-financial firms in the Standard & Poor's 500 are sitting on $1.12 trillion in cash and short-term investments, up from $703 billion amid the global financial crisis in third-quarter 2008, according to data from S&P's IQ Capital cited by The Wall Street Journal.

The cache of cash is good and bad: It will help companies manage through uncertain times, but the cash also is indicative that companies are reluctant to invest -- new operations, factories, marketing -- when it's not clear consumers are willing or able to spend.

The Federal Reserve's statement last week put things starkly: "Indicators suggest a deterioration in overall labor market conditions in recent months, and the unemployment rate has moved up. Household spending has flattened out, investment in nonresidential structures is still weak, and the housing sector remains depressed." The Fed intends to keep short-term interest rates near zero "at least through mid-2013." It's going to be a long, bumpy road to recovery.

Index of Consumer Sentiment. Base: 1966 = 100. Source: Thomson Reuters/University of Michigan Surveys of Consumers.