Why Selling 3-D Cameras Won't Be a Snap

Fujifilm, Sony, Olympus All Have New Technology in the Works, but Marketing Challenges Abound
READ THIS NEXT
GroupM pledges investment in Black-owned and diverse media, plus Chipotle hikes wages: Tuesday Wake-Up Call

NEW YORK (AdAge.com) -- Get ready for some competition, James Cameron. 3-D cameras and camcorders are coming to the masses.

Despite multiple issues, analysts say 3-D cameras will eventually take off.
Except that it might take almost as long for consumers to catch on to the concept as it did to make "Avatar."

Fujifilm is on its second generation of a 3-D still and video camera; Sony just announced its 3-D camera and camcorder lineup; Olympus is adding 3-D via software to some cameras; and Panasonic has come up with an add-on 3-D lens. However, while manufacturers have clearly figured out how to bring 3-D down to the consumer level through 3-D technology, the much bigger challenge is a marketing one.

For instance, how do you convince consumers they need a 3-D camera when they most likely don't own a 3-D screen? Only 1.1 million 3-D TVs were sold in 2010, and 1.9 million more are estimated to sell this year, according to the Consumer Electronics Association. How do you convince them to spend not only several hundred on the 3-D camera, but also several thousand more on the 3-D TV or 3-D computer display? And that's only the beginning.

Taking a 3-D picture requires some specific knowledge, such as knowing that the 3-D "sweet spot" is standing four to five feet from the subject and that it's best to have at least two points of interest at different depths, according to the 10 tips Fujifilm packages with its 3-D camera. Printing a 3-D photo can be another hurdle. There are some processors, but they tend to be expensive, especially compared to normal digital prints. 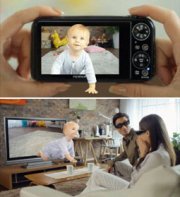 It's not only the 3-D camera market that has equipment and education hurdles, but the entire 3-D industry.

For Sony and Olympus cameras, which add 3-D perspective via software, the user actually has to take two pictures. After the first shot the user is directed to move the camera in the direction of the arrow and take another shot, which also requires keeping a very steady hand.

It's not only the 3-D camera market that has equipment and education hurdles, but the entire 3-D industry. Last year, Best Buy CEO Brian Dunn blamed poor 3-D sales not on the technology, but on the failure of the marketing. He commented in a fall holiday preview with reporters that consumers didn't even seem to realize that 3-D TVs could show 2-D content as well.

And 3-D camera makers have figured out some issues better than 3-D TV makers, having learned the lesson that education, simplicity and gradual introductions are priorities. There is a standard file format for 3-D photos, and the current crop of cameras connect via HDMI cable to most 3-D TV and 3-D computer brands. If 3-D cameras succeed, it could prove a boon to declining digital still camera units and overall sales. NPD Group analyst Steve Baker said that category has been declining in units sold by single-digit percentages for the past few years. The first 3-D camera maker, Fujifilm, has also been first with a widespread ad campaign, buying up 3-D movie screens this past holiday season with cinema ads for its second generation FinePix Real 3-D W3 camera, running along with a print and social-media campaign targeting enthusiasts and early adopters.

"The cinema ads gave us an opportunity to show the camera in action ... and put us in front of a lot of families, a secondary audience, but important because those are the people who will eventually plunk down the money for 3-D TVs," said Joan Rutherford, VP-corporate communications, Fujifilm Holdings America.

Steve Sommers, Sony VP-marketing for its home and digital imaging divisions, said in 2011 the company will focus on education, with retail in-store displays and promotions, online marketing, and assisted selling reps working for Sony at retail to promote its 3-D cameras and camcorders.

Olympus' first 3-D camera, out in the next month, marks a gradual start in 3-D for the camera brand. "Right now, it's a feature for early adopters for us. It's to recognize that a substantial percentage of our customers are early adopters who maybe have made a 3-D display investment," said Sally Smith Clemens, product manager, Olympus Imaging America.

Neither Sony nor Olympus has any campaigns for their 3-D cameras at this point, but Sony Electronics' agency of record is 180, Los Angeles; and Olympus' is Mullen, Boston.

They also sell at a premium to regular digital cameras. The Fujifilm 3-D W3 retails for $499.95 and Sony's range of CyberShot cameras with 3-D still imaging capabilities will go $220 to $280, depending on the model.

Some analysts do think that 3-D cameras and imaging will eventually succeed and take hold with consumers. "3-D is inevitable because the whole history of imaging is essentially the history of technology progressing to the goal of capturing, replicating, and sharing our experience of vision," said Alexis Gerard, founder of the 6Sight Future of Imaging conference.

However, even with early adopters, 3-D camera marketing must still work to diminish the risk of confusing or alienating potential customers.