Soap Cleans Up By Raising the Bar

Liquid Is Getting Left Behind As Consumers Seek High-end, Crafted Solids
READ THIS NEXT
Dodge pays homage to history with EV logo
Credit: Illustration by Athletics

When it comes to soap, the bar is back.

Thanks to a lot of mass marketing, liquid soap has become the suds of choice over the past 10 years. But market data suggest that more Americans are raising the bar, or at least incorporating it into their daily routine. Mass-retail sales of bar soap increased 4.7%, to $1.2 billion in 2011, from $1.1 billion in 2010, according to Chicago-based market-research firm Mintel. That's more than double the growth of body-wash sales, which were up 2% year over year to $1.9 billion.

The rise in bar soap now playing out in the luxury and specialty space indicates that the shift isn't being driven by recession-induced penny-pinchers. And it's not a shift driven by marketing, but almost anti-marketing: With the rise of overly fragrant body washes such as Axe, bar soap seems to represent something, well, pure.

"People try handmade bar soap for different reasons -- [for] some, it has to do with allergies, sensitivities to [mass-produced] fragrances," said Cathleen Timberlake, president of the Saratoga Springs, N.Y.-based Handcrafted Soapmakers Guild. "But I also think there's just a big interest in products that are homemade." The trade group has seen its membership increase to 1,700 soapmakers from 1,242 in 2010.

Boutique apothecary chain Space NK -- almost a Sephora for niche brands, with stores across the U.S. and in Europe -- added multiple soap SKUs over the past year. "Bar soap evokes a sense of tradition and craftsmanship that you simply do not get with a hand-sanitizing utilitarian liquid soap in a pump container," said Space NK founder Nicky Kinnaird. It also helps that the formulas are better than before. "They've improved beyond measure," said Ms. Kinnaird. "Antioxidants and skin hydrators are being added to triple-milled vegetable bases." 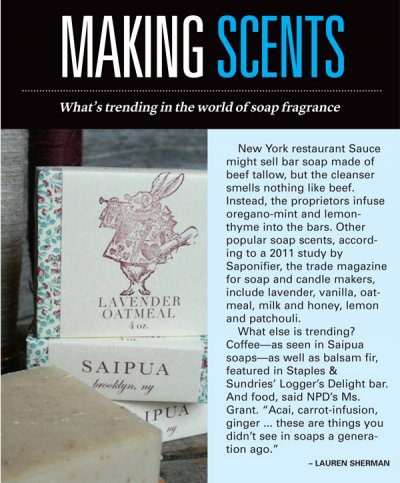 The retailer also introduced soaps through two of its private brands, Beautannia and Sai-Sei, a Japanese-inspired skin-care line. Since Sai-Sei's September 2011 launch, the collection's two soaps have represented at least 16% of unit sales, though more recently, the percentage jumped to 21%. Meanwhile, Beautannia's four soaps consistently represent about 25% of the brand's unit sales, but have increased to 44% during the holidays.

With scents such as "saltwater" and "coffee mint," Red Hook, Brooklyn, flower shop Saipua's line of olive oil-based soaps is sold at stores big and small across the country, including Urban Outfitters-owned Anthropologie and a small Brooklyn chain of women's boutiques, Bird.

One mass retailer, Macy's , seems to have caught on. In 2007, it launched several shops in a shop with U.K. beauty chain Lush, best known for its handmade bar-soap by the pound and fizzy bath bombs. Today, about 20 Lush at Macy's locations remain, with Lush closing quite a few to instead open more standalone stores. (That, however, is probably more indicative of the modern consumer's move away from malls to open-air shopping centers and boutique-lined streets.)

At Vancouver, B.C., general store Old Faithful Shop, which sells everything from Camano coffee mills to Faribault Woolen Mills military blankets, production of its own soap collection has helped the retailer expand into consumer products. The line, called Staples & Sundries, is made by the Port Townsend, Wash.-based Townsend Bay Soap Co.

"Soap is a nice way for us to begin building our brand," said Walter Manning, co-owner of Old Faithful. "We have lots of customers returning" for bars.