Thanks to Social Media, Direct Marketing Is Going Do-It-Yourself

How More and More People Are Bypassing Agencies and Taking Matters Into Their Own Hands
READ THIS NEXT
Quibi calls it quits, and a final presidential debate looms: Thursday Wake-Up Call

NEW YORK (AdAge.com) -- Musician Phil Marshall has performed for stadiums of 24,000. Now he's setting out on a tour where he'll play for audiences conceivably as small as one. 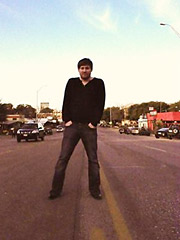 Phil Marshall wants to play your town.
Mr. Marshall's "Living Room Concert Series," in which he'll bring his act to backyards, lunchrooms, birthday parties -- you name it -- for a nominal fee is just one in a series of creative do-it-yourself marketing initiatives among entrepreneurs from book authors to murder-mystery theater companies to bring their brands directly into the homes of consumers.

"People have an innate desire to connect, and while that can mean social media, it also means in person," said Leslie Poston, founder of the Uptown Uncorked consultancy, which counts independent filmmakers, wine makers and restaurants among its client base. "The interesting thing about a great social-media campaign is it has to have an offline component. The whole point is to get people together."

It's often born of necessity. Author and internet strategist Aliza Sherman began a self-directed book tour in 2001 after her publisher told her the marketing money on the two titles published thus far had been spent on her advance. So she spent a year driving an RV around the country while an out-of-work friend called Barnes & Noble, Borders or the local bookstores offering book signings. With marketing budgets tight at publishing companies, many authors are doing similar kinds of promotional events and visiting book clubs held at people's homes to do author chats and signings, sometimes traveling cross country and sleeping on friends' couches.

Building buzz without spending cash
Similarly, the "Living Room Concert Series" was a way for independent artist Mr. Marshall to get his brand buzz without the deep pockets of a major music company. "When you are an independent musician there are a number of considerations when it comes to funding that always pop up," he said. "How do you connect without national distribution?"

After studying some of the marketing techniques by artists such as Nine Inch Nails' Trent Reznor, he and his agent concocted a two-tiered concept: a "Gold Package" for a maximum of 30 people for $250 that includes a private solo acoustic performance for 45 minutes; a meet-and-greet and merchandise singing; and a $500 "Platinum Package" that provides two 45-minute sets for up to 50 people, a meet and greet, digital back-catalog, signed CD and photograph and initialed guitar-pick. There are also add-ons such as an autographed set list for $30, or requests, at $10. "The audience is a stakeholder in the show," he said. "There are no barriers."

The aim of the singer-songwriter is to promote his fourth album, "Magnolia," with PR pickup from local radio stations and publications stoked by earned media from Twitter, Facebook and social-media sites. "If I fancy a Starbucks, I'll go inside and ask if I can play and Twitter it," said the Yorkshire, England, native who now lives in Houston. "Maybe they'll sell a few grande lattes."

He said most of the initial 20 dates in areas such as New York, Chicago and Washington filled so fast that that he is adding California to the tour.

From murder to chocolate
David Goldstein, founder of Mystery Caf?, a mystery dinner-theater restaurant, has franchised the concept to more than 20 cities around the country but is extending the idea with "Invitation to Murder," a custom murder mystery performance in people's homes in cities including Boston, Chicago, New York and Philadelphia. "If people can't come to us, we'll go to them," Mr. Goldstein said. The private parties act as marketing tool for the scheduled shows and special events such as Murder Mystery weekends, and vice versa.

He has also recently begun a chocolate tour and workshop business, Taste of Chocolate, and plans to extend his business plan to do in-home chocolate workshops with partners around the county. With his own hard work and connections, he figures there's no point in hiring an ad agency.

"The agencies outsource so many things -- SEO, design, websites. No one today is saying 'I can't do what they're doing now,'" Mr. Goldstein said.

"DIY marketing has been a huge trend lately, and I think it's because of technology," said Ivana Taylor, president and CMO of small-business marketing consultancy Third Force. "There are things available now that allow people to do so much marketing themselves ... It's almost like you have to wonder, why would you hire an ad agency?"

But in the case of author Ms. Sherman, it also spawned an agency, as the do-it-yourselfer teaches others how to do it themselves. She co-owns a social-media marketing company called Conversify that helps clients use social-media tactics and tools. Styletrek.com is one such client looking to go directly to consumers with emerging fashions. The company is soliciting emerging designers -- and the "styletrekkers" who discover them -- for its fashion website opening in August. They plan to eventually hold in-home fashion parties, thrown by styletrekkers for their fashionista friends.

"People want customization and personalization and one-to-one experiences," Ms. Sherman said. "It's direct-to-consumer [marketing] and with their input."