Coffee giant Starbucks is about to launch one of its biggest marketing blitzes ever to push Verismo, a triple-threat new coffee machine that could change the single-serve market.

The TV, print, social and digital push supports the launch of what Terry Davenport, senior VP-marketing at Starbucks, said is the only single-serve machine available at retail that 's capable of producing brewed coffee, espresso and espresso-based drinks such as lattes (Starbucks sells milk pods for lattes). The product will be sold not just in Starbucks stores, but also at Williams-Sonoma, Sur La Table, Bed Bath & Beyond and Macy's , as well as speciality retailers abroad. 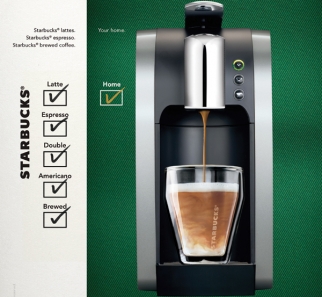 Verismo "allows us to come at marketplace with the positioning of having all your favorite Starbucks beverages, no matter what they are, available on one machine," said Mr. Davenport.

How big a product proposition is that ? So big that the competition will be caught unaware, predicted Morningstar analyst R.J. Hottovy. "We remain confident that Verismo will be a disruptive force in the rapidly growing at-home premium single-serve coffee category," said the analyst in a recent note. "Our conversations with retailers who will carry the product suggest a tremendous amount of demand, and we believe the market may be underestimating the long-run impact of the Verismo."

Even so, Starbucks is taking no chances. It's pulling out all the stops in positioning Verismo as the ideal gift for the holidays. Mr. Davenport said the campaign for the coffeemaker, breaking Oct. 15, is as large in terms of size and priority as the 2009 launch of Via, Starbucks' single-serve instant coffee. Starbucks in 2010 spent more than $25 million on U.S. measured media for Via, out of a total budget of roughly $93 million, according to Kantar Media.

The campaign will include TV spots, print ads, social media and digital marketing. TV ads will appear during prime time on network and cable channels, and the company will also have a presence on Univision and Telemundo. The print campaign will focus on higher-end fashion, design and lifestyle titles, such as Bon Appetit and Architectural Digest. Lead agency BBDO worked on the campaign, as did the chain's digital agency, Blast Radius, along with Starbucks in-house creative.

Starbucks will complement the marketing with a significant demonstration and sampling effort in more than 65% of its U.S. stores leading up to Christmas, along with more than 10,000 events at specialty retail stores carrying the machine.

The single-serve market is the fastest growing in the coffee category, and Starbucks has multiple entries. Aside from Via, it has a multiyear contract with Green Mountain Coffee Roasters, parent company of the Keurig single-serve coffee machines. Other competitors also have single-serve machines, such as Kraft Foods' Tassimo and Nestle's Nespresso.

As of August, the category has grown to more than $8 billion globally, more than double the growth in the U.S. in the past year alone, according to StudyLogic.

Sensing increased competition from Verismo, Keurig recently reduced the price of Vue, its new premium K-Cup machine launched earlier this year. Vue originally retailed for $249.99, was then reduced to $229.99 and last month was lowered to $209.99. The Verismo retails for $199 and $399.