How Via Steamed Up the Instant-Coffee Category

Starbucks' Premium Blend May Have Swayed Skeptics but It's Yet to Realize Goal of 'Additional Usage Occasions'
READ THIS NEXT
More Super Bowl advertisers line up as Bucs set to face Chiefs, and RIP Larry King: Monday Wake-Up Call

CHICAGO (AdAge.com) -- When Starbucks entered the instant-coffee market two years ago this February, the company was not bashful, heralding the Via launch as a "transformational" moment that would "reinvent" the much-maligned instant category. And when the brand went national that September, President-CEO Howard Schultz flatly said it "will change the way people drink coffee." 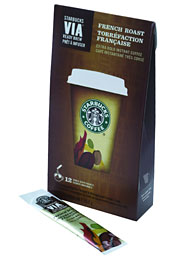 REMOVING THE SHAME FROM INSTANT COFFEE: U.S. consumers have avoided ready-made brews, associating them with lower quality, but in Europe, they're the norm.
Was he right?

It's hard to argue with Via's sales results -- topping $180 million globally as of December, according to the company -- which have proven some skeptics wrong.

"I was very dubious as to its chances of successes. We just didn't see that an instant-coffee product would do well in the U.S.," said Bill Patterson, an analyst with market researcher Mintel. But "we are being proven wrong on that," he added. "They should be pretty pleased with what they've achieved."

But if the coffee giant was aiming for a radical makeover in how consumers enjoy coffee, it has missed the mark -- at least so far, said another expert.

"The whole idea that people are going to put this in their purse or briefcase and walk around with it and make their own Starbucks in a flash, I think is unrealistic," said food industry analyst Phil Lempert. Mr. Lempert, who runs supermarketguru.com, even put Via's recent flavored-coffee line extensions on his list of the worst products of 2010, offering this review: "This is one of those products where the added convenience just does not make up for the taste. Inside one of these little packets is a secret recipe of instant and 'micro ground' coffee. But the first ingredient is not coffee -- it is actually sugar. No aroma, no real coffee flavor, and for about a buck each -- no sale!"

Back in 2009, Mr. Schultz predicted that coffee lovers would incorporate Via "into their daily routine so they will never be without great coffee." In other words, Starbucks sought to increase the number of times per day people drink coffee -- or as Mr. Schultz said, create "additional usage occasions." As a result the coffee giant would not only take market share from other instant- coffee brands, but grow the entire category.

By that score there is evidence of success. Via hit grocery and drug stores in May of last year and for 2010 was already the fifth-best-selling instant coffee brand by volume in the U.S. with 10.4% market share, according to Euromonitor International. While other brands lost dollar and volume share -- including a four-point loss by market leader Folgers instant, which has 22.9% volume share -- dollar sales in the entire category grew by 15% to $704.9 million. That's a big jump for a category which shrunk three of the previous four years, with the only increase coming in 2008 at a modest 1.8% gain.

"I think Via contributed a lot of incremental volume to instant coffee," said Richard Haffner, head of global beverage research at Euromonitor International.

For Starbucks, opportunity lies in persuading skeptical Americans to try instant for the first time by enticing them with a more premium version, which, by the way, is also more expensive. Historically, U.S. consumers have mostly avoided ready-made brews, associating them with lower quality. In 2010, instant retail coffee sales in the U.S. accounted for just 8% of the overall coffee market compared with 77% in the U.K., for instance, according to Euromonitor International.

In the U.S., Starbucks is seeking to change the coffee culture by leveraging what no other competitor has -- a network of 3,000 licensed stores that sits inside grocery stores where the company, though sampling, can increase Via awareness. "The grocery channel, the trade, would probably have no interest in a traditional new instant coffee priced at 6 times [higher than] traditional instant coffee unless it had the brand name of Starbucks and was validated in our stores," Mr. Schultz said at a recent investor conference. "And that's exactly what's happened."

But Mr. Haffner isn't ready to call it a victory just yet: "I think what will tell the tale will be [this] year and how much of the volume they generated [last] year they hang on to."