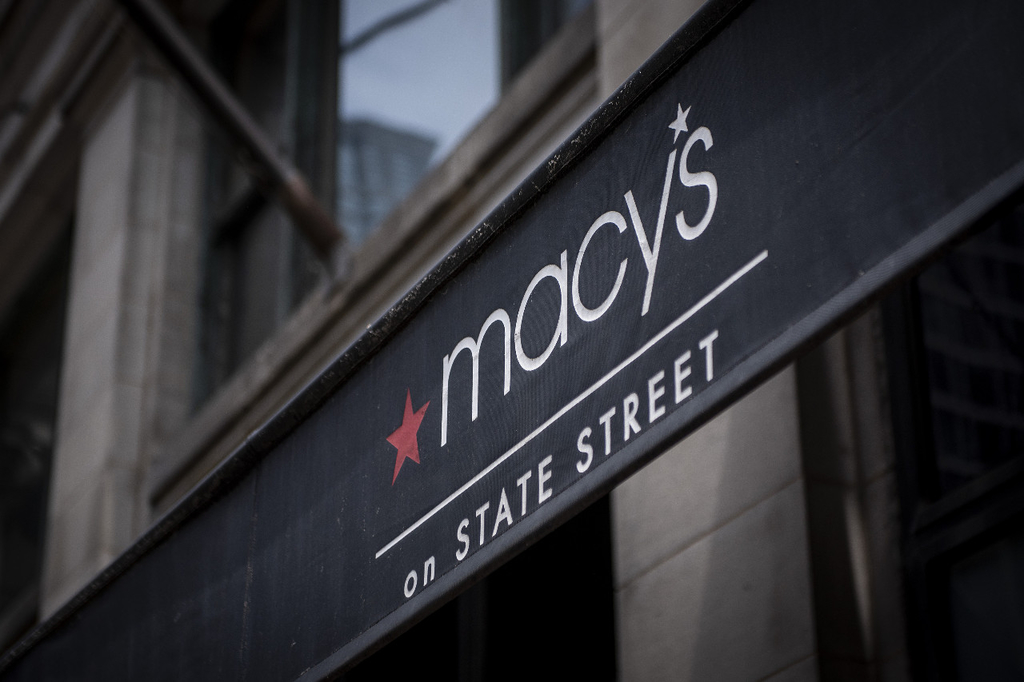 Stock markets fall sharply with retail in trouble
Stock markets in the U.S. and Europe fell sharply yesterday on fears of a trade war with China and news that the German economy is shrinking, and the losses continued in Asia overnight, fueling growing fears about a possible recession.

The New York Times reports that the S&P 500 fell 2.93 percent on Wall Street. While the losses were led by a steep drop in the energy sector, the retail sector also suffered after Macy’s reported lower quarterly results earlier in the day. The department store’s shares were down by 13 per cent after the announcement with a knock-on effect on the likes of Nordstrom, JCPenney and Kohl’s. (Elsewhere, there was more bad news for American retail: as Bloomberg reports, plus-size women’s retailer Avenue announced it would shutter all 222 of its stores.)

Also down were shares of big tech companies, with Apple and Microsoft down more than 2.5 and Amazon down by over 3 percent. Overnight, reports The Guardian, stocks were down sharply in Asia, although the fall was not as bad as on Wall Street. The biggest falls were in Australia.

WeWork ramps up marketing spend ahead of float
WeWork, the office co-working space brand, filed paperwork for its IPO yesterday (interesting timing, guys) and as Ad Age’s Adrianne Pasquarelli reports, it’s preparing to spend a lot more on advertising as it goes public.

In the filing, writes Pasquarelli, “WeWork wrote that it expects to lay into more 'traditional' marketing as it strives to move beyond the word-of-mouth referrals that have built up its reputation in recent years.”

To attract new members, WeWork indicated, it will have to increase its marketing investment—but a spokeswoman for the company declined to comment on whether it would hire an agency or continue to handle marketing in-house.

Are Dave Portnoy’s tweets helping the Barstool Sports brand?
Sports media company Barstool Sports’ founder Dave Portnoy has been firing off some controversial tweets this week, but while the brand is trending, is the row doing it any long-term good? Ad Age’s Ilyse Liffreing takes a look at the the controversy, which kicked off when Portnoy threatened to fire any of his employees who seek to unionize.

As Liffreing writes, "the Twitter firestorm that erupted next turned into the rambunctious media company’s PR dream,” with the likes of Alexandria Ocasio-Cortez and Donald Trump Jr. weighing in on both sides of the argument. “Portnoy” became a trending topic on Twitter and the company started selling T-Shirts emblazoned with Portnoy’s face.

However, adds Liffreing, “Portnoy’s threats can still land the company in legal trouble, no matter how “on-brand” the comments might be.” Plus, one industry expert warns that his attitude could alienate athletes, the very audience his site covers.

"Airbnb of camping": Jay-Z and Will Smith have both become backers of Hipcamp, a campsite-booking startup that's being dubbed the "Airbnb of camping," reports Business Insider. The celebrities joined the company's $25 million Series B funding round.

Podcast of the day: In this week’s Marketers’ Brief podcast, Shake Shack CMO Jay Livingston tells Ad Age’s Jessica Wohl why he’s excited about the chain’s “next-generation veggie product.” He also talks about his early days grilling patties in the restaurants. You can listen to it here.

Campaign of the day: The New York Times is examining slavery’s history and legacy in America in The 1619 Project, a three-month editorial series anchored by a special issue of The New York Times Magazine. Ad Age’s Ethan Jakob Craft writes that the multimedia effort will include live events and a five-part audio series, marking 400 years since the arrival of slaves in Virginia. Craft talks to investigative journalist Nikole Hannah-Jones, who covers racial injustice for the Times, and NYT Mag Labs Editorial Director Caitlin Roper, about the project here.