Why Binge Drinking PSAs May Leave Some Reaching for Another Drink

Northwestern Study Says Ads' Reliance on Guilt, Shame Lead to Defensive and Damaging Behavior
READ THIS NEXT
Tesla is Interbrand’s fastest-growing brand of 2021

CHICAGO (AdAge.com) -- Public-service ads intended to reduce binge drinking may actually lead to more of it, according to a study out of Northwestern University's Kellogg School of Management that's set for publication in the Journal of Marketing Research later this year. 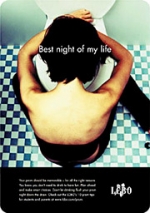 An ad from the Liquor Control Board of Ontario.

The five-part study -- based on interviews with 1,200 undergraduate students shown ads created for the research that were modeled after anti-alcohol ads that ran in Canada -- faults the ads' reliance on "self-conscious" emotions such as guilt and shame to make their point.

It has long been assumed, of course, that guilt and shame were ideal ways of warning of the dangers associated with binge drinking and other harmful behaviors, because they are helpful in spotlighting the associated personal consequences. But this study found the opposite to be true: Viewers already feeling some level of guilt or shame instinctively resist messages that rely on those emotions, and in some cases are more likely to participate in the behavior they're being warned about.

The reason, said Kellogg marketing professor Nidhi Agrawal, is that people who are already feeling guilt or shame resort to something called "defensive processing" when confronted with more of either, and tend to disassociate themselves with whatever they are being shown in order to lessen those emotions.

And it doesn't have to be drinking that a viewer is feeling ashamed about in order to render the ads ineffective or damaging. "If you're talking to a student about cheating on an exam, and one of these ads comes up, you can bet they are headed straight to the bar," said Ms. Agrawal, who conducted the study along with her Indiana University colleague, Adam Duhacheck. 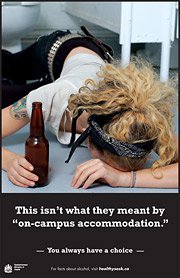 An ad from the Saskatchewan Ministry of Health.

Given that the shaming, consequence-centric approach is commonplace in any number of ads focused on smoking, steroid usage and sexually transmitted diseases, the ramifications of the findings could be significant. "There's a lot of money spent on these ads that could be put to better use," she argues.

Ms. Agrawal suggested two fixes for PSA makers. The first involves media: Ads placed in more-positive surroundings -- such as in a sitcom or a positive magazine article -- have a better chance at resonating than those placed in tense or negative contexts. Second, she said, anti-alcohol groups would be better served focusing their messages around how to avoid situations that lead to binge drinking than on the consequences of the behavior, because attempting to shame people out of binge drinking doesn't work.

"It's important that the messages be toned down and as positive as possible," she said.