It's every advertiser's worst nightmare: consumers so distracted by a dizzying array of media choices that they no longer notice the commercials supporting them. And its time might be closer than you think. 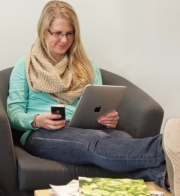 The study of consumer media habits was commissioned by Time Warner 's Time Inc. and conducted by Boston's Innerscope Research. Though it had only 30 participants, the study offers at least directional insight into a generation that always has a smartphone at arm's length and flips from a big TV set to a smaller tablet screen and back again at a moment's notice.

The study's subjects were split evenly between natives and "digital immigrants" (consumers who grew up with old-school technologies, such as TV, radio and print, and adapted to newer ones). Immigrants switched media venues just 17 times per nonworking hour. Put another way, natives switch about 35% more than immigrants.

All participants in the study wore biometric belts that monitored their physical responses as they used media throughout more than 300 hours' worth of nonworking time. They also wore glasses with embedded cameras that kept track of what platform they used, and for how long.

Though hardly definitive, the research paints a worrisome picture for marketers in a world where consumers turn from screen to screen in search of something that captures and retains their attention, yet often cannot find it.

"What they are looking for is engaging content, and they dismiss so much stuff," said Dan Albert, senior VP-media director at Chicago's MARC USA agency.

An executive at one large marketer feels the findings warrant further scrutiny, and could alter marketing processes and media investment in the not-too-distant future.

"If you have consumers who are snacking on short amounts of time with different types of media channels, we have to think about how to communicate in short, "snack-like' bits of messaging," said Patti Wakeling, global director-media insights at Unilever.

Other ideas include surrounding consumers with ads as they migrate from one venue to the next, as long as they're tuned to the same content. American Express, for example, might run a traditional print ad in a magazine, along with short pre-roll videos on the publication's mobile site or smartphone and tablet apps. Coca-Cola could air a regular TV spot in a specific TV show, coupled with banners and pre-rolls in an online stream of next week's highlights.

The study's findings mean "the [creative] bar is set higher" for advertisers, said Innerscope Research CEO Carl Marci. "I'd be most alarmed about the challenging act of capturing the attention and emotional response of my target audience, because it's almost like going from shooting fish in a barrel to little minnows," he said. "The target has become faster, and the window of opportunity for capturing them has become smaller."

A Nielsen survey conducted in fourth-quarter 2011 found that 45% of Americans who owned tablets used them daily while watching TV, with 26% noting simultaneous use of both several times during the day. Smartphone users demonstrated similar habits, according to Nielsen.

The sponsors of Innerscope's study believe that the new devices and the media-hopping they provoke render consumers less available to promotions and entreaties, as well as less inclined to adhere to the traditional beginning-middle-end mode of consuming content.

Young people are using media switching and swapping "to regulate their moods," said Betsy Frank, chief research and insights officer at Time Inc. "They don't let themselves get too high or low if they just switch."The people in Innerscope's study were most likely more upscale and familiar with technology than the average person. As such, the findings present only a suggestion of how consumer behaviors might evolve.

Still, it's one more thing to keep Madison Avenue up at night.