For 10 Years, Its Sub-Sandwich Svengali Has Consistently Kept the Chain's Cash Registers Ringing
READ THIS NEXT
MDC's second quarter revenue plunges and a housing crisis brews: Friday Wake-Up Call
Jared Fogle (right) might be wooden in ads, but he's become irreplaceable for Subway. He's currently on a tour showing off his old jeans.
Credit:

CHICAGO (AdAge.com) -- Subway keeps trying to get off its diet of Jared, but it just can't quit him.

Like him or hate him (love surely isn't an option), the seemingly ubiquitous sandwich-chain spokesman who lost 245 pounds on a diet of heroes is now notching his 10th year with the chain. 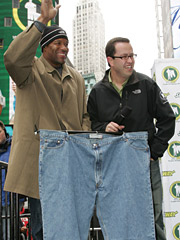 Jared Fogle (right) might be wooden in ads, but he's become irreplaceable for Subway. He's currently on a tour showing off his old jeans.
He's appeared in more than 50 commercials, outlasted four ad agencies and still regularly tops likability and recall ratings. Oh, and since the wooden -- and newly trim -- Mr. Fogle started appearing in its ads, Subway sales have more than doubled to $8.2 billion.

All of which explains why the company and franchisees won't stray from Jared, even though people close to the situation said that senior marketing and agency executives have recommended a shift in direction on several occasions. Problem is, when the chain's tried to move past him, things haven't worked out.

"Whenever the sales get sluggish, we say to 'Put Jared back on TV' and the sales go up, every time," said Hardy Grewal, who owns the Southern California franchise rights to Subway restaurants. "People come in and say 'I lost 10, 20, 30 pounds on Jared's diet and I'm going to follow in his footsteps to lose weight.'"

'Essential,' not everything
Of course, a diet of all-Jared-all-the-time isn't everyone's idea of solid strategy. "Once you have something be as successful as Jared, people say, 'Just run Jared,' but the problem is you can run out a great execution for the brand," said Subway Chief Marketing Officer Tony Pace. "Ever since I've been involved, I've said Jared is essential to what we do but not the entirety of what we do."

To celebrate its decade of Jared, Subway is breaking TV spots featuring well-known athletes congratulating him on his success. The iconic pitchman also has embarked on a "Tour de Pants" that kicked off in New York last week. At year end, Mr. Fogle will retire his trousers -- likely to a museum.

"The great thing about pairing him with athletes was it took some of the performance off him," Mr. Pace said. "If you look through the old reels, I think we were asking him to do too much and carry the entire commercial, and in the TiVo/YouTube world you have to have some entertainment to keep people engaged." Some older Jared ads, Mr. Pace admitted, made him look "stiff" and "formal."

Given all that, what makes him such a sub-sandwich Svengali?

Appealing to women
Darren Tristano, exec VP of Technomic, said he's unique in his ability to appeal to women without being threatening to men. Ad Age's own Bob Garfield put it differently. "Fat guy gets skinny eating fast food. It's irresistible. He's also an adequate presenter with plenty of personality and an easy smile. What he lacks is, you know, talent."

But Jared is memorable. "He has such an unbelievably high recognition score," said a former account executive on the Subway business. "He got into people's consciousness in a way that was really surprising."

According to IAG Research, Subway won the quick-service category's highest rankings for recall and likability in 2006. In 2007, the company was third overall, behind Burger King and Wendy's. In 2008 to date, Subway is in second place behind Burger King.

Tim Calkins, a clinical marketing professor at Northwestern University's Kellogg School of Management, pointed out that Mr. Fogle has also proved to be a reliable steward of the brand. "You don't hear of Jared off using cocaine at a nightclub or something," he said.

From Mr. Fogle's perspective, consumers like him because he's a regular guy who still lives in Indianapolis. "People relate to my story," he said. "They're very eager to say hi, they want a picture, they want to know that I did do what I said I did."

Staying power
And apart from admitting that he wishes his celebrity had an "off switch," Mr. Fogle seems like he's here to stay -- which is more than can be said for several of Subway's ad agencies. Since early 2000, Jared has outlasted Publicis & Hal Riney, Chicago; Euro RSCG, New York; Fallon, Minneapolis; and Goodby, Silverstein & Partners, San Francisco.

While none of those agencies was willing to talk about their Subway experience, it's said that Jared was a sore spot among creative shops that wanted to put their own spin on the account. Though different approaches were tried -- remember Gilbert Gotfried voicing a shadow puppet or the man washing his car in a cheerleader uniform? -- all roads led back to Jared.

"Those agencies wanted nothing to do with Jared. They were dragged kicking and screaming into it," said an executive familiar with the situation. "They didn't put their A-team on it, and that was part of the issue."

Chris Carroll, who was Subway's CMO prior to Mr. Pace, told a National Restaurant Association convention in 2005 that when Jared went off the air in that year, same-store sales fell 10% until he was reinstated.

"We haven't tried to replace Jared. What we've tried to do is continually expand beyond a primary low-fat message," Mr. Carroll said at the time. "I've always had the luxury of being able to rely on the Jared work to drive the business." Mr. Carroll, who is now CMO at Cosi, did not return calls for comment.

'Not just about weight'
After the campaign was conceived by Hal Riney in late 1999, the account was moved to Publicis, where the chain enjoyed great success for several years. When the chain's growth plateaued, the account was pulled into review. Fallon and Goodby each had a short stint with the business before it landed with the current agency, McCarthy Mambro Bertino, Boston, which has held the account since 2005. MMB began working for the chain on an ancillary capacity in 2003.

"When we came onboard Jared wasn't as primary a focus as he has become over the past few years," said Chad Caufield, managing director. "He was being used a lot more sporadically and a lot more strategically after his initial success and I think we brought him back in a very concerted way ... and gave him some things to keep it fresh, not just about weight."

And of course, it's easy to blame Jared for putting in a crimp in your creative, but the realities of fast-food advertising also have to be taken into account.

For agencies, "the appeal of Subway was 'We can do better, we can take them to the next brand level,'" said someone familiar with the account. "But you're always going to go back to $2.99."