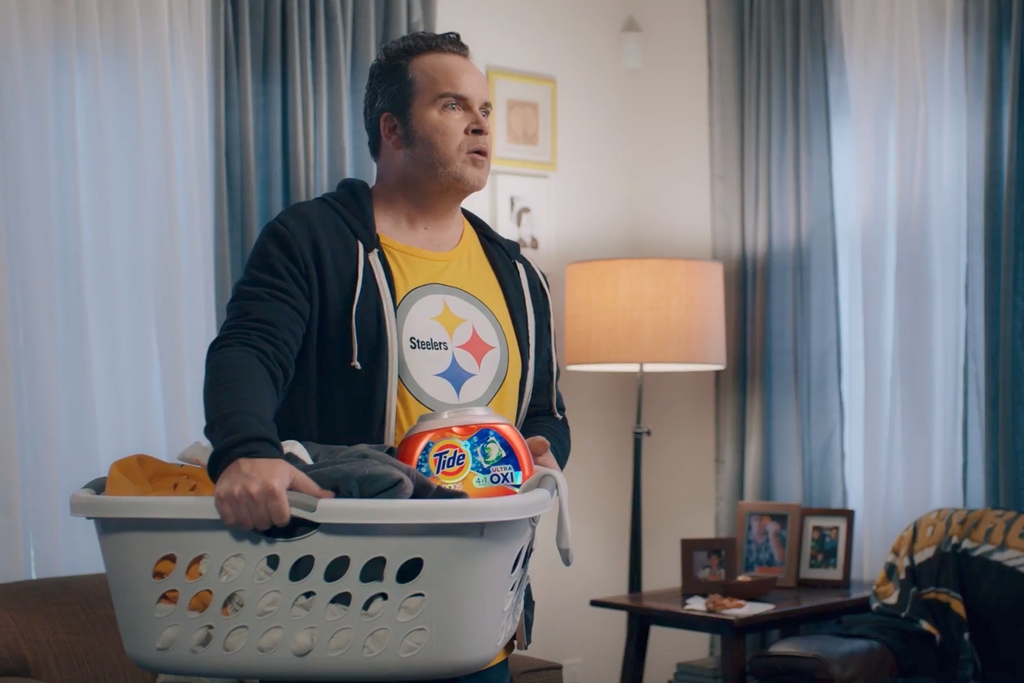 It’s a Tide ad (again)
Sunday night is the busiest laundry night for Americans, Procter & Gamble says. But P&G's Tide brand is trying to convince people to change their ways. In a Tide ad that ran during NBC's Sunday Night Football, former quarterback Peyton Manning proclaims that laundry night is being moved to Tuesday, so people can devote their Sundays to the National Football League. "Sundays are now 100 percent NFL—Not For Laundry," he says. (Get it?)

But wait, there's more. As Ad Age’s Jack Neff writes, the brand followed that up with a spot in which “The Voice” judge Gwen Stefani complains about Manning infringing on her show’s Tuesday night time spot. And on it went, with more faux squabbling about the proper laundry night. It was all very meta.

Tide's campaign, which enlisted the NFL and NBC, comes from P&G multi-agency shop Woven. So where is this heading? Hmmm. As someone tweeted, if the campaign "doesn't end with an epic Super Bowl commercial I'm going to be very disappointed.”

On a more serious note: How to cope with a recession
Amid the warning signs that the U.S. might be heading into a recession, Ad Age put together a survival guide looking at how agencies, brands, digital media, television and retailers might face a downturn. The experts shared some sobering thoughts. Consider this:

Agencies could lose 3 percent to 30 percent of their revenue during a recession as brands shift to more project work, says Keith Johnston, global CMO practice leader at Forrester. “The needs of the clients shift drastically in a recession,” he says. “There’s already a call for more efficient, measurable media. There’s going to be a greater squeeze on that.”

Also read Interpublic Group of Cos. Chairman-CEO Michael Roth’s POV in an interview with Lindsay Rittenhouse. He says the economy’s woes have come on gradually this time (unlike in 2008), allowing the company to plan ahead. “Everyone knows it’s coming; if not now, it’ll be coming a year or two from now,” he says.

Google cracks down
Google says it will no longer allow ads for “‘unproven or experimental medical techniques,’ including most stem cell therapy, cellular therapy and gene therapy,” The Washington Post reported Friday. Google also wrote a post explaining the move, saying it has “seen a rise in bad actors attempting to take advantage of individuals by offering untested, deceptive treatments. Often times, these treatments can lead to dangerous health outcomes and we feel they have no place on our platforms.”

There’s a precedent here. A few years ago, major Chinese search engine Baidu faced intense public backlash for a case in which a student died after seeing an ad for an unproven cancer treatment and seeking it out; the public felt Baidu placed revenue above people's well-being, and its fortunes have been on a downward spiral ever since. In an age of close scrutiny of tech giants, Google certainly doesn’t need another scandal.

Just briefly:
Seriously?: Forbes’ list of America’s top 100 innovative leaders included only one woman. One. (To quote Cindy Gallop, it's “un-bloody-believable.”) Responding to a torrent of criticism, the magazine's editor acknowledged the methodology was flawed.

'Teflon': Despite several scandals, including one over its role in the opioid crisis, Johnson & Johnson’s reputation with the U.S. public hasn’t been noticeably impacted, a survey from Morning Consult suggests. “J&J might as well be making Teflon, because, at least by some measures, nothing negative seems to stick to its corporate reputation,” Ad Age’s Jack Neff writes. Advertising might have something to do with that.

Agency wins: TripAdvisor has consolidated its global media account with Havas Media Group after a review. As Adrianne Pasquarelli writes in Ad Age, Havas already had much of the account, and now it’s the global media agency of record.

Meanwhile at Target: The Target Circle loyalty program, which has been testing in some cities, goes nationwide Oct. 6, in time for Black Friday and the holidays,  Ad Age’s Adrianne Pasquarelli reports.

Most creative: Chase bank’s touching ad about Serena Williams becoming a mom (and remaining a champion) is No. 2 on Ad Age’s list of the most creative brand ideas of the week, compiled by I-Hsien Sherwood and Max Sternlicht. Check out the full Creativity Top 5 list here.

Ad of the day: In Germany, Burger King is once again mocking McDonald’s and its (arguably creepy) clown mascot, Ronald McDonald. As Ad Age’s Alexandra Jardine writes, the stunt from local shop Grabarz & Partner is tied to the release of “It Chapter Two,” the horror flick about a killer clown. The geo-targeted campaign directs McDonald’s customers to “Escape the Clown” and head to Burger King instead for one-cent Whoppers. Which leads us to our vocabulary word of the day: coulrophobia, which means the fear of clowns.