READ THIS NEXT
McDonald’s warns U.S. franchisees of higher bills next year 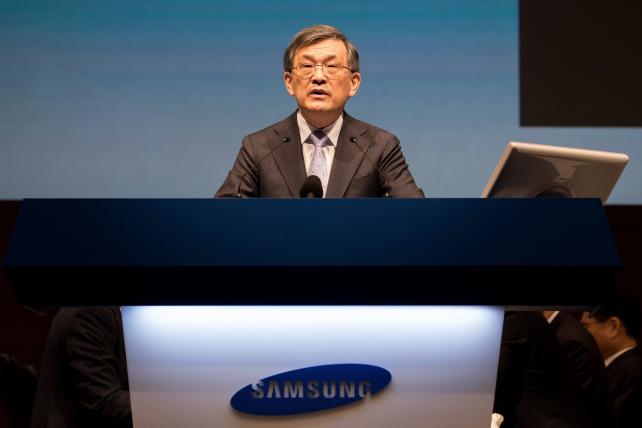 The chief executive officer of Samsung Electronics Co. is stepping down in a surprise resignation after decades at the company, saying the business needed new leadership following a bribery scandal that led to the imprisonment of its de facto chief.

Kwon Oh-hyun, who also serves as co-vice chairman, announced his retirement on Friday as the Suwon-based company reported record operating income of $12.8 billion on booming demand for displays and memory chips. He said the company faces an "unprecedented crisis" despite the financial success.

Kwon had emerged as the public face of Samsung Electronics after Jay Y. Lee, grandson of the company's founder, was detained on corruption charges and then sentenced to five years in prison in August amid a scandal that brought down South Korea's president. While the latest financial results show Samsung's business units operating smoothly, that in itself may present risks for Kwon, said Park Ju-gun, who tracks corporate executives at CEOScore.

"Nobody wants to be the chief of Samsung Electronics at a time like this; it's too risky," said Park. "It puts that person at odds with the controlling family. Only when he is in the shadow is he playing his role properly."

Kwon, a semiconductor engineer who turns 65 this month, has met with President Moon Jae-in and attended events both at home and abroad since Lee was detained in February on corruption charges. Kwon will resign from the management board in March next year when his term ends, the company said.

"As we are confronted with unprecedented crisis inside out, I believe that time has now come for the company start anew, with a new spirit and young leadership to better respond to challenges arising from the rapidly changing IT industry," Kwon said in the statement.

Samsung has had a long tradition of stressing crisis even in good times for the business. Chairman Lee Kun-hee, who transformed the company from a copycat appliance maker to a global technology leader, said in 2010 that Samsung was entering a "real crisis," just after the company achieved record annual sales.

"It's definitely unexpected," Newman said. "I think the company is going to be fine. The company just needs to find a way to fill this hole that Kwon is leaving."

Samsung Electronics is the crown jewel of a conglomerate comprised of about 60 units selling selling life insurance, cargo ships and clothes.

Despite the trial, the company's business has remained robust, helped by strong demand for memory chips.

"It's the chip prices that are driving up the profit rather than the sales volumes," said Park Kang-ho, an analyst at Daishin Securities.

Samsung also leads in the next generation of screens called organic light-emitting diode displays, supplying them to Apple and other smartphone makers, even as it competes for dominance in the global market. It's also seeking to release a phone with a bendable display next year to tighten the lead with Apple and fend off challenges from Huawei Technologies Co., Oppo and other Chinese rivals.

Samsung is counting on the S8 and Note 8 smartphones released this year to recover from last year's debacle with the Note 7. The company may benefit if Apple is unable to deliver a high volume of iPhone X smartphones as planned this year.