Got a hankering for a Taco Bell Taco Grande, but can't get to one of the chain's 5,500 locations? Just buy a "dinner kit" at grocery stores to make one at home.

That's one of the new products from Kraft Foods Group and Yum Brands' Taco Bell launching this week. What started as a few items on the shelf in the grocery store in 1996 has turned into a partnership that offers 28 Taco Bell-branded products ranging from sauces to "dessert kits" that only require the addition of ice cream.

Kraft also this week is launching the first major digital campaign for the partnership called "Bottled Awesome," which focuses on the sauces and targets the "Taco Bell enthusiast."

"Taco Bell sees the power in bringing the brand outside of [the quick-service category] and into retail," said Adam Grablick, senior Taco Bell brand manager at Kraft. He noted that for Kraft, the partnership is a big opportunity to grow sales because "the mainstream Mexican category is a fast-growing segment."

The campaign, created by Publicis Groupe's DigitasLBi, includes display ads for both desktop and mobile devices, and a hefty social-media campaign that includes a @TacoBellGrocery Twitter feed, a Taco Bell Grocery Tumblr page, and Instagram and Vine accounts, along with a Facebook page. As of now, no TV campaign is in the works. The company wants to measure the success of the current campaign before delving into TV, said Mr. Grablick. 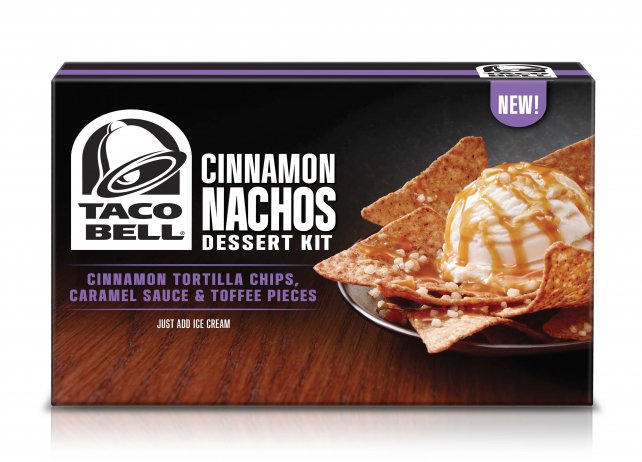 Taco Bell and Kraft renewed the partnership in 2013 with the intention of expanding it, and in September launched two shelf-stable dessert kits. Mr. Grablick said they are a first of their kind in mainstream Mexican desserts: Taco Bell Cinnamon Nachos Dessert Kit and the Taco Bell Chocolate Taco Dessert Kit. The chain also in the third quarter launched a Taco Bell Fire Sauce and Taco Bell Verde Salsa. Other items in the long-standing partnership include Taco Bell-branded taco shells.

This isn't the only packaged-food company that Taco Bell is partnering with. It has worked with PepsiCo's Frito-Lay over the years, offering products like the Beefy Crunch Burrito, though the biggest product by far from that partnership is the Doritos Locos Tacos line launched in 2012.

Nor is this Kraft's only fast-food partnership. Kraft and McDonald's are testing packaged coffees in the grocery aisle in select markets in the U.S., after it started selling McDonald's-branded coffee in some of its Canadian stores. Kraft is handling the marketing and distribution of the McDonald's coffees.

Kraft also had a distribution deal with Starbucks to bring its coffee to thousands of grocery stores, but that deal went sour when the coffee giant began seeking to get out of the deal in 2010, alleging that Kraft didn't effectively market its brands. Starbucks in November was ordered to pay Kraft $2.7 billion for "improper termination."

Mr. Grablick said that for now, there are no plans to bring any Kraft products to Taco Bell's restaurants, as the company wants to first "prove them out" in-store before potentially bringing any partnerships to the chain's locations.