If you were to name an area in the world that needed more tacos, Mexico probably wouldn't be it -- unless you're Taco Bell.

The Yum Brands chain has made a run for the border, with a location in Monterrey, Mexico. More are planned for the country in the future, although the locations have yet to be identified.

Running for the border, for real: Taco Bell's push into Mexico is perplexing to some.

"We're not trying to be authentic Mexican food," said Rob Poetsch, director-public relations at Taco Bell. "So we're not competing with taquerias. We're a quick-service restaurant, and value and convenience are our core pillars."

Promising signs
He said Taco Bell, which has about 230 locations outside the U.S., is eyeing several international markets, but the decision to expand to Mexico was made only after the chain conducted consumer research. "We've taken the concept, the brand and the menu to Mexican consumers and asked them what they thought of it, and the reception we've gotten has been very encouraging," he said.

Not everyone thinks so. "I don't think it's going to be successful," said Scott Montgomery, chief creative officer for Brandtailers, an Irvine, Calif.-based agency, who worked on Taco Bell's advertising business during stints at Grey and FCB, both Los Angeles. "It's like Mexicans coming up and trying to sell us hot dogs."

This idea has failed before. Taco Bell made a push into Mexico in the 1990s but closed up shop within a few years. Mr. Poetsch, however, said things are different now because the brand has changed and there's a consumer-research team in place. Taco Bell also has lined up franchisees eager to get started.

Tacos through the fence
But Mr. Montgomery said the current climate can only be worse than it was 10 years ago. Taco Bell's last try was during the early days of North American Free Trade Agreement. The U.S.'s current relationship with Mexico has been marked by an inability to pass temporary-worker legislation and tougher enforcement of immigration laws.

"We're putting up a fence so they can't get through, but we're going to push tacos through the fence," Mr. Montgomery said. "It's offensive."

While other brands such as McDonald's, Burger King and even sibling brands KFC and Pizza Hut are pushing deeper into China, Russia and India, some experts have been surprised at Taco Bell's enthusiasm for the Mexican market. "This would have a better chance in Zimbabwe," Mr. Montgomery said.

Larry Miller, an analyst with RBC Capital Markets, said Taco Bell, as an Americanized version of Mexican food, has been considered a tough sell for foreign markets, although he considers the chain to be one of the most differentiated concepts in the U.S.

China better bet
While Mr. Miller said Wall Street isn't too concerned with Taco Bell's foray into Mexico, he thinks the Chinese version, Taco Bell Grand, stands a better chance. The Chinese concept is a casual-dining restaurant like an On the Border, Mr. Miller said. "My guess is they'll probably have better success in China than in Mexico, unless they can get it to be adopted as something American," he said.

The chain has had its own problems in the domestic market, with an outbreak of E. coli last year and an East Coast rat infestation this spring, but it's hard to gauge the impact, considering that Yum did not break out same-store sales for the chain in its last earnings statement.

"It's been a really tough year for Taco Bell," Mr. Miller said. "The question is how long it's going to take to regain the consumer confidence it once had, and it's going to take a few years because we're already a year into it."

Maybe it can work after all

While an American company selling tacos to Mexicans may sound like selling ice at the North Pole, consider that California wines are accepted (by some) in France and gyros are commonplace in Greece. It has been done before. 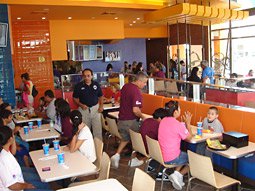 Perhaps that's why Louisville, Ky.-based Yum Brands is going for the cultural equivalent of a twofer. Yum has opened a number of fast-food Chinese restaurants in Shanghai. Yum execs are bullish about the prospects.

"We continue to expand our East dining concept in the Shanghai market," Yum CEO David Novak said during the third-quarter-earnings call. "In fact, we now have eight restaurants, which moves us closer to being able to conduct a television advertising test."

Larry Miler, an analyst with RBC Capital Markets, said the idea might just work, because the concept offers authentic local food. The concept, for example, eschews sodas in favor of soymilk, tea and plum juice.

But sometimes it takes a lack of authenticity to ring true. Bobby Calder, professor of marketing at Northwestern University's Kellogg School of Management, said that while cultural preferences change, sometimes homegrown concepts that have been through the ringer somewhere else look fresh and new.

The best example of a reviled American product that eventually gained at least pseudo-acceptance is California wine in France. Sparkling wine, of course, is still a different story, but some California varietals are faring reasonably well.

"Today, California wines make much more sense to the French than they did in the 1960s, '70s and '80s," Mr. Calder said, adding that American-invented gyros are now accepted, if not wildly popular, in Greece.

"Culture doesn't stand still," Mr. Calder said. "Something from another culture may actually pull you into that change process, whether it's types of food, or retailing practices. ... People have a sense of moving on, so what happens is something from another country may look fresher, kind of like the future."

The real danger, Mr. Calder added, is with so-called country brands, like French Champagne, Swiss watches, or even Frango mints from Chicago. These products are an integral part of local pride and an outsider's version of these products, he said, "would really raise a red flag."

Pizza Hut marketed to Italians wouldn't fall into this category because it's no secret that Americans co-opted pizza decades ago.

"Italians even think of it that way -- that there is American pizza," Mr. Calder said.

For the record, Pizza Hut does not have locations in Italy. At least not yet.