Will Retired Regis Continue Laughing All the Way to TD Bank? | Ad Age
Skip to main content
Sign In Register

Will Retired Regis Continue Laughing All the Way to TD Bank?

YORK, Pa. (AdAge.com) -- Regis Philbin yesterday announced he is retiring from the TV talk-show game and from "Live With Regis & Kelly" after 28 years with the show, but that doesn't mean you won't still see his face on the tube. 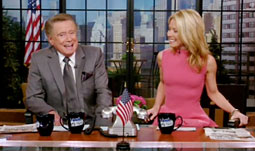 After 28 years with the show, Regis Philbin announced his retirement from 'Live With Regis & Kelly.'
The 77-year-old celebrity has endorsed dozens of products, which began along with his career as Joey Bishop's TV-show sidekick in 1961 and an endorsement the two did for Hai Karate ("Be Careful How You Use It") with Mr. Philbin slathering the cologne on Mr. Bishop, who was then besieged by young women from the audience.

Since then Mr. Philbin has appeared in ads for products including Nabisco's Harvest Crisp crackers, the Jenny Craig diet plan, Aspercreme, Earth Grain bagels, Pepsi, 7-Up Plus, ByeByeNow.com online travel, Take Control margarine, Washington Mutual and the Hummer H2. He even hosted a popular half-hour infomercial in the late '90s selling the CD collection "The Fabulous Fifties" for Time Life.

However, his most recent and maybe most recognizable spokesman role has been playing himself for TD Bank and before that its predecessor, prior to its name change, Commerce Bank. He and soon-to-be-former co-host Kelly Ripa most recently appeared in spots this past fall extolling TD Bank's easy online banking and round-the-clock service.

So will Mr. Philbin as an unemployed retiree continue to rep for the bank?

TD Bank seems to be on the fence.

A spokeswoman in an email response to questions said: "As we recently learned of Regis' impending retirement, we are weighing all our options, and haven't made any decisions yet. Regis and Kelly have been great ambassadors for us over the year and have helped us leverage our brand and value proposition of TD Bank, America's Most Convenient Bank, with great success. We wish Regis all the best in the next journey of his life and career."