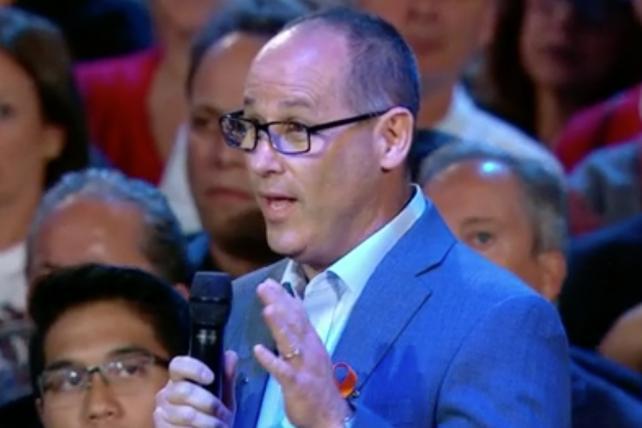 As The New York Times reports, Fred Guttenberg, whose 14-year-old daughter Jaime was killed during the shooting that left 17 dead, was applauded by the crowd as he demanded that the Florida senator explain his opposition to legislation banning assault weapons like that used by the gunman. Rubio, meanwhile, was booed when he said that "gun laws alone" can not help prevent such shootings, the Times says.

Meanwhile, YouTube admitted it mistakenly promoted a video on the Florida shooting that labeled Marjory Stoneman Douglas High School student David Hogg an "actor." As Ad Age's Garrett Sloane reported, the "David Hogg the actor" video, which used a local California CBS news report from six months ago that featured a story unrelated to the Florida shooting, was the No. 1 trending video on YouTube for a time on Wednesday. YouTube also autosuggested certain search terms that would lead people directly to the clip. Sloane reports that it and "many other [videos] claim to 'expose' Hogg as a 'crisis actor,' the term conspiracy theorists use to discount firsthand accounts by people in news stories that they insist are hoaxes. YouTube eventually removed that particular video, but not before it amassed nearly 200,000 views."

Vox Media has laid off 50 employees, or 5 percent of its workforce, with publications including Racked, Curbed and SB Nation hit hardest. As Ad Age's George Slefo reports, the cuts mainly focused on staffers who made social-media videos at smaller brands. Vox Media CEO Jim Bankoff issued a memo about the layoffs, saying, "It has become clear, due to industry changes over the past few months and our long term budgeting process, that those initiatives won't be viable audience or revenue growth drivers for us relative to other investments we are making."

KFC's "one job": KFC tried to deflect increasing U.K. consumer anger over its restaurant closures in its latest Twitter post, headlined, "There's gossip in the hen house, here's the facts..." It then answered the question, "'You had one job KFC. How did you run out of chicken? Fix it now!" Its answer, in part: "We've got the chicken, we've got the restaurants, but we've just had issues getting them together. We're working flat out to get it fixed." Late-night hosts, of course, are not pulling any punches.

Hey KFC - we've got tons of lawmakers who are too chicken to stand up to the NRA. They're all yours! https://t.co/UvVIFlWQm6

Unilever HQ decision imminent: Unilever will decide in the next few weeks whether to move its HQ from London to the Netherlands as a result of Brexit. The Financial Times reports that the issue is expected to be decided at the next scheduled board meeting in the second week of March, and says that the U.K. government is "braced" for the Anglo-Dutch consumer goods giant to move to Rotterdam.

Apple's cobalt talks: Apple is in talks to buy cobalt directly from miners, reports Bloomberg, in hopes of ensuring ample supply of the key battery ingredient for its iPhones and iPads. Rapid growth in battery demand for electric vehicles threatens to create a shortage of the raw material.

Creativity Pick of the Day: "Tomb Raider" star Alicia Vikander has reunited with director Niclas Larsson for a sequel to her 2016 short film for Vogue, in which she became obsessed with a fortune telling machine. In "Magic Diner Part II," the Swedish actor plays a version of herself in which she's so successful that she's on all the front pages and even the Nobel Prize Committee wants to talk to her. But what will she do when the fortune machine runs out of cards? "Vogue" editor Anna Wintour (who graced front pages herself this week, after sitting next to the Queen of England at London Fashion Week) has a cameo in the piece.