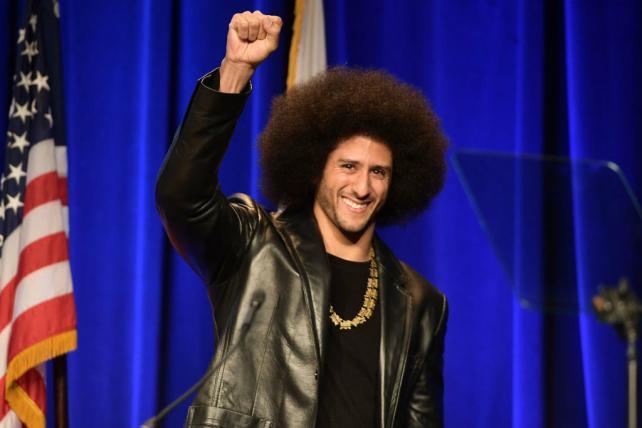 Welcome to Ad Age's Wake-Up Call, our daily roundup of advertising, marketing, media and digital news. You can get an audio version of this briefing on your Alexa device. Search for "Ad Age" under "Skills" in the Alexa app. What people are talking about today: Colin Kaepernick wants to trademark himself. To be precise, his company filed for the trademark to a black-and-white likeness of his face and halo of hair, ESPN reports. The filing at the U.S. Patent and Trademark Office suggests the image could be used on "everything from shampoo and hairspray to jewelry and lampshades," as well as for TV shows, movies and more, the report says.

Kaepernick, the former NFL quarterback thrust into the spotlight for kneeling during the national anthem to protest inequality, is also an endorser for Nike. Trademarking his own image could give him a new platform for his activism and a new stream of income. Since his protests made him a controversial figure, nobody's hiring him to do the job he originally intended, which is playing pro football.

In other trademark news: Procter & Gamble has filed to trademark the internet catchphrases NSFW, FOMO, FTW and TLDR for household products. Which raises a curious question: Which household products, exactly, are not safe for work, and why? Read more about it in the Ad Age Marketer's Brief, which asks, "What would Mr. Clean say?"

Another Netflix-ish service
If Netflix, Amazon Prime video and Hulu aren't enough to satisfy the couch potato in you, new options are on the way. The Walt Disney Co. has a project in the works, and now AT&T's WarnerMedia, which owns entertainment properties including HBO and the Harry Potter movies, says it will start up a new subscription streaming service with entertainment content in the last quarter of 2019. As Bloomberg News writes, "AT&T, which completed its acquisition of Time Warner in June, also is looking for payoff from the $85 billion deal."

The new service doesn't have a name yet. Might there be opportunities for advertisers? Details are still sketchy. AT&T has an ambitious ad and analytics unit, which it just named Xandr. And Xandr CEO Brian Lesser said at Advertising Week New York that he doesn't believe the economics of streaming-on-demand platforms like Netflix can work long-term without ads. So it's something to watch. (For more on Lesser's plans, read Ad Age's profile of the AT&T exec here.)

Vertical TV
Snapchat has been releasing its own short TV-esque shows, with a focus on reality TV, lifestyle and news. Now it's launching scripted original series too. As Quartz writes, Snapchat is

"rolling out about half a dozen shows this month that were made by TV creators specifically for Snapchat, and another six are slated to follow. They include a docuseries about teenage drag queens from the producers of Keeping Up With the Kardashians, a drama about a true-crime podcast that turns all-too real, a series of horror shorts, and a comedy about college life, among others."

The shows are brief and broadcast in a phone-friendly vertical format, and there are unskippable ads. Snapchat could use some engaging content; as Business Insider pointed out, the company has shed over $13 billion in market value since Kylie Jenner tweeted in February about hating the Snapchat redesign. ("Sooo does anyone else not open Snapchat anymore?" she asked.)

Just briefly:
A plunge: "Technology stocks got clobbered on Wednesday, suffering their worst day in more than seven years," CNBC writes. Alphabet, Amazon, Apple, Facebook and Microsoft all dropped over 4 percent each.

FBI: "The Association of National Advertisers says the FBI has contacted its outside counsel to request cooperation of the trade association and its members in what it calls a 'criminal investigation into media buying practices,'" Ad Age's Megan Graham writes. The investigation is reportedly looking at non-transparent practices like rebates.

Win of the day: After a review, American Express picked Interpublic Group of Co.'s UM as its new global agency for strategic media planning and buying, Adrianne Pasquarelli and Megan Graham write in Ad Age.

New at Facebook: Facebook has some new initiatives to try to demystify its platform and its ad formats for small agencies and independent consultants. Read about it from Garett Sloane in Ad Age.

Shuffle: Hearst magazines had a shakeup and dropped three top editors, including Michele Promaulayko, editor-in-chief of Cosmopolitan. Read more from HuffPost. Meanwhile at Condé Nast, Lindsay Peoples Wagner of New York Magazine and The Cut will become editor of Teen Vogue, replacing Phillip Picardi, who is moving to Out Magazine.

Bad news: Newsweek's former parent company, IBT Media, "has been charged by Manhattan prosecutors with carrying out a complex scheme to defraud lenders out of millions of dollars," The New York Times reports.

All 'Jersey Shore,' all the time: "Viacom is rebranding its Awestruck YouTube channel, which caters to millennial moms, to a dedicated 'Jersey Shore' hub," Ad Age's Jeanine Poggi writes.

Headline of the day: From Bloomberg News: "Millennials kill again. The latest victim? American cheese." (Millennials, if you're really behind this, thank you.)

Ad of the day: Houston-based filmmaker Richard Linklater ("Boyhood," "Before Sunrise") lent his talents to an ad for the Fire Ted Cruz PAC, which opposes the Republican senator from Texas.
Ad Age's Simon Dumenco says "it's unlike most of the political attack ads flooding the airwaves and social media these days, in that it's entirely understated (no menacing soundtrack or quick-cut montage of a politician looking shady here). It's perfectly cast. And, well, it's just really funny." Watch it here.