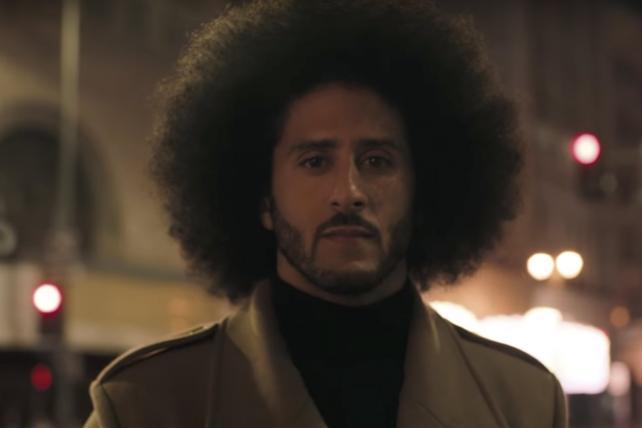 Welcome to Ad Age's Wake-Up Call, our daily roundup of advertising, marketing, media and digital news. You can get an audio version of this briefing on your Alexa device. Search for "Ad Age" under "Skills" in the Alexa app. What people are talking about today: It's been a while since an ad campaign provoked as many strong feelings and as much political debate as Nike's Colin Kaepernick ad has. Nike kept the debate alive by rolling out elements of the ad over a few days; yesterday it released a 2-minute version called "Dream Crazy" narrated by Kaepernick, who started the NFL anthem protests against racism, social injustice and police brutality. (Who was surprised by the reveal that it was Kaepernick doing the voiceover? We've all seen the images of him kneeling during the national anthem, but we haven't heard his voice much.)
As Ad Age's E.J. Schultz and Adrianne Pasquarelli write, the spot will air during the NFL season opener tonight on NBC. The full-length ad, they write,

"showcases recognizable athletes such as LeBron James and Serena Williams alongside others including Megan Blunk, a wheelchair basketball player, and Isaiah Bird, a wrestler who does not have legs. 'What non-believers fail to understand is that calling a dream crazy is not an insult—it's a compliment,' Kaepernick says in the spot."

The Wieden & Kennedy ad shows Kaepernick standing on a city street, gazing at the image of a rippling American flag, a reference to the anthem protests. Nike has stepped squarely into the polarizing debate about what patriotism is and who the heroes are. It's a fascinating way to sell sneakers.
What Trump says: President Trump, who says NFL protesters are being disrespectful by demonstrating during the national anthem, took another jab at the NFL, Nike and its ad, writing on Twitter that Nike "is getting absolutely killed with anger and boycotts," as Ad Age's Anthony Crupi writes.
What Trump Jr. says: On Instagram, "President Trump's eldest son on Wednesday posted a doctored version of Nike's new ad that featured his father in place of former NFL quarterback Colin Kaepernick," The Hill writes. The ad's tagline is "Believe in something. Even if it means sacrificing everything." Donald Trump Jr. added a comment to his handiwork: "There, fixed it for you. #maga."

Meanwhile on Capitol Hill
When Facebook Chief Operating Officer Sheryl Sandberg and Twitter CEO Jack Dorsey testified before a Senate committee about foreign interference in U.S. elections, they won praise from lawmakers "for just showing up," as Ad Age's Garett Sloane writes. Google's seat was empty, because it declined to send someone deemed senior enough. Sloane ticks off six things to know about what happened at Wednesday's hearing; Dorsey, for example, said Twitter "could rethink some of its core features, even how much it should emphasize 'follower counts.'" Sloane also notes a few odd moments, like how far-right conspiracy theorist Alex Jones showed up and called Sen. Marco Rubio a "little gangster thug" after the hearing.
Also: "Attorney General Jeff Sessions said he plans to gather state attorneys general this month to examine what the Justice Department called the intentional 'stifling' of voices on social media," The Wall Street Journal writes. Some conservatives have long insisted that social media is biased against their viewpoints.

Goop
Gwyneth Paltrow's lifestyle brand Goop and its much-discussed vaginal eggs are back in the news. The company reportedly signed a settlement related to the health claims it used to advertise the products (which are not actually eggs, but smooth egg-shaped pieces of jade and quartz designed for insertion into the yoni). The New York Times reports that Goop

"agreed to pay $145,000 in civil penalties in a settlement in California after an investigation found its claims about some of the products it sells were not backed by scientific evidence, the Orange County district attorney's office said. … Two items were 'eggs' for vaginal wellness — one made of jade and another made of quartz — that the company said would balance hormones, increase bladder control and regulate menstrual cycles."

The company told The Times it hasn't received any complaints about the products, which sell for $55 for rose quartz and $66 for jade. "Be sure to follow the instructions included with your egg," the site advises. Because yes, the eggs are still available for purchase on Goop.com, though the product description doesn't include any health claims. And the new attention will probably help sell more of them. On Elle.com's story about the settlement, there's a "shop now" button where you can click through to buy one.

Just briefly:
Truce?: CBS Corp. is in talks with Shari Redstone and her family's holding company, National Amusements, to try to settle their legal dispute, The Wall Street Journal writes. "A deal would end a bitter corporate feud that threatens to erupt into an even messier courtroom battle, and go a long way to clarify who will call the shots at CBS at a pivotal moment in the media industry," The Journal writes.

Decluttering: Amazon just debuted Amazon Advertising, "which encompasses all the parts of an ad business that previously operated in isolation: Amazon Media Group, Amazon Marketing Services and Amazon Ad Platform," Ad Age's Garett Sloane writes. Amazon is ramping up its ad business, and the rebrand is designed to make Amazon's offers simpler for advertisers to understand.

Branch, meet Tune: "Branch, a four-year-old company that in February became Facebook's first new mobile measurement partner since 2013, is acquiring the mobile attribution business of Tune, which was once penalized by the social network," Ad Age's George Slefo reports.

Really?: About a quarter of Facebook-using U.S. adults say they have deleted the Facebook app from their cellphone in the past year—at least, according to a Pew Research Center study. Read more here.

ESPN: Rita Ferro is taking over ESPN ad sales as Ed Erhardt prepares to retire next year, Ad Age's Jeanine Poggi writes. And that means "ESPN inventory will be sold alongside ABC and Disney's other cable networks, an effort that has been attempted in the past, but not fully realized."

Inclusion: WarnerMedia, which groups Warner Bros., Turner and HBO, "has unveiled a company-wide policy outlining its commitment to diversity and inclusion in front of and behind the camera," The Hollywood Reporter writes.

If you can't beat 'em: "J.Crew Group Inc. has decided to sell a limited selection of clothing on Amazon.com Inc., betting the potential benefits outweigh the risks of partnering with the retail industry's biggest foe," The Wall Street Journal writes.

Beats + the NBA: Beats by Dre will be the official headphone, wireless speaker and audio partner of the NBA, WNBA, NBA G League and USA Basketball starting next month, and that could impact its advertising, Ad Age's E.J. Schultz reports. Beats takes over for Harman.

Creativity pick of the day: What's not to love? A new ad from U.K. retailer John Lewis and its supermarket brand Waitrose features an inspired school performance of Queen's "Bohemian Rhapsody," with great costumes, enthusiasm and talent. As Ad Age's Alexandra Jardine writes, "When it comes to school drama performances, the bar just rose a little bit higher." The tagline is "when you're part of it, you put your heart into it" -- that's a reference to the fact that employees of John Lewis and Waitrose have a stake in the business. Watch it here.