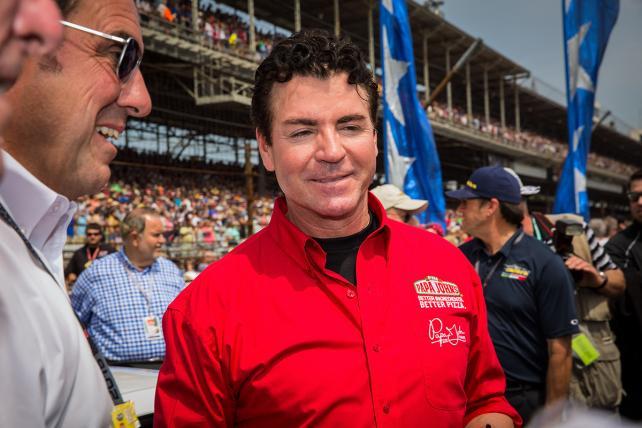 Welcome to Ad Age's Wake-Up Call, our daily roundup of advertising, marketing, media and digital news. You can get an audio version of this briefing on your Alexa device. Search for "Ad Age" under "Skills" in the Alexa app. What people are talking about today: John Schnatter, who founded Papa John's more than three decades ago, resigned as chairman of the board late Wednesday after using the "n" word on a conference call.
Ad Age's Jessica Wohl writes that the move comes after a Forbes report that Schnatter used the "n"-word during a May conference call with Laundry Service, which was the company's creative agency at the time. Schnatter said during the call: "'Colonel Sanders called blacks n-----s [and never] faced public backlash.' "
Schnatter did not deny the report and had at first apologized in a statement for his "inappropriate and hurtful language" during what was called a media training session regarding race. "Regardless of the context, I apologize. Simply stated, racism has no place in our society," he said. Late on Wednesday night, it was announced he had resigned from the board and that his resignation had been accepted.
Also on Wednesday, Major League Baseball indefinitely suspended its Papa Slam promotion with the pizza chain, Yahoo Sports confirmed.

Ogilvy terminates creative chief Tham Khai Meng
In another high-profile departure, Ogilvy terminated the employment of its chief creative officer, Tham Khai Meng, after an investigation into his behavior following employee complaints. As Ad Age's Megan Graham reports, Ogilvy CEO John Seifert sent a memo to staff Wednesday stating that he had been informed of employee complaints two weeks prior and after investigations, concluded that Tham's "behavior was a clear breach of our company values and code of conduct." The company did not elaborate.
Ogilvy had named Tham its worldwide creative director and chairman of its worldwide creative council in 2008. It declined to comment further on the situation and Tham could not be reached for comment.
At the Cannes Lions International Festival of Creativity last month, Tham announced the agency planned to hire 20 senior women in creative positions globally by the end of 2020, and would partner with the 3% Movement to create and monitor benchmarks for employee satisfaction.

In its latest effort to focus on spam and fraudulent activity, Twitter announced that "locked" accounts will no longer appear in follower numbers, reports Ad Age's Garrett Sloane. Sloane explains that locked accounts are those Twitter has deemed suspect and then subsequently freezes from tweeting. Such accounts had appeared in follower counts giving an inflated impresion of the active audience for a given brand or creator. The move follows calls from the advertising industry, among others, to scrutinize accounts more closely. Keith Weed, CMO at Unilever, has been among the advertisers calling for platforms like Twitter and Facebook to count only authentic audiences and combat spam.

Just briefly:
Oprah's next food move: Oprah Winfrey is making a significant investment in True Food Kitchen and joining the board of the restaurant chain, which specializes in seasonal and healthy produce. However, as Ad Age's Jessica Wohl reports, while in some ways the idea sounds similar to the one Winfrey struck with Weight Watchers in 2015, so far there are no plans to showcase her in True Food Kitchen's marketing.

Over to you, Fox: Sky shareholders could be the big winners from the increasingly fierce battle between Comcast and 21st Century Fox to take control of the British pay-TV broadcaster. Comcast increased its takeover bid for Sky on Wednesday, Bloomberg News reports, and is now offering approximately $17 a share (14.75 pounds) for the broadcaster, valuing it at $34 billion. That compares with an approximately $16-a-share proposal (14 pounds) from Fox made earlier in the day, according to Bloomberg News.

Just for Kicks: Nissan has launched its first U.S, ad for the Kicks subcompact crossover and, reports Ad Age's E.J. Schultz, the automaker and agency TBWA Chiat/Day New York did not start with a script but went straight to the soundtrack. After listening to "literally hundreds of tracks," says Jeremy Tucker, VP of marketing communications and media at Nissan North America, it selected "Strange" by Louis and the Child to help it boost, the brand hopes, the ad's emotional impact.

Billboard's Amato resigns: John Amato, the CEO of The Hollywood Reporter-Billboard Media Group, has resigned. The New York Times reports that Amato had faced accusations of suppressing critical articles on former Republic Records Group President Charlie Walk, who was fired following accusations of sexual harassment. However, the group gave no explanation for his resignation.

RIP Nano: The world's cheapest car, the Nano, made in India by Tata Motors, is on its deathbed, Bloomberg News reports. The car was hailed as a "milestone in frugal engineering," but after 10 years, Bloomberg says, production numbers have dwindled, exports are zero (vs. a whopping 25 in June 2017) and the company acknowledges that the car in its "present form cannot continue beyond 2019."

Creativity pick of the day: Kids commiserate about their tough days over glasses of milk in a new campaign from the California Milk Processing Board, which has rebranded its 25-year-old "Got Milk?" campaign with new ads by Gallegos United, Ad Age's I-Hsien Sherwood writes. "I'm so slammed today," says one boy, as he leaves early to head to scouting and taekwondo. The new strategy, Sherwood says, reflects milk's place in the U.S.: It has to compete with all the alternatives, both within and outside of dairy. Gallegos won the entire account from Goodby Silverstein & Partners earlier this year after 12 years as its agency for Hispanic campaigns. Check out the work here.