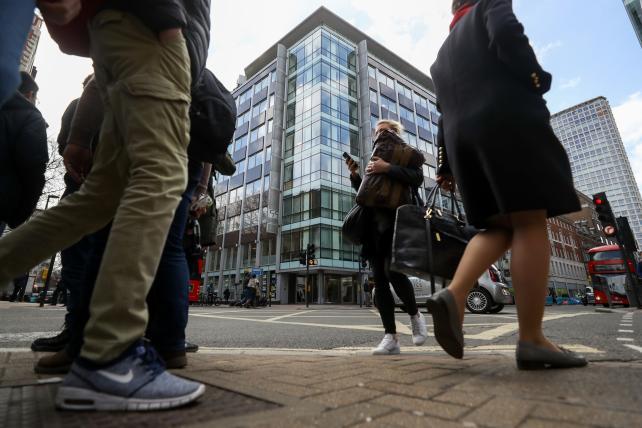 The building that houses the offices of Cambridge Analytica in London, U.K.
Credit: Simon Dawson/Bloomberg

What people are talking about today: Cambridge Analytica filed for bankruptcy on Wednesday, and speculation has begun that this could be a move to evade justice over its data-harvesting activities.

The political-consulting firm at the center of the Facebook data-collection and privacy scandal filed for insolvency in both the U.K. and U.S., saying it lost "virtually all" customers and suppliers as a result of reports that it improperly obtained information from tens of millions of Facebook users. However, there are concerns that Cambridge Analytica could emerge in a new form. As earlier reported by Business Insider, several involved in Cambridge Analytica, including executives from parent company SCL, have registered a new company named Emerdata. Rebekah and Jennifer Mercer, daughters of President Trump supporter Robert Mercer, joined Emerdata March 16.

We'll get to that in a minute, though, because also on stage was David Carroll, the associate professor at Parsons School of Design in New York who filed a lawsuit against Cambridge to find out what data the company has about him. "Data is anonymized," he said, "but it can be matched against other data to determine who the user is. Companies can't promise our data is safe, even when it is anonymized."

Summit highights included insights from Jano Cabrera, McDonald's senior VP of U.S. communications, global media and PR, who said that the comms team holds a daily morning meeting to take stock of social media and ask, "What does the data actually show us?" And never underestimate the power of an apology, he said, which McDonald's did quickly after the company's corporate Twitter account was hacked and a tweet called Trump a "disgusting excuse of a President." Read here for more of his tips.

Kelly Stepno, senior director and Washington, D.C., practice lead at Apco Worldwide, said when the opposite happens, and Trump tweets about your brand, don't respond, as engaging prolongs the negative attention. (In other words, it's a bit like arguing with a toddler.) Read here for more insights from Stepno and others.

Meanwhile, God-Is Rivera, director of inclusion and cultural resonance at VML, delivered a stark warning on diversity and inclusion, saying creatives have helped create a default narrative that revolves around Caucasian families. "Most brands that I work with are light years ahead of agencies in inclusion and diversity," Rivera said.

Hooking up with Van Pelt

In NewFront news, ESPN, among other moves, is rolling out a daily, digital version of its "SportsCenter" flagship on the newly revamped ESPN app hosted by Scott Van Pelt and a rotating cast of other anchors.

As Ad Age's Anthony Crupi reports, Van Pelt said viewers who fall asleep to his midnight TV show and wake up to the new digital program might feel like they're married to him or are "hooking up," then asked the audience to "decide which is the more horrifying thought."

China telecoms clampdown: The Trump administration is considering executive action to restrict the ability of some Chinese companies to sell telecommunications equipment in the U.S. based on national-security concerns, reports the Wall Street Journal. The affected firms would include Huawei and ZTE Corp, according to "several people familiar with the matter."

Tesla burns through cash, Musk upbeat: Elon Musk claims Tesla is on the verge of an upturn, reports The New York Times--even though the auto brand posted a loss for the sixth quarter in a row and burned through $745 million in cash. All it needs to do, he says, is meet its latest production goals for its Model 3.

Viral fashion: New York Magazine's The Cut has unveiled a line of T-shirts featuring viral headlines, writes Ad Age's Simon Dumenco. Best-sellers include, "What Do Jared And Ivanka Do All Day?"

Spotify stock plunge: Spotify shares fell by 9 percent after its first set of earnings was announced since it went public. The numbers are in line with analyst estimates, but according to the Financial Times, stock had climbed 14 percent over the past month, suggesting that investors were hoping for more.

Story time for Macy's: Macy's announced that it's acquiring Story, a New York City-based concept shop that features a rotating cast of brands. Ad Age's Adrianne Pasquarelli reports that Story founder Rachel Shechtman is joining Macy's as brand experience officer, and that a small Story shop-in-shop is expected to exist within Macy's locations.

Creativity Pick of the Day: In Romania, Burger King wants people to book flights but deliberately miss them in order to eat a Whopper. Why? Well, the country's only Burger King outlet is in Bucharest airport, beyond the security check. Publicis Romania created a website allowing customers to book super low-cost flights so they can go through security then turn their boarding passes in for a burger at the restaurant. Check out the video on Creativity Online.

CORRECTION: An earlier version of this stated that Michelle St. Jacques, head of brand and R&D at Kraft Heinz, advised brands not to respond if President Trump tweets about them.