In a saturated new-product world where hits are increasingly hard to come by , Procter & Gamble has managed a grand slam with Tide Pods.

The company is projecting $500 million in first-year retail sales for Pods -- a major feat, considering that of the 1,500 new consumer-packaged-goods launches tracked by SymphonyIRI in 2011, only 21% reached year-one sales of even $50 million. Moreover, because of product scarcity, P&G has not offered promotions on the premium-priced Pods, so discounting hasn't had a role in its success. 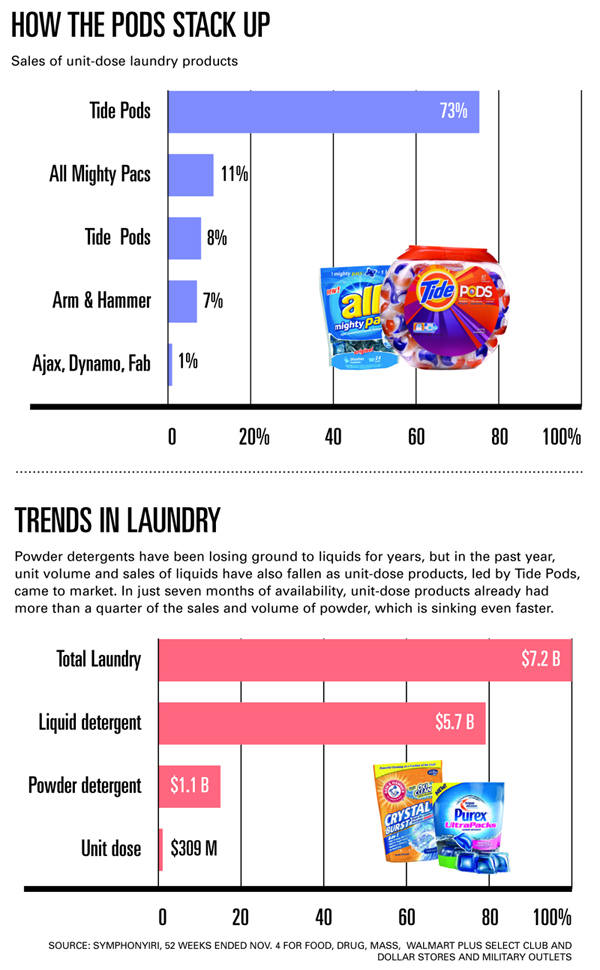 The milestone hasn't come easy. Billed as the biggest laundry innovation in a generation, Pods came to market in February, six months later than planned and without the originally scheduled retail promotions because of supply shortages. Supply problems still linger, in fact, which is why smaller bag packs remain on allocation and Pods remain excluded from coupons for other Tide products.

The product also drew scrutiny from Sen. Chuck Schumer, D.-N.Y., over reports of kids accidentally eating them, which the Centers for Disease Control and Prevention found happened nearly 500 times in May and June. And in September, Sun Products, marketer of All Mighty Pacs, sued P&G for patent infringement.

Despite it all, with $226 million in sales through Nov. 4, according to SymphonyIRI, Pods have earned a 73% share of the $309 million unit-dose segment year-to-date in outlets including Walmart and some club and dollar stores. Offerings from All, Henkel's Purex, Church & Dwight Co.'s Arm & Hammer and Phoenix Brands' Fab, Ajax and Dynamo have a combined $83 million in sales.

Tide's share in the segment is more than double its 36 % share of liquid detergent or 29% in powder, so the launch and production delays that allowed competitors to come to market simultaneously haven't prevented Pods from winning handily.

Sales in the broader $7.2 billion laundry-detergent category were down 0.2% for the 52 weeks ended Nov. 4. But Tide sales, which had been flat to down since the 2007 recession, were up 9% thanks to Pods.

Interestingly, P&G VP-North American Fabric Care Alex Keith told an analyst conference Nov. 15 that much of Pods' volume comes from value brands, even though it's the most-expensive product in laundry. In part that 's because Pods marketing has redefined "value" to mean efficiency more than price. Its ads, from Saatchi & Saatchi, Digitas and Starcom Mediavest Group, have focused on how much more concentrated cleaning power Pods provide compared with value brands.

So who are Tide's pod people? There is some evidence that the brand is particularly popular on college campuses and among apartment dwellers, and people who have their washers in the basement (about 22 % of the U.S. population).

Just how well Pods or unit-dose products broadly are really doing, however, depends upon whom you ask. Church & Dwight Co. Chairman-CEO James Craigie suggested on a Nov. 5 earnings conference call that unit-dose products may actually hurt the category. One reason, he said: "People tend to overdose liquid, and you can't overdose unit dose."

Some other industry executives said that while unit-dose products have reached 7% of laundry sales, retailers were hoping for 15% by now, and that remains well short of the 30% P&G has ultimately projected for the segment.