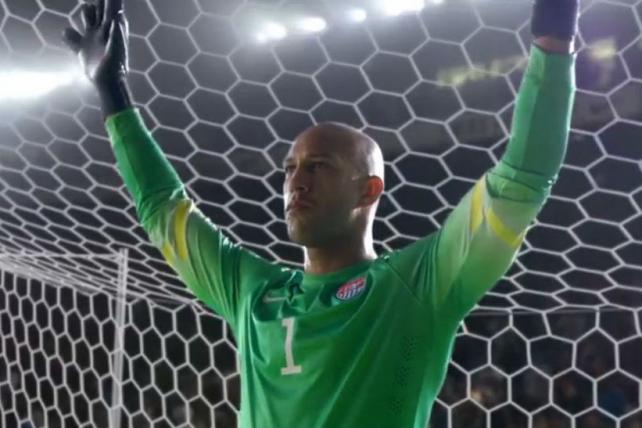 With every perfect punchout, every last-second dive, American goalie Tim Howard was busy writing himself into American sports lore Tuesday.

He was also pushing himself to the top of American marketers' agendas.

"I don't think there's any doubt he could earn a few million dollars in the next couple months," said Jim Andrews, a senior VP at IEG, a sponsorship consultancy. A nice addition to a net worth of $8 million, according to website celebritynetworth.com

But don't expect him to get carried away. "We're gonna have to be judicious about the opportunities coming his way," said Mr. Howard's agent, Dan Segal.

Tuesday's match between the U.S. and Belgium was the highest-rated soccer match in the history of U.S. cable TV, and for most of the match's 120 minutes, Mr. Howard was essentially a star under siege. According to statistics compiled by FIFA, the Belgian team blasted 27 shots on the U.S. goal (compared to 9 shots on goal for the American side), and Mr. Howard turned back 16 of them, the most saves ever recorded in a single World Cup match.

By the end of regulation, fans across the world were sharing their awe at Mr. Howard's performance. He was mentioned more than 1.8 million times on Twitter over the course of the match, and #ThingsTimHowardCanSave began trending on Twitter.

At the end of the match, which the U.S. lost, Mr. Howard was named Man of the Match, and even opposing players took to Twitter to congratulate him on his performance.

And he was briefly named Secretary of Defense on Wikipedia.

The surge of attention has opened a narrow window of opportunity for Mr. Howard to cash in on a flood of endorsement opportunities. "He's gonna attract a lot of interest from a lot of different companies," Mr. Andrews said.

The range of opportunities could be vast, but at the top end, Mr. Andrews said that any national TV campaign Mr. Howard signs could be a seven-figure deal. Single appearances could net him "easily six figures."

For most American athletes, this would normally be the perfect time of year to make a huge splash. With only one of the four major American sports in session, the window for Mr. Howard to pile up as many endorsements as possible is wide open.

"If he wanted, he could probably have space until the NFL season starts in September," Mr. Andrews explained.

But because Mr. Howard plays for Everton, a soccer club in the English Premier League, his window is actually much tighter than that since he starts training again in a matter of weeks, according to Mr. Segal.

Howard is not new to pitching. According to Mr. Segal, Mr. Howard has appeared in campaigns run by Nike, McDonald's, Allstate, Gatorade and Mastercard -- including Nike's epic "Winner Stays" video from earlier this year in which the Incredible Hulk turns into Mr. Howard.

He was also a player in Nike's "Risk Everything" effort.

Those are relationships Mr. Howard will want to preserve. "He's not going to get carried away trying to do every media opportunity he can get," Mr. Segal said.

But no matter how much of a windfall Mr. Howard earns from his heroic performance against Belgium, Mr. Segal expects that it won't be the last.

"He's a very charismatic guy who does very well in the spotlight," Mr. Segal said.