Why Do Boys and Girls Have Similar Interests, But Very Different Toys? | Ad Age
Skip to main content
Sign In Register

Why Do Boys and Girls Have Similar Interests, But Very Different Toys?

Is it possible that boys will at some point demand Littlest Pet Shop sets and girls will ask their parents for K'nex?

Highly unlikely, despite the fact that boys and girls have increasing similarities. The biggest gap is in traditional toys and which genders play with them, and toy makers around the world seem to be woefully behind the curve when it comes to developing traditional toys that appeal to both genders. A new study by agency the Marketing Store Worldwide called "The New Definition of Childhood" global kids study -- which surveyed more the 4,000 kids with internet access ages six to 12 in 12 countries, including, Canada, U.K., France, Germany, Spain, Poland, Brazil, Mexico, Japan, China, Australia -- suggests that while the gender gap is closing in several areas for kids, the chasm is still wide for toys.

The study found that boys and girls generally do the same things -- for instance, their usage of electronics is very similar. Both genders embrace technology the same amount, but boys tend to be more into gaming, while music appeals more to girls. The study noted, though, that the gaming gap for kids is closing, as video game developers -- such as the Nintendo Wii -- offer more girl-friendly titles. Boys and girls are also similar in their activities. Roughly the same amount of boys and girls engage in activities such as gardening, camping, cooking and other outdoor activities.

But the disparity in the types of traditional toys kids play with is vast. Girls are still by far more likely to have dolls and stuffed animals; roughly 55% of girls surveyed said dolls were in their top three favorite toys, whereas some 2% of boys said the same thing. Boys are still more likely to have construction toys, as close to 40% of boys surveyed said building and construction toys were among their favorites, where just over 10% of girls said the same. "These gaps are enormous," said Renee Weber, VP-consumer strategy and research at the Marketing Store Worldwide.

These differences in traditional toys are also very consistent around the world, Ms. Weber said, adding that Mexico had some of the biggest gaps in almost every toy line. "For whatever reason, [Mexico] was more gendered." 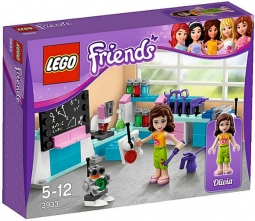 But why are there still such huge gaps in toys globally? "There's been very little evolution to modify toys to make them interesting to the opposite gender," said Ms. Weber. She said that "there's not a big look at natural play patterns," and that making a toy pink, for instance, isn't going to necessarily generate more interest from girls, because that doesn't "speak to the issue of how genders play differently."

"When you're talking about a product like a toy, where there's not a built-in liking or appeal for both genders, you need to change the product to drive that appeal, and changing it is not just about color or naming [it differently]," said Robert Pieper, senior VP-strategy and planning at the Marketing Store.

One marketer that garnered attention for trying to bridge the gap by rolling out a girls line of toys is Lego, which late last year unveiled its line of Lego Friends aimed at girls. Critics of the toys, which featured curvy figurines dubbed "Ladyfigs" and assemble-yourself construction play sets in purple and pink such as beauty shops, said that the toys reinforced gender stereotypes and encouraged girls to focus on their looks. Critics also said that the company should include more girls in its advertising, rather than develop a line of separate toys.

Mr. Pieper said that in the company's defense, Lego tried things many toy marketers have not yet. "Lego took construction play and ... merged it with girls' play patterns," adding that it was "highly successful."

Indeed, it was. The company on Aug. 31 said that the new line of products sold twice as many units as expected during the first six months of the year and helped boost sales.