Tuesday Wake-Up Call: An unusual ad from the Trump campaign, and defiance at Google | Ad Age
Skip to main content

Tuesday Wake-Up Call: An unusual ad from the Trump campaign, and defiance at Google 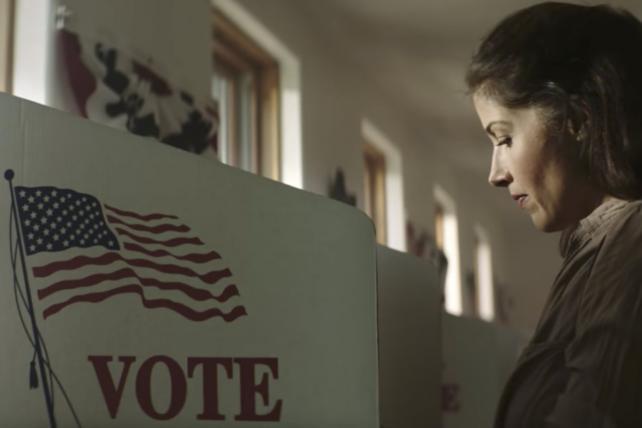 From the Trump campaign's ad for the midterms
Credit: Donald J. Trump for President/YouTube

What people are talking about today: President Trump's campaign committee is spending $6 million on a new ad to promote Republicans in the midterm elections, though Trump himself doesn't appear in it. The spot focuses instead on a fictional mother who wants the economy to stay strong as her daughter grows up. What's the deal? Trump's 2020 re-election campaign manager, Brad Parscale, told CBS: "The president's not on the ballot. This is about his agenda." The New York Times has a different explanation for the ad's utter lack of Trump:

"Mr. Trump is unpopular with the group of voters his campaign is apparently trying to target at this critical stage in the race: white, college-educated women, who recent polls have shown disproportionately view him negatively, and are also disinclined to vote for Republicans."

The spot makes the case that the economy has been strong under Trump, opening up new opportunities for people and their children ("Things are getting better! We can't go back.") There is a curious cameo in the minute-long ad: CNN, the frequent target of Trump's ire. The Republican-voting mom in the ad has CNN playing on TV. As The Times notes, the news footage has been edited slightly for the Trump campaign's purposes: The CNN logo that usually appears on the screen during newscasts "is whited out and blank."

All bets are on
The NHL is the latest pro league to strike a sports gambling deal with MGM Resorts after the Supreme Court ruling that cleared individual states to legalize gambling. The NBA and WNBA made a similar move a few months back. As Ad Age's Anthony Crupi writes,

"Like it or not, legalized gambling is about to become an integral part of the fabric of American sports, and any league that tries to ignore the cultural shift likely does so at its own peril."

The National Hockey League's deal gives MGM proprietary data for use in wagering. The big question mark here: Will hockey betting be a thing, given that there's so much more action around football and basketball? As Crupi writes, "even the most degenerate gamblers will tell you that betting on hockey is often a last resort, something that action junkies lean on when there's nothing else to wager on."

Defiance
Some employees at Google are unhappy about how the company has handled allegations of sexual misconduct against executives. And they're reportedly planning a walkout. Bloomberg News reports that it might happen Thursday; BuzzFeed News, which was the first to report on the brewing protest, says over 200 engineers plan to take part. The move is apparently a reaction to a New York Times report that Google gave Android boss Andy Rubin a $90 million exit package in 2014, despite a complaint from another employee who said she had been coerced into giving Rubin oral sex in a hotel. (Rubin tweeted that the allegations were false and "part of a smear campaign" related to his divorce and custody battle.)
Quote: An anonymous Google employee told BuzzFeed: "Personally, I'm furious. I feel like there's a pattern of powerful men getting away with awful behavior towards women at Google …"

Just briefly:
What to watch for today: Facebook reports earnings for what Bloomberg News describes as "a quarter of turmoil that included executive departures, a huge privacy breach, threats of regulation and struggles to contain misinformation ahead of key elections in the U.S." And Apple is having an event where it's expected to announce at least one new iPad Pro, as CNBC says.

Pay up: The UK says it "will impose a digital services tax on the domestic revenue of the 'established tech giants,' most likely targeting companies like Facebook, Google, and Amazon," Quartz writes.

Gone: "A Campbell Soup Company executive who had planned to retire next month left last week instead after sharing a conspiracy theory on Twitter about a migrant caravan in Mexico," The New York Times reports. Kelly Johnston had been the company's VP-government affairs.

An update: A New York street mural depicting Time magazine's cover on gun violence got a "heartbreaking update," as Ad Age's Simon Dumenco writes. The mural by French artist JR was tagged in red paint with the number 11, honoring those killed in the Pittsburg synagogue shooting this weekend.

Flat: MDC Partners, whose agencies include Crispin Porter + Bogusky, 72andSunny and Anomaly, says third-quarter revenue was flat year-on-year. The company is also looking for a new chairman and CEO, and it's pondering its future. Read more by Megan Graham in Ad Age.

Win of the day: After a review, sportswear brand Puma picked Havas Media to be its new global media agency for buying and planning, Megan Graham writes. Publicis Media-owned Blue 449 is the incumbent.

LiveRamp: Ad Age's George Slefo has answers for your questions about LiveRamp, the self-described "leading provider of omnichannel identity resolution." (Huh?) It's in the news, and it just reported quarterly revenue up 20 percent year-on-year.

Quote of the day: "A lot of the noise about in-house agencies is that: Noise," marketing consultant Avi Dan tells Ad Age's Brian Braiker. "There's certain work that doesn't make sense to push outside and give to agencies. But I haven't seen one brand-building campaign that came from an in-house agency."

Creativity pick of the day: Just in time for Halloween, The New Yorker's cover depicts President Trump as a trick-or-treater lugging around well-stuffed jack-o'-lantern candy buckets – and meanwhile, scaring the neighborhood ghosts and demons away. Read about it from Ad Age's Simon Dumenco, and check out Mark Ulriksen's illustration, here.