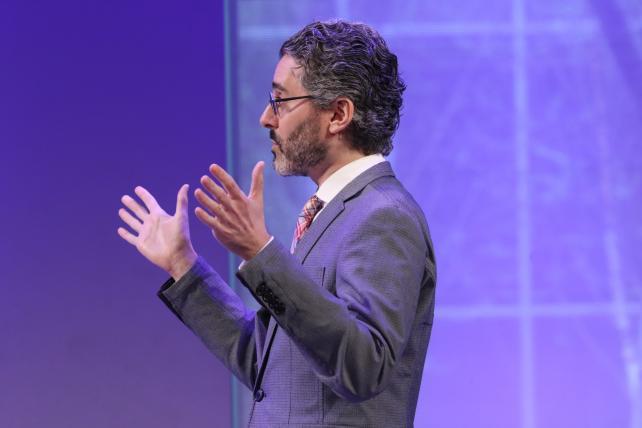 Welcome to Ad Age's Wake-Up Call, our daily roundup of advertising, marketing, media and digital news. What people are talking about today: New York Times TV? After its successful foray into podcasts, The New York Times is setting its sights on living room screens. Mark Thompson, president and CEO of The New York Times, hinted at the company's NewFront presentation that the NYT could bring some of its most popular pieces of content and sections to living room screens, Ad Age's Jeanine Poggi reports.

While no actual projects have been announced so far, programming could include a TV show around the people the NYT featured in its series "Overlooked," about women and minorities who didn't get obituaries in the Times but should have, and a TV-version of "The Daily" podcast. Crossword puzzles might even make it to a TV show. Separately, The Times is beefing up its business coverage and will rename its business section later this year to better reflect how technology has changed the world and work life.

Consider this plain news or the warning shot it was to older attendees furtively Googling names. As questions continue about whether influencers will retain their value, Viacom trotted out a veritable Who's Who of young influencers and creators, Ad Age's Anthony Crupi reports, with the company's pitch awash with digital natives like JoJo Siwa, Arturo Castro and Liza Koshy. Among the programs Viacom has in the pipeline is "Road to VidCon," a multipart series that follows a young creator's journey to the annual conference devoted to all things YouTube.

Of course, writes Crupi, "Viacom's entire raison d'être boils down to street cred, which is a somewhat outdated way of saying that the company lives or dies on its ability to scout and sign digital natives like Liza Koshy, whose primary YouTube channel boasts 14.3 million subscribers.

WPP, which reported slightly better than expected results on Monday, with like-for-like sales down 0.1 percent, still won't shed light on why founder and former CEO Martin Sorrell resigned. As Ad Age's Megan Graham reports, in a London investor meeting WPP Executive Chairman Roberto Quarta only kind of addressed Sorrell's departure. "Martin resigned. Martin was not terminated. This came about at the end of the investigation when the results of the investigation were known," he said.

In the call later Monday, Quarta spoke about the company's search for a new CEO and said the company is trying to conclude the process as quickly as possible, but that "it must be done both thoroughly and properly." He also addressed speculation about a breakup, saying the company will be keeping an "open mind" and doing what it thought would create most value for shareholders. Sure, go back to sleep. We might.

Jan Koum, a founder of the messaging app WhatsApp who sold the service to Facebook in 2014 and is on its board of directors, is leaving the social network platform, according to The New York Times. Koum did not give a reason for his exit, but The Times reports that according to a company executive, Koum had grown increasingly concerned about Facebook's position on user data. The story points out that Koum wrote in a blog post after selling WhatsApp in 2014: "Respect for your privacy is coded into our DNA, and we built WhatsApp around the goal of knowing as little about you as possible."

And it ups its content partnerships: Meanwhile, Twitter showed off more partnerships with publishers and networks at its annual pitch to digital ad buyers. The social platform described deals with ESPN, Viacom, NBC Universal, Hearst, Major League Baseball and others in a bid to boost its ad business, Ad Age's Garret Sloane reports.

In the money: Shortly after announcing its mega-merger with Walmart-owned Asda, Mike Coupe, the CEO of U.K. supermarket Sainsbury's was caught on camera singing "We're in the Money" from "42nd Street" as he waited for a TV interview. As The Guardian reports, Sainsbury's fiercely denied that it was anything to do with the $70 billion deal.

iPhone sales concerns: Apple will report its quarterly earnings today and analysts are looking to see if the iPhone X lived up to the hype.The company is expected to report fiscal second-quarter iPhone unit sales grew just over 2 percent from a year earlier, reports Bloomberg.

McDonald's hypes value: McDonald's sales grew more than expected, but the number of people visiting its U.S. restaurants fell in the first quarter, reports Ad Age's Jessica Wohl. So the company is now emphasizing its value marketing including on certain breakfast sandwiches as competition heats up in the morning, and on specific items on its Dollar Menu.

Amazon's silent meetings: Jeff Bezos revealed at an on-stage interview in Dallas yesterday that the company's meetings start with those in attendance silently reading a memo. As the London Times also reports, no PowerPoints are used inside Amazon and when new executives join they're told, "This is the weirdest meeting culture you ever encounter."

Creativity Pick of the Day: In a campaign to promote its juicers, Philips hijacked Amsterdam's famous Rijksmuseum, erasing fruit and vegetables from Dutch Master still life paintings. Visitors saw versions of the paintings with fruit removed and also witnessed a museum attendant apparently removing an apple from a painting and putting it into a juicer. Their reactions were filmed for a social stunt by Ogilvy Amsterdam. Take a look here. The premise behind the campaign is that people don't eat enough fruit and vegetables and tend to ignore them in still life paintings, but they miss them when they're not there.