Commentary: Republicans and the Media Invited Trump In. Now What?
READ THIS NEXT
Watch the viral 10-second Biden campaign ad that Trump graciously made for him 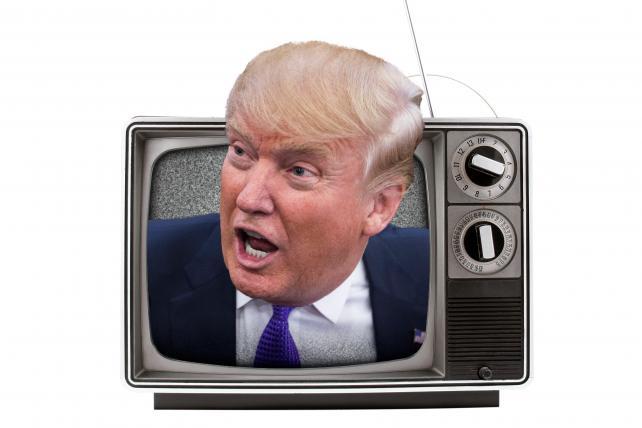 Other than the fact that Dracula is tremendously well-groomed for a guy who can't see himself in a mirror, the weirdest paradox of vampirism holds that a bloodsucker can only enter your home if he's invited. Remind you of anyone?

In courting the fringe over the past 15 years, the Republican Party effectively sent Donald J. Trump a formal invitation. Trump has now scrawled a few monosyllabic insults ("Sad!" "Dumb!") on the creamy, heavy-stock RSVP card and let himself in, immediately draining the lifeblood of the establishment.

In keeping with the somewhat tortured metaphor -- the essential Trumpiness of Donald Trump all but demands a certain rhetorical self-indulgence -- the GOP now faces the task of plunging a stake through the heart of its presumptive nominee. Mitt Romney gave it a whack last Thursday, delivering a speech in which he characterized the front-runner as a "phony" and a "fraud" whose ultimate legacy as president would be wholesale ruination. But the media, too, now finds itself anxiously fiddling with the garlic.

CBS Corp. President-CEO Les Moonves last week told the Morgan Stanley Technology, Media & Telecom Conference that the high drama and low high jinks of the GOP race has been a boon to the TV business. "You know, it may not be good for America, but it's damn good for CBS. That's all I have to say," Moonves said. "The money's rolling in and this is fun. It's amazing."

While Moonves chuckled, his remarks also conveyed ambivalence. That may have been informed by his political leanings (Moonves is an inveterate Democrat), but there was also a suggestion that the candidates aren't exactly attending to the "better angels of our nature," as Lincoln once said. "I mean, they're not even talking about issues," Moonves said. "They're throwing bombs at each other, and I think the advertising reflects that."

Advertising so far is actually of secondary importance to the Trump campaign, which has been gifted with a staggering load of free media. According to TV news trainspotter Andrew Tyndall, the Donald has accounted for nearly one-third (327 minutes) of all the election 2016 coverage on the Big Three networks' evening news, while Hillary Clinton is a distant second (121 minutes), and Marco Rubio (22 minutes) and Ted Cruz (21 minutes) are almost afterthoughts. Ad spend levels are predictably inverted: Team Trump has invested a negligible $12 million since April 2015, while Clinton's campaign and supporting groups have ponied up $41 million. Jeb Bush and his allies somehow thought it prudent to spend $80 million on advertising, which works out to $20 million for each of the four delegates he picked up. (Sad!)

If the Trump campaign isn't buying much advertising yet, it's still helping networks sell ads to everyone else. The average delivery for the first 10 GOP debates was 15.8 million viewers, a 10th of a point better than what TV's top comedy, "The Big Bang Theory," draws each week. That's nearly double the turnout for the half-dozen Democratic debates; with an average draw of 8.53 million viewers, the Clinton-Sanders jousts have reached the combined audience of HBO's "Game of Thrones," "Vinyl" and "Veep."

The promise of a series of autumn Trump-Clinton debates has network bosses tenting their fingertips à la Mr. Burns. Despite the fragmented TV audience, such a showdown conceivably could outdraw the record 80.6 million Americans who tuned in for the Reagan-Carter salvo in October 1980.

For all that, the media finds itself in much the same pickle that traditional Republicans are now in. The bellicose GOP front-runner may be good for business, but at what cost? When reporters are ejected from Trump rallies for posing questions, when photographers are throttled and slammed to the floor by the Secret Service, when the front-runner roundly dismisses members of the press as "scum" and "bimbos" to the cheers of thousands, the shadow of the vampire is cast over the First Amendment. The stakes, in both senses of the word, are high. Donald Trump sucks.