The spending hike comes as Unilever beat analyst forecasts with full-year organic sales growth, excluding impact of acquisitions, divestitures and currency fluctuation, of 6.8% to $68 billion and net profit growth of 7% to $6.6 billion. For the fourth quarter, organic sales rose an even faster 7.8%, led by personal care at 11.5%.

Unilever's digital ad spending rose nearly 40%, said Chief Financial Officer Jean-Marc Huet, who in an investor presentation noted the company's Digital A-List honor from Advertising Age and that he was part of Unilever's contingent at CES in Las Vegas earlier this month. He said Unilever had put 2,000 marketers through digital training and opened media labs in all eight regional clusters.

But Unilever's ad agencies may not have cause for celebration.

Mr. Huet said Unilever, like last year, still wants to reduce "non-working" media, i.e. "the part of the advertising spend which is used to make films, pay agencies and the like." He said Unilever is "still some way from benchmark levels" on such compensation, "and we aim to do better." 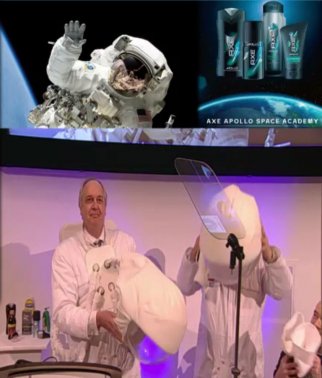 Mr. Huet and CEO Paul Polman both arrived at Unilever's investor conference wearing space suits in honor of the Axe campaign to send 22 global contestants into space in 2014, which is linked to a sweepstakes to be highlighted in the brand's Feb. 3 Super Bowl ad.

Unilever's sales trajectory sent the stock to record levels on Wednesday, up 2.5% to just above $40 in early trading on the New York Stock Exchange. But Mr. Polman also said the ride could get bumpier this year, thanks to fiscal austerity measures in Western Europe, fiscal uncertainties in the U.S. and slowing growth in Brazil and India, though he acknowledged a similarly gloomy global outlook a year ago.

Mr. Polman also said it will be hard to maintain the double-digit growth Unilever had in personal care and home care last year, particularly as unnamed rivals, such as P&G, look to regain lost share. But he said he expects the North American economy to grow 2%, noting "some signs that the U.S. is slightly picking up, and we should be slightly above that with our innovation program."