A Lot of Branding but Not Much Understanding

University of Phoenix Spends $100 Million Annually on Advertising, but Misconceptions Linger About the School
READ THIS NEXT
Celebrating AAPI creative excellence
Photo: Brian Garfinkel
SPORTING: Phoenix has naming rights to an NFL stadium, but no team.

NEW YORK (AdAge.com) -- In the barrage of back-to-school ads, get ready to see a lot for the University of Phoenix. The school heaps more than $100 million a year into measured media alone and is a highly efficient marketing machine that spends more each year than Cheerios or Tide.

In a field where most old-line universities spend a few million a year at best, the University of Phoenix is an anomaly for its approach to both education and marketing. It's the country's largest private university, with more than 400,000 students and 230 campus and learning-center locations. Its parent, Apollo Group, posted more than $3.1 billion in revenue during fiscal 2008 (Phoenix represents about 95% of Apollo's net revenue).

Because of the size of its student body, the university is the largest recipient among about 6,200 schools that receive federal funding for higher education in the U.S. With some 82% of its revenue derived from Title IV federally funded student-loan programs in its last fiscal year under the Higher Education Act, what it can afford to spend on marketing towers over most other schools.

That spending in turn draws more students, which yields more marketing dollars. Last year, Phoenix spent $134 million on measured media, according to TNS Media Intelligence, up 3.3% from 2007, and it's on track to top that in 2009 -- it spent $75 million in first half of the year. For five years running, the brand has ranked among Ad Age's Top 200 Megabrands. This year Phoenix ranked No. 128, behind just one school, ITT, but above more well-known brands such as Quaker, Purina, FedEx and Revlon.)

Moreover, in 2006 it signed a $154 million contract for 20-year naming rights for the NFL stadium near its Phoenix headquarters -- even though it has no sports team.

Party of one
But even with all that marketing firepower, many branding experts still don't know what the University of Phoenix really is. "We are in a category unto ourselves," said Michael Sullivan, senior VP-media services and marketing at Apollo.

So just what is the University of Phoenix? Since its inception in 1976, the school has catered specifically to working adults, a niche underleveraged by traditional colleges and universities. Citing data from the National Center for Education Statistics, Mr. Sullivan said only 27% of undergraduates are "traditional" students -- those who live on campus and go to school full time. For the remaining majority, "University of Phoenix provides a quality alternative that is more accessible than conventional four-year colleges and universities," he said. The average age of a Phoenix student is 34; most work full-time and/or raise a family while attending school.

Phoenix offers affordable tuition, flexible class scheduling and, since 1989, online classes -- embracing a form of distance education few traditional universities have felt, at least until recently, is on par with face-to-face learning.

"Phoenix entered the higher-education landscape with a radically different approach, one that offered limitless flexibility and convenience. They developed a large and loyal following before other colleges and universities even realized what was going on," said Elizabeth Scarborough, CEO of SimpsonScarborough, a higher-education-marketing consulting firm. "They're filling a gap that really was not filled before."

It's a lucrative gap. In Securities and Exchange Commission filings, Apollo reported that revenue increased to $2.9 billion in the first nine months of fiscal 2009, up 25.5% from the same period in 2008. This jump in revenue came largely from increased enrollment and select tuition increases. Since Nov. 30, 2005, degree enrollment has grown 56% to 420,700, according to Phoenix's 2008 annual report.

Fully-accredited
Phoenix's clear, practical and goal-oriented mission may be why traditional academia historically has cast it aside, treating it with disdain. "New is sometimes different," said Karen Solomon, associate director-accreditation at the Higher Learning Commission of the North Central Association of Colleges and Schools, the regional body charged with accrediting Phoenix. "It's hard for people to understand when they don't have a framework of experience in that."

Since 1978, Phoenix has been accredited by the commission, the same body that accredits Northwestern University, the University of Michigan and the University of Arizona. "People can focus on the for-profit status in a negative way," said Brian Mueller, former president of Apollo and CEO of Grand Canyon University, a private, for-profit Christian university. "But without question, on the positive side is the fact that these institutions are serving larger and larger numbers of students at affordable levels."

The school declined to talk about its marketing dollars or the allocation behind its ubiquitous "I am a Phoenix" ad campaign. Initiative is Phoenix's local media agency; Carat is its national one. The school turned to startup Pereira & O'Dell for creative duties last December after a six-month review. Pereira & O'Dell did not comment for this article. Apollo also has an in-house agency, Aptimus, bought for $48 million in 2007 and based in San Francisco.

One agency executive who participated in the school's account pitch last year said part of Phoenix's perception problem was endemic to the success it has met with internet advertising. "If the majority of your focus is put on direct response and driving traffic to an enrollment form, you don't have any emotional feeling as to what the University of Phoenix is," he said. "And that's why they feel more like an HMO or an insurance company than an institution that can improve your life."

Average grad rates
It's difficult to gauge the quality of a Phoenix degree, particularly when it comes to job-placement track records, as so many enrolled students are already employed full-time. "To really get at that you'd have to do a national survey of employers or recruiters," Ms. Scarborough said. "And I've never seen that kind of data." What's more, statistics from the Department of Education mischaracterize the school's graduation rate (they measure the graduation rates of only those who are first-time students; almost 94% of Phoenix's "working learners" do not fall into that category).

But Phoenix's in-house calculations, shared publicly for the first time last year in a self-published Academic Annual Report, are not comparable to any other data. Case in point: According to the Department of Education, Phoenix's online campus had a 4% graduation rate for undergraduates; in its own academic report, Phoenix listed completion rates of 27% for associate degrees, 38% for bachelor's degrees and 60% for graduate degrees -- comparable to national averages.

Phoenix has fought criticism in court as well. According to the company's most recent quarterly SEC filings, among the pending litigation is a lawsuit accusing the school of improperly compensating its enrollment counselors and submitting knowingly false records to get money from the federal government. And in a 2003 program review, the Department of Education found Phoenix had violated Title IV incentive-compensation regulations and later settled out of court for a $9.8 million fine, although Phoenix never admitted any wrongdoing and continues to call the report "flawed and dated."

Phoenix does not have a standalone advertising program, though it does offer degrees in communications and marketing. Few agencies contacted for this article said they had seen Phoenix r?sum?s come across their desks. "In the past three months, we have received around 750 r?sum?s, and we can remember seeing only one from the University of Phoenix," said Robin Lander, director of human resources at Deutsch.

But John Challenger, CEO of outplacement firm Challenger, Gray & Christmas, said in many ways, traditional and online education programs are merging, and we are in the midst of a major shift in how education is delivered in the U.S. That is particularly true given President Barack Obama's wish to extend higher education to more Americans.

The difference between online and traditional education already has been minimized in the corporate world. Procter & Gamble, Unilever and Google are among the many companies that offer tuition reimbursement to employees taking classes at Phoenix. The University of Pennsylvanias of the world are offering more and more online classes, and even General Electric alum "Neutron" Jack Welch now has an online M.B.A. program.

As Phoenix's size continues to grow -- and, at the same time, more public and private nonprofit colleges and universities embrace the online world and come to understand the value of marketing -- it may just be on its way toward acceptance, or at least understanding.

Here are the top six measured-media spenders (excluding the University of Phoenix, which ranks No. 2) in the for-profit-education category, according to TNS Media Intelligence. 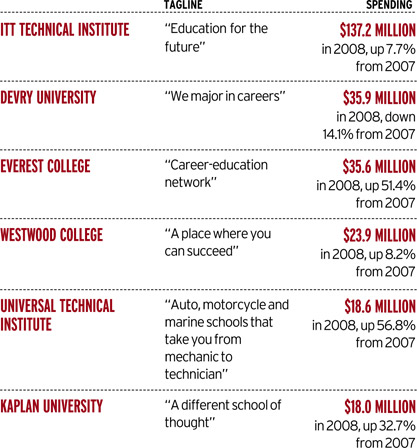 Marissa Miley
View all articles by this author