What's Love Got to Do With It? A Lot, but Not as Much as the Day of the Week | Ad Age
Skip to main content
Sign In Register

What's Love Got to Do With It? A Lot, but Not as Much as the Day of the Week

Valentine's Spending Expected to Get a Lift as Consumers Spring for Cards, Chocolate, Flowers ... and Dating Sites
READ THIS NEXT
Peloton agrees to a costly recall, and Trump's Facebook account is in limbo: Thursday Wake-Up Call

YORK, Pa. (AdAge.com) -- What is love worth? More than ever this year.

Consumers in the U.S. spend billions on chocolates, flowers, greeting cards, jewelry and dining out every year spiking annually in February. Sales in those collective categories are projected to grow from 6% to 11%, depending on researcher estimates. 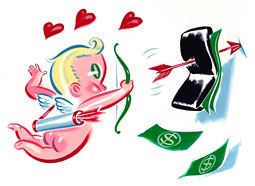 That means Valentine's Day this year will ring up from $15.7 billion to $18.6 billion in sales, with the average person spending from $110 to $125. (Men will spend more than women, on average, about $159 vs. $76, according to a Big Research study conducted for the National Retail Federation.)

"We're coming out of the recession, so Valentine's spending is reflecting that and getting back to where it was," said Phil Rist, Big Research exec VP-strategy.

Valentine's Day sales will also get a lift this year simply by the day of the week it falls on. A Valentine Sunday such as last year tends to lower sales with fewer exchanges happening at school, the lack of overnight shipping for flowers or gifts, and last-minute gift runs are "too noticeable" by loved ones in the household, industry watchers said.

Susan Whiteside, VP-communications for the National Confectioners Association, estimates almost $1 billion ($937 million) will be spent on chocolates and candy this year. Valentine's is the No. 4 candy-giving holiday behind Halloween (more than $2 billion), Easter ($2 billion) and Christmas ($1.5 billion), she said.

While heart-shaped boxes of chocolate are a traditional staple of the holiday, Ms. Whiteside said the growing trend in chocolates are nontraditional gifts such as gourmet bars and single-serve individually wrapped chocolates. About 75% of the NCA's candy estimate for Valentine's is spent on chocolate. "Customization and specialization are part of it, but it's really this overall concept of thinking outside the box, or in this case, outside the heart-shaped box," she said.

Flowers are another traditional Valentine's gift, and 1-800-Flowers, whose floral sales were negatively affected by the Sunday Valentine as well as severe snow storms across the country, will likely see a much rosier day this year.

Retail analyst Nikoleta Panteva, at IBISWorld, said 1-800-Flowers' expansion into gift baskets, the Monday date, and customers who order last-minute online, positions the company, and the flower industry overall, as the largest category growth this year.

1-800-Flowers is doing its part too, by marketing online early bird promotions and several strategic partnerships, including one with ESPN Radio personalities. Every day through Feb. 12, ESPN's top personalities will give advice on sports and love, with fans able to vote for the best advice and enter a sweepstakes to win a "guys weekend" at Walt Disney World, said 1-800-Flowers President Chris McCann. The company's in-house agency worked with Newmark Advertising on the campaign.

"Valentine's is still considered by most as an occasion where gifters look to wow that special someone and not settle for less," he said.

Contrary to conventional thinking, the proliferation of e-greetings, where American Greeting has a strong presence, has not diminished the paper card business. Valentine's is American Greetings No. 2 holiday behind Christmas.

"Consumers tell us about the special-ness of cards. There is a lot of investment of time and effort and emotion in going out and choosing a card and putting it in the mail," said Kelly Ricker, executive director of product development at American Greetings. "Even though there is a lot more communication today, a lot of it is generic, and that has carved out a place for greeting cards as authentic and traditional, in a good way."

But for all the billions that researchers estimate will be spent on Valentine's-related products, they didn't take into account some other love-connected industries like weddings and online dating. Online dating and matchmaking is a $2 billion business, according to IBISWorld. Online dating site Match.com, in fact, does see a spike in interest around this time of year.

"This is my favorite time of the year," said Mandy Ginsberg, exec VP-general manager of Match.com. "Right after Christmas we start to see an increase and we get a jump of about 20% to 30% [compared to average rates] by the beginning of the year. ... The biggest surge is leading up to Valentine's Day."

Match.com is in the midst of a TV-based marketing campaign, handled in-house, that began last spring that features moments from real dates. The company shot 20 dates from matches it made and has rough-cut about 100 spots, making it easy to change out the creative. The message centers not on finding everlasting love, but more simply on new beginnings with a new year.

"Valentine's Day can be a touchy subject. We want them to be excited about finding someone, but we don't want to remind them they're alone for Valentine's Day," Ms. Ginsberg said.

But while Valentine's is a particularly busy time for the business of love, those marketers would also likely agree with 1-800-Flowers.com's Mr. McCann that it's only part of the picture. "Whether it is Valentine's, a romantic love's birthday, anniversary or whether our consumers are just sharing the sentiment of love, love and romance is one of the biggest parts of our business 365 days a year," he said.