Unilever's Vaseline Men is launching an online "Keep Your Grip Challenge" game on Wednesday linked heavily to the NFL and next month's NFL draft, with no fear the league's labor troubles will keep a selling opportunity from slipping through its fingers.

The game at KeepYourGripChallenge.com, created by Story Worldwide, New York, and hosted by gaming site WildTangent.com, challenges men to keep their grip on a virtual football using their keyboards to spin and elude virtual defenders as Vaseline Men pitchman Michael Strahan delivers up taunts and coaching. 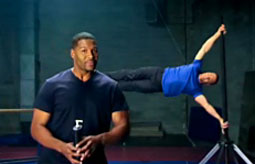 Of course, Vaseline might seem counterproductive for gripping a football. And for some, Mr. Strahan, a brutally effective former defensive end for the New York Giants who still holds the single-season record for sacks, might not seem the prototypical moisturizer user.

But that's the whole point for a brand touting its non-greasy, quick-absorbing formula and trying to show that it's perfectly macho for men to moisturize for, as Vaseline Men puts it, "stronger skin."

Were there any doubts guys would buy a moisturizer of their own, Vaseline Men has dispelled them since its 2008 launch. Lindsey Brink, Unilever senior brand director, said the men's line has helped Vaseline overall deliver double-digit sales growth each of the past two years. In a personal-care and packaged-goods market where many brands and categories have had trouble just maintaining household-penetration rates since the recession began, hand and body lotion is reaching more homes and consumers than ever thanks largely to the influx of men using Vaseline, she said.

About 40% of Vaseline's growth since the men's launch in 2008 has been from "market expansion," she said, with about 20% of the brand's growth from new-to-the-category buyers. Vaseline Men has around 90% of the men's hand- and body-lotion market, she said.

"Guys are using more, because they have a lotion that meets their needs," Ms. Brink said.

Gaming is big for Vaseline Men consumers, and in a series of tests, guys both liked playing the game (created using Unity 3-D technology on Wild Tangent), and came away with the intended message that a "lotion doesn't have to feel icky and greasy." They also remembered its selling line: "No grease, just strong skin."

Besides the game and digital ads from Story and social-media marketing from Rocket XL, there will be TV commercials created by iContent, New York. MindShare handled media planning and buying and mBooth handled PR. The TV and digital ads will be featured in NFL and NFL Draft content on Fox Sports, Yahoo, Google and elsewhere.

Of course, the NFL is in a sticky spot these days with the lockout that began earlier this month, jeopardizing the 2011 season and spawning controversy over the upcoming draft.

"I think guys remain interested in football" regardless of the lockout, said Unilever spokeswoman Stacie Bright.

"A lot of our mechanism for pulling guys into the game are in those places where guys will be chatting and learning about the draft," Ms. Brink said. "We wanted to tap into that passion point of sports and when this would be top of mind."