Wednesday Wake-Up Call: Best of the ABC and ESPN upfronts (including the top Jimmy Kimmel jokes) 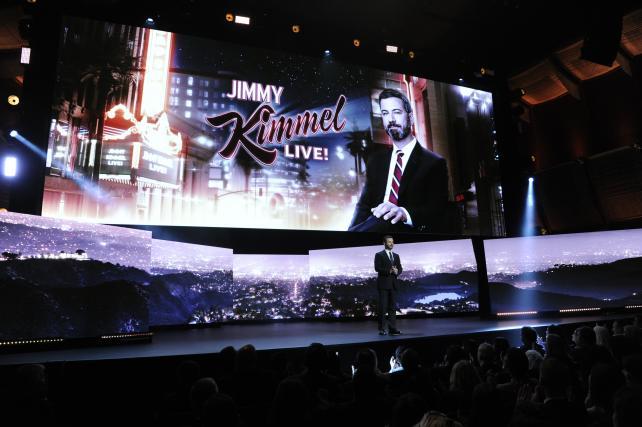 Welcome to Ad Age's Wake-Up Call, our daily roundup of advertising, marketing, media and digital news. What people are talking about today: Did you miss Jimmy Kimmel's comedy routine at the ABC upfront? Ad Age's Jeanine Poggi has you covered. Here's Kimmel poking fun at ABC: "Our new slogan is 'Forward Together.' Hillary Clinton had a yard sale, and she let us have that for almost nothing." And here's Kimmel making a jab at a rival network: "I have to admit I'm excited about 'Murphy Brown.' It's refreshing to see anything brown on CBS."
More on ABC: What a difference a year makes. Remember last year's cringeworthy "Roseanne" reunion at the ABC upfronts pitch to woo advertisers? Back then, as Poggi wrote, "The interaction between Roseanne Barr and John Goodman was awkward and the banter stilted." Variety advised the cast to work on their chemistry, and The New York Times said the reception in the room was "tepid." You know where this is going: The "Roseanne" reboot went on to become the most-watched entertainment program on TV, and ABC couldn't stop talking about it at this year's upfront. As Poggi writes, Disney Media Networks co-chair and president of Disney-ABC TV Group Ben Sherwood quipped:

"If anyone came to play a drinking game based on how many times we mention 'Roseanne,' you're welcome." Also, "The last time we had the No. 1 show was 24 years ago," he continued. "That's a bit of trivia we've conveniently forgotten to mention in the last 24 years."

Meanwhile: ESPN's event introduced its new president, Jimmy Pitaro, and let ESPN journalist Kenny Mayne have fun with his usual goofball antics. His comedy bit included a few digs at rivals: "Fewer ads for 70 percent more money is a good idea -- at least that's what NBC said." Ad Age's Anthony Crupi weaves an entertaining recap of the ESPN upfront, where execs peddled the message that "the immediacy of live sports makes ESPN one of the most sound investments an advertiser can make in an increasingly volatile everything-on-demand TV landscape."
Dancing with Jamie Foxx: Ad Age has a pop-up newsletter this week about the TV upfronts, and the most recent edition included some fun details on Fox's after-party. (Sign up for the newsletter, taking over the Media Buzz email this week only, right here.) Poggi writes that "Jamie Foxx, host of the network's 'Beat Shazam,' MC-ed the party, and danced with ad buyers and advertisers." We're guessing those ad execs will be reliving that moment for a while.

$10 million
In other Fox-related news, "Fox News' parent company has reached a roughly $10 million settlement to resolve a group of racial and gender discrimination lawsuits involving 18 current and former employees," The New York Times reports. One of them was a class action racial discrimination lawsuit filed by employees including Kelly Wright, Fox News' only black male anchor, The Times says. Fox News' image took a hit from the Roger Ailes and Bill O'Reilly sexual harassment scandals, and the new settlements are a reminder of other problems it's been dealing with.

Surprise, surprise
It's well-known that Mark Zuckerberg would love (LOVE) to bring Facebook to China's mainland, where the government blocks the masses from accessing it. He has waged a charm offensive to try to change that, even reportedly asking the Chinese president for a suggestion for his baby's name. Oh, and he also learned Mandarin. But it turns out that we haven't been looking at the full picture of Facebook in China. As Ad Age's George Slefo writes, the company actually gets quite significant ad revenue in China, even though it's blocked there, thanks to Chinese companies that want to reach consumers beyond their country's borders. As Slefo writes,

"Nearly 10 percent of Facebook's global revenue, or about $5 billion, comes from China, despite being banned from operating in the country, according to a new report by Pivotal research analyst Brian Wieser. This means China is the second-largest ad spender on Facebook, only behind the U.S."

Yes, you read that right: about $5 billion.

Spring cleanup
Twitter has a troll problem, and it's using behavioral clues to figure out who they are. Then it will bury their tweets so people don't see them. As Garett Sloane writes in Ad Age, "Twitter is trying to define what's offensive without stifling open discussion." It's not erasing the tweets, just downplaying them; the Australian Broadcasting Corporation described it as a kind of Twitter "spam filter." Facebook, meanwhile, is letting us know for the first time how much nudity, graphic violence and terrorist-inspired content gets posted there, as Sloane writes. The big takeaway: Facebook says its machines have "an easier time identifying nudity than, for example, hate speech." (Although it must be said that Facebook sometimes seems confused about naked flesh, too. See also, "Facebook sorry for censoring 30,000-year-old statuette of naked woman," via USA Today.)

Just briefly:
Yanny vs. Laurel: An audio clip of a talking robot has social media transfixed. Is the robot saying "Laurel" or "Yanny?" Ellen DeGeneres tweeted: "Literally everything at my show just stopped to see if people hear Laurel or Yanny. I hear Laurel." (No way. Totally Yanny.)

And now we can get back to actual news: The FBI and the Justice Department are investigating defunct political data company Cambridge Analytica, The New York Times reports, adding that the probe seems to be in the early stages.

Mark your calendar: On June 22 at the Cannes Lions Festival of Creativity, former WPP CEO Martin Sorrell will have a "candid discussion" with New Yorker writer Ken Auletta. Read more by Megan Graham in Ad Age.

RIP Tom Wolfe: His signature white suites (which he wore even in grubby Manhattan) were "a form of admirably persistent branding that served him well. He knew that you have to do a lot of wildly impractical things to get and stay famous," writes Ad Age's Simon Dumenco.

So sorry: Gap apologized because a map of China that was featured on one of its T-shirts "omitted territories claimed by China, including parts of southern Tibet, Taiwan and the South China Sea," Bloomberg News reports. Consumers had complained on social media.

Not to be confused with Quidditch: Quiddity is a new product review site from Figliulo & Partners that launches this week, writes Ad Age's Adrianne Pasquarelli. Because "as younger consumers change their shopping habits and startups offer more e-commerce sites, there is more interest in product reviews to pare things down."

Small but great: Ad Age's Jessica Wohl writes about the rise of small restaurant chains, which are "expanding mostly with localized, grassroots campaigns and strikingly limited traditional marketing." One of her examples is Chicagoland-based hot dog chain Portillo's. (On a side note: Have you tried the ribs at Portillo's? You really should.)

Creativity pick of the day: As Ad Age's Alexandra Jardine writes, Schweppes addressed sexual harassment with an experiment in Brazil, with Ogilvy Brazil making "a dress fitted with sensors that record every time the wearer is touched" and sending women into a nightclub wearing it. In case you're having trouble following this, yes, a fizzy beverage brand made a high-tech dress to prove a point about groping in nightclubs. Jardine explains it better; read more and watch the video here.