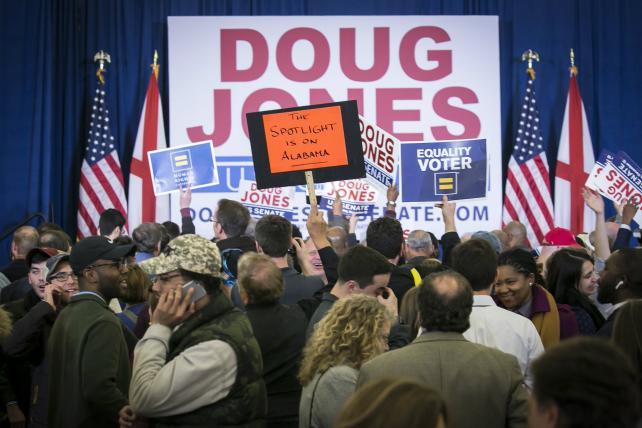 What people are talking about today
Democrat Doug Jones won an upset victory in Alabama's Senate race, which was a close one even after Republican candidate Roy Moore was accused of sexually abusing teenage girls. The battle was fierce, and so were some of the ad messages.

"A vote for Doug Jones is a vote for more black abortions," is one line of dialogue in a conservative super PAC's radio ad targeting black voters, according to The Washington Post. Meanwhile, the Post says, online pre-roll ads paid for by Democratic super-PACs accused Moore of having ties to white supremacists who inspired Dylann Roof, convicted a year ago for the killing of nine black parishioners in South Carolina.

Leading to the win, the Democratic candidate's campaign shelled out more on TV ads – way more. As of Friday, Jones' campaign "had outspent Moore by nearly a six-to-one margin on the airwaves, $7.2 million to $1.2 million," according to data from Advertising Analytics, NBCNews.com says. Politico, which has called the ad spending imbalance "stunning," says funding for Jones' campaign was fueled by "millions of online dollars pouring in to defeat Moore."

Moore, who has denied any sexual misconduct, has yet to concede -- though President Trump, who had reportedly recorded a robo-call on behalf of Moore, congratulated Jones, with a caveat or two, on a "hard-fought victory."

Out
Adam Grohs, who until Tuesday was SapientRazorfish's business development lead for North America, "is no longer with the company, following reports that he created a hostile work environment and discriminated against women," Ad Age's Lindsay Stein reports. According to Stein's report, a woman who filed a complaint against Grohs last year says that "he's a bully. I'd walk into rooms and he'd tell me to shush. He'd scream and yell. I literally couldn't do my job. He was very disrespectful." Stein talked to five women about Grohs' behavior.

(More) harassment news
The NFL Network and ESPN have suspended five former NFL players following sexual harassment complaints by a woman who worked with them, CNN says. The suspended players-turned-commentators include a Hall of Famer, Marshall Faulk. Jami Cantor, a former wardrobe stylist at the NFL Network, filed a lawsuit in California, according to CNN. The episodes she describes date back to a time they all worked at the NFL Network; several have moved on to ESPN. The suit also reportedly targets a former executive producer, Eric Weinberger, who is now president of The Ringer website and who also has been suspended. CNN says he allegedly sent "Cantor nude photos of himself and pressed his crotch against her shoulder, asking her to touch him." Cantor also accuses the network of wrongful termination. The complaint focusing on the NFL's network is one more thing for the league to deal with, along with the anthem protest and Twitter attacks by President Trump.

Taxes, taxes, taxes
Facebook, which has been taking some heat about where it pays its taxes on its ad revenue, reportedly is going to overhaul its tax structure. Bloomberg News says the social network soon "will pay taxes in the country where sales are made, rather than funneling everything through its Irish subsidiary." It reportedly hopes to have the plan fully rolled out by the first half of 2019.

Facebook, like some other big companies, set up a subsidiary in Ireland because of a favorable tax rate there. But it's embroiled in a conflict with the Internal Revenue Service in the U.S., and faces pressure in Europe as well. The Wall Street Journal says "the change won't affect Facebook's self-service ads, bought directly on its website by millions of advertisers."

Just briefly:
Brothers: Two brothers from India are getting Cannes Lions' lifetime achievement award, the Lion of St. Mark. Ogilvy says Piyush Pandey, executive chairman and creative director for Ogilvy South Asia, is being honored, and so is his brother, film director Prasoon Pandey. They're the first Asians to win.

Tesla: PepsiCo has reserved 100 of Tesla's new electric Semi trucks, and Reuters says it's the largest-known order for the vehicles so far.

Feminism Part 1: The Miriam Webster dictionary's Word of the Year is "feminism."

Feminism Part 2: On that note, check out Grey London's campaign that rewrote Christmas carols to give them a feminist slant. As Ad Age's Alexandra Jardine writes, they're no longer Christmas "hymns," they're "hyrrs." And "Deck the Halls with Boughs of Holly" becomes "Kick the Balls (of Patriarchy)" Read more here, and have a listen.