Thursday Wake-Up Call: Backlash against a Bar Refaeli ad, and a lawsuit against an Instagram influencer 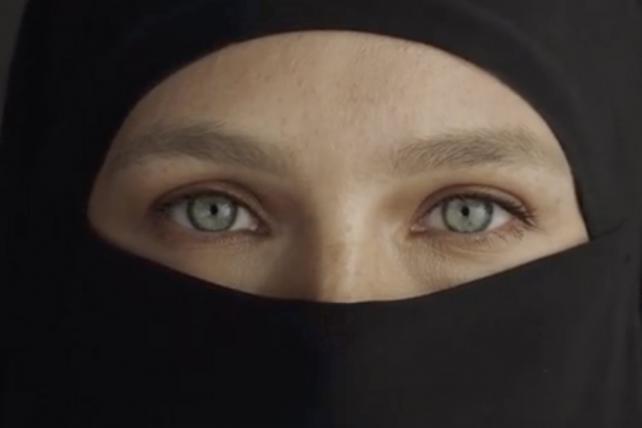 Welcome to Ad Age's Wake-Up Call, our daily roundup of advertising, marketing, media and digital news. Note: It's not too late to book your spot at Ad Age Next, happening Nov. 13 and 14 in New York. We'll be taking on topics including the online trust crisis, the market for cannabis, the rise of esports and more. Read all about it here.

What people are talking about today
What do you do about the Halloween candy you don't like, the stuff that collects dust for months? (In our house, it's Tootsie Roll. Sorry, Tootsie Roll!) Reese's made a vending machine that swaps out your unloved treats to give you Reese's Peanut Butter Cups instead. Read about it in the Ad Age Marketer's Brief.
More post-Halloween reading: "How 25 of Your Favorite Halloween Candies Got Their Names," from Mental Floss. (Snickers was apparently named after the Mars' family's beloved horse. Who knew?)

What?
Israeli model Bar Refaeli appears in a clothing ad that shows her ripping off a black niqab as a song about freedom plays. The campaign from the Israeli brand, called Hoodies, is called "Freedom is basic." The ad quickly inspired "outrage and attracted accusations of Islamophobia," The BBC reports. One user tweeted: "FREEDOM IS HAVING THE CHOICE TO WEAR WHAT YOU WANT! delete your islamophobe and inappropriate commercial." The ad was removed from some places it had been posted on social media, but a version remained on the model's Facebook page. The BBC says it has reached out to the brand for comment.

Business as usual
Rihanna reportedly turned down an offer to perform at the Super Bowl, and Amy Schumer says she won't star in any of the event's ads. The celebrity snubs are a show of displeasure at the way the NFL handled former player Colin Kaepernick's protests against racial injustice. But advertisers don't seem to be following their lead, as Ad Age's Jeanine Poggi writes. "We have not had any clients express any concerns," Gibbs Haljun, managing director, media investment at GroupM, said. Poggi's conclusion: "No, political strife won't hurt Super Bowl advertising."

Influence
A PR firm filed a lawsuit against an Instagram "influencer" who allegedly failed to do enough influencing. As Ad Age's Garett Sloane writes, Luka Sabbat was hired to promote Snapchat Spectacles, but PR Consulting says he only made two posts instead of the four he was contracted for. And "Sabbat is being sued for $90,000 to make up for the alleged breach of contract," Sloane writes. The lawsuit was filed in New York; Snapchat is not named as a party. Sabbat is on the Freeform series "Grown-ish" and has 1.4 million Instagram followers. Variety notes that he "was photographed in September at events with Kourtney Kardashian. People recently reported that the pair split after briefly dating." (Note to aspiring influencers: Being spotted about town with a Kardashian is something to add to your to-do list. Variety says Sabbat signed the contract to plug Snapchat the day after the pair was first seen in public.)

Just briefly:
Diet Coke is it: A rebrand and new flavors boosted Diet Coke revenue and volume sales, Coca-Cola says. CEO James Quincey told CNBC that millennials are getting more into the diet soft drink: "I think it's a combination of some marketing inviting reconsideration for a generation where perhaps not all of them are connected to Diet Coke."

The most wonderful time of the year: Starbucks holiday cups are out, and the brand is "playing it safe with designs that are unlikely to spur the kind of backlash elicited by some of its previous more polarizing packaging plays," Ad Age's Jessica Wohl writes. Also, Target's holiday campaign is "a series of colorful, upbeat spots that include a new song from Sia," Ad Age's Adrianne Pasquarelli writes.

The ice cream of the resistance: Ben & Jerry's has a new flavor called "Pecan Resist." And the brand "wants you to stress-eat about the midterms with purpose," Fast Company writes.

Out: "A top executive at Alphabet Inc.'s experimental moonshot unit has left the company after the New York Times reported he was accused of sexual harassment," Bloomberg News writes. Rich DeVaul was a director at X, the company's lab for futuristic projects.

Catchphrase of the day: After fair-trade coffee and farm-to-table cuisine, the digital and tech marketing industry is touting what it calls "ethically sourced data." Ad Age's Garett Sloane explains what's up.

Ad of the day: In a new ad for an Air Wick bathroom spray, a "straight-talking pilot shares his secrets for mile-high pooping," Ad Age's I-Hsien Sherwood writes. And the pilot delivers his pitch, deadpan, while sitting on the commode. Check it out here.