Friday Wake-Up Call: Coca-Cola is buying a global coffee chain, and other news to know 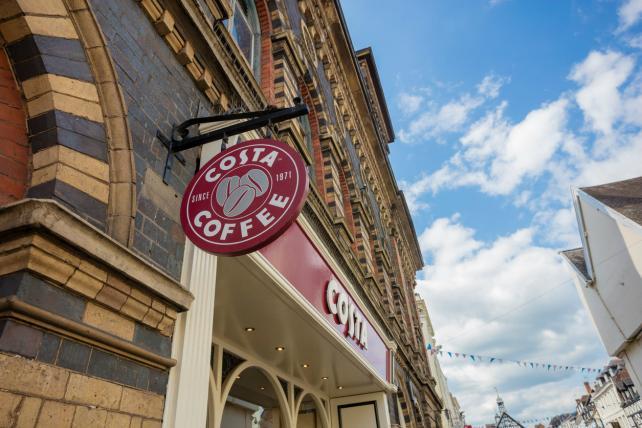 A Costa in Bridgnorth in the U.K.
Credit: iStock/LPettet

Welcome to Ad Age's Wake-Up Call, our daily roundup of advertising, marketing, media and digital news. You can get an audio version of this briefing on your Alexa device. Search for "Ad Age" under "Skills" in the Alexa app. What people are talking about today: Coca-Cola Co. is buying a global coffee chain. The company says it will spend $5.1 billion to buy the U.K.'s Costa Coffee, which has almost 4,000 locations in 32 countries, The Wall Street Journal reports. In comparison, Starbucks has 28,000 stores in 77 markets. Like Starbucks, Costa has been expanding its presence in China, a fast-growing market for coffee.
Missing piece: "Hot beverages is one of the few remaining segments of the total beverage landscape where Coca-Cola does not have a global brand," Coca-Cola CEO James Quincey said in a statement. This deal fills that gap. (Coke does already have a brand of canned, ready-to-drink coffee called Georgia that's popular in Japan and some other Asian markets.)
Some context: Coca-Cola is buying Costa from the U.K.'s Whitbread Plc. "The acquisition is also the latest sign of how soda makers are diversifying as they look to move beyond sugary pop," The Wall Street Journal writes. "PepsiCo Inc. earlier this month bought seltzer-machine maker SodaStream International Ltd. for $3.2 billion." (Score one for Midwesterners: The Journal called it "pop," not "soda.")

Martin Sorrell's successor
Who will be the next CEO of WPP, the biggest global ad giant by revenue? Not much surprise here: "The one executive who's persistently stood out as the likely successor to Martin Sorrell at WPP Plc, Mark Read, is set to officially take the helm," Bloomberg News reports. The appointment is expected to happen early next week, Bloomberg says, citing multiple unnamed sources. Read, 51, has been interim co-chief operating officer after WPP founder Martin Sorrell exited suddenly in April. Read joined WPP after graduating from the University of Cambridge, and he has spent much of his career there, including as global CEO of WPP's Wunderman. These are tough times for WPP and the ad industry in general, with some clients cutting back on spending and new competition from consultancies. Read, a WPP insider, will have to show he can bring fresh ideas.

Snapchat news
Snapchat has been trying to attract more advertisers, and it has a new head of advertising to help do that. As Ad Age's Garett Sloane writes, Kristen O'Hara, previously chief marketing officer at WarnerMedia, is now Snapchat's VP of global business solutions and oversees U.S. sales. The role was previously held by Jeff Lucas, who moved to Oath. As Sloane writes, "Snapchat, which generates even less ad revenue than Twitter does, is trying to attract advertisers with the lure of a young audience and relatively cheaper ads." eMarketer says Snapchat is the No. 1 app among teens.

Shhhhh
Google has reportedly been tracking whether Mastercard users are influenced by online ads to make purchases later when they're offline, Bloomberg News reports. The two companies reportedly cut a secret deal. As Bloomberg writes:

"For the past year, select Google advertisers have had access to a potent new tool to track whether the ads they ran online led to a sale at a physical store in the U.S. That insight came thanks in part to a stockpile of Mastercard transactions that Google paid for."

Google told Bloomberg that it built "a new, double-blind encryption technology that prevents both Google and our partners from viewing our respective users' personally identifiable information." Mastercard also says that no individual transaction data or personal data is provided. But still: Has Google crossed the creepy line yet?

NBC: Why did Ronan Farrow take his reporting on sexual harassment allegations against Harvey Weinstein to The New Yorker when he had started working on it at NBC? His ex-producer says NBC impeded his reporting, The New York Times writes.

'Malicious': As The New York Times reports, "users of a variety of popular apps and services, including Snapchat, awoke Thursday morning to find that New York City had been relabeled 'Jewtropolis' on maps displayed in the apps." A third-party company called Mapbox said there had been "malicious edits" to its maps.

Secret formula: Starbucks is trying to make its Frappuccinos less decadent. The Wall Street Journal says Starbucks tested over 20 types of cream and 70 vanilla flavorings in search of a less sugary, less caloric rendition. Fans of the current Frappuccino formula, avert your eyes from this sentence: "Some versions of the drink contain more than twice as much sugar as a standard Snickers bar and far more calories," The Journal writes.

Creativity pick of the day: Pork producer Farmland Foods has a simple logo showing the sky, clouds and grass. For whatever reason, Supreme, the trendy streetwear brand, recently "debuted a hat featuring a logo that bears a striking resemblance to that of Farmland's simple, pastoral graphic--with Supreme's name replacing that of the pork manufacturer," writes Ad Age's Ann-Christine Diaz. Instead of scolding Supreme, Farmland embraced the move and even did a fashion show with farmers wearing Surpreme garb. Check it out here.