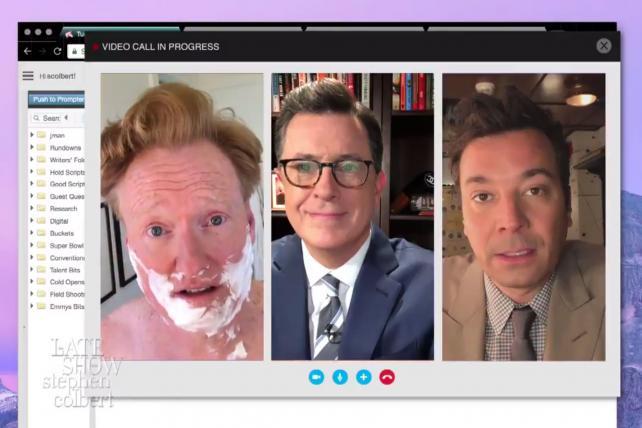 Welcome to Ad Age's Wake-Up Call, our daily roundup of advertising, marketing, media and digital news. You can get an audio version of this briefing on your Alexa device. Search for "Ad Age" under "Skills" in the Alexa app. What people are talking about today: Jimmy Fallon of NBC, Stephen Colbert of CBS and Conan O'Brien of TBS broke through TV network barriers and acted together in a sketch mocking President Trump. (Watch it here.) The cold open aired on both "The Tonight Show" and "The Late Show"; it shows Colbert and Fallon video-chatting and commiserating about the names Trump just called them at a rally ("low-life" for Colbert and "lost soul" for Fallon.) In the sketch, they also call up O'Brien, who's in the middle of shaving and seems totally perplexed to be reminded who the president is.
"The real estate guy who sells steaks? He's president? How's he doing?" O'Brien asks. "Not so good," Colbert answers.
The sketch wasn't too pointed; it was mostly notable for the late-night stars' teamwork and for the fact that Fallon joined in, despite his more apolitical humor. It did end on a jab. "Hey, we still on for lunch?" Fallon asks. "Yeah, where you wanna eat?" Colbert says. "Red Hen?" "Red Hen!"

Bye bye
Google is rebranding its ad business. And as Ad Age's Garett Sloane writes, that means it will stop using a few brand names that are a big part of the industry's lingo: AdWords will become Google Ads, and DoubleClick will be called the Google Marketing Platform and Google Ad Manager. The switch is designed to make the offering less confusing, and it also signals new ambitions. As Sloane writes, the streamlined ad business "will position the company to look more like a marketing technology platform, competing for enterprise relationships with Adobe, Oracle and others." And according to one agency exec Sloane talked to, the new simplified platform means brands might not need to rely on agencies as much to handle their digital advertising.

Grass in your glass
Are beverages spiked with pot about to go mainstream? Craft brewer Lagunitas is going to sell something called Hi-Fi Hops in California, where recreational cannabis is legal. As E.J. Schultz writes in Ad Age, the new offering is an "IPA-inspired" sparkling water infused with THC, the cannabis ingredient that gets you high. Lagunitas is owned by Heineken, so this represents a major player getting into the business. Lagunitas' press release says the zero-calorie product contains "no gluten, no carbohydrates and a smidge of California sun-grown cannabis in every sip." Bonus: The cans come in child-resistant packaging, which seems like a very good idea.

Heavyweight
World Wrestling Entertainment inked five-year television rights deals with USA Network and Fox Sports, which "more than triples the fees it was receiving in its previous deal," The Wall Street Journal says. The deal shifts "SmackDown Live" to Fox, continuing the network's "shift from a roster of scripted entertainment content to one that depends primarily on sports, news and live 'event' programming," as Ad Age's Anthony Crupi wrote last month in anticipation of the move. "SmackDown" is jumping to Friday nights, where it will sandwiched in the fall by Fox's "Thursday Night Football" and Saturday college football broadcasts.

Quote of the week
Director Ridley Scott's famous, dystopian "1984" ad for Apple revolutionized Super Bowl advertising. But as he tells Ad Age's Ann-Christine Diaz, the project came out of left field for him. "When they brought it to me, they said, 'This is for Apple.' I thought they meant for the Beatles," he says. Apparently, Scott didn't even watch the Super Bowl the year his now-classic ad ran. Another fun factoid: The man who made "Blade Runner" still uses a fax machine. The full interview is here.

Just briefly:
Actually: Facebook banned all cryptocurrency ads in January, but now it says it will allow "some preapproved advertisers to promote crypto businesses and services, like exchanges," Recode says. Ads for initial coin offerings are still a no-go, though.

Something new: OMD is shutting its Ignition Factory, which worked on out-of-the-box ideas for clients for 10 years, in favor of a new model, Ad Age's Megan Graham writes.

Moving on: Dawn Ostroff is leaving her job as president of entertainment at Condé Nast to become Spotify's chief content officer. Read more by George Slefo in Ad Age.

Anti-airbrushing: Dove has a new insignia that will appear on all the brand's static images by Jan. 2 to show they haven't been digitally manipulated, Ad Age's Ann-Christine Diaz writes. The mark says "No digital distortion." CVS has a similar insignia for images that haven't been retouched.

Pizza and champagne: Pizza Hut's latest creative agency of record is Austin-based GSD&M, which replaces Droga5. "GSD&M says it learned of its win when Pizza Hut's marketing team showed up in a bus stuffed with pizza and champagne," Jessica Wohl writes in Ad Age. The chain has been churning through agencies in recent years.

Muffin tops: McDonald's has a new breakfast offer, a "ploy lifted straight from a 1997 'Seinfeld' episode -- selling only the tops of muffins," Bloomberg News writes. Because the tops are the best part.

Creativity pick of the day: Norway's tourism board is reportedly fuming about 7-Eleven's new ad there (and John Oliver is cracking jokes about it.) As Ad Age's Alexandra Jardine writes, "It starts off like a tourism ad, extolling the virtues of Norway's spectacular scenery, lake and fjords." But then it takes a curious turn: The spot also points out that Norway has one of the highest rates of chlamydia in Europe. And it ends with, "Protect yourself against the locals! Get your condoms at 7-Eleven." Check it out here.