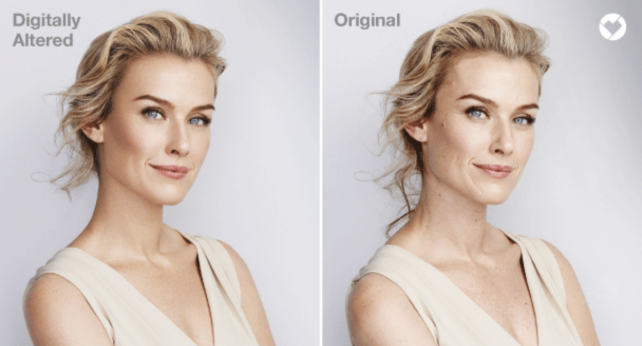 On the left, a touched-up image. On the right, an unaltered one.
Credit: CVS

What people are talking about today: CVS is getting body-positive: The drugstore giant says it's cracking down on photo-shopping of beauty imagery it uses in stores, online and in marketing materials. It created a heart-shaped insignia – which it calls "CVS Beauty Mark" -- that it will stamp on images that have not been significantly altered. The goal is to have its own brand's beauty images free of touch-ups by April 2019, it's putting pressure on its suppliers to join in, as USA Today reports. "The nation's largest drugstore chain will also require other makeup and beauty brands that sell products in its aisles to commit to a photo-manipulation ban by 2020 or face having an alert label placed on the images," USA Today says. It's feasible some beauty brands could be squeamish about showing model's pores and wrinkles. (Procter & Gamble, L'Oreal and Coty, any thoughts?) But seriously, how many consumers will object to this? Bring on the freckles and laugh lines. We can handle it.

Not so body-positive
A new Victoria Beckham ad shows a very, very thin woman modeling eyeglasses, and The New York Times says the image, featuring Lithuanian model Giedre Dukauskaite, "has drawn a fierce public response." On Twitter, author Amanda Foreman said the model "looks like a teenager with severe anorexia," while Piers Morgan wrote a column saying the ad made him feel "physically sick." On social media, such comments drew occasional concerns about thin-shaming, though most commenters were worried the image sent a dangerous message about beauty standards to girls and young women. On Facebook, someone used the hashtag #BeLikeFrance – France has banned super-thin models, and it's cracking down on airbrushed bodies in ads, which is in the zeitgeist (see above.)

"Black-ish"
Last year, Procter & Gamble created an unusual ad entitled "The Talk" that spotlighted difficult conversations black mothers have had with their kids to prepare them for racial prejudice. ("Listen. It's an ugly, nasty word, and you are going to hear it. Nothing I can do about that. But you are not going to let that word hurt you.") Variety reports that P&G has signed a deal with ABC to have characters on the show "Black-ish" discuss the spot in today's episode. As Variety notes, actor Anthony Anderson plays character Dre Johnson, an ad exec; one past plotline in the show featured State Farm, a client of the character. Will viewers realize P&G paid to have its message integrated into the plot?
Also: ABC's "Black-ish" was a big winner at the NAACP Image Awards, and Ava DuVernay was named entertainer of the year, The Associated Press reports.

"Cool to creepy"?
In December, The New York Times reported on allegations of sexual harassment and misconduct at Vice, which made its name as an edgy, irreverent voice in the media. Now, "Vice could be at risk of going from cool to creepy for brands concerned with the alleged sexist culture at the gonzo publisher's offices," as Ad Age's Garett Sloane and Adrianne Pasquarelli write. As they report, at least one major marketer, Ally Financial, is meeting with the publisher to discuss its concerns, and other brands are watching to see how Vice continues to respond on the issue.

#MeToo?: Comedian Aziz Ansari responded to an allegation of sexual misconduct against him that appeared on the website Babe, saying the encounter was "completely consensual." The allegation is sparking a lot of debate about what constitutes misconduct. A New York Times opinion writer says, "There is a useful term for what Grace experienced on her night with Mr. Ansari. It's called 'bad sex.' It sucks."

H&M: H&M temporarily closed all its stores in South Africa following reports that protesters had left several locations in disarray, CNN reports. Demonstrators were angry about an H&M ad in the UK that showed a black child wearing a T-shirt that read "coolest monkey in the jungle."

Super Bowl Update: Toyota is buying two 60-second spots in the Super Bowl, and its luxury brand Lexus will advertise there too, as Ad Age's E.J. Schultz reports.