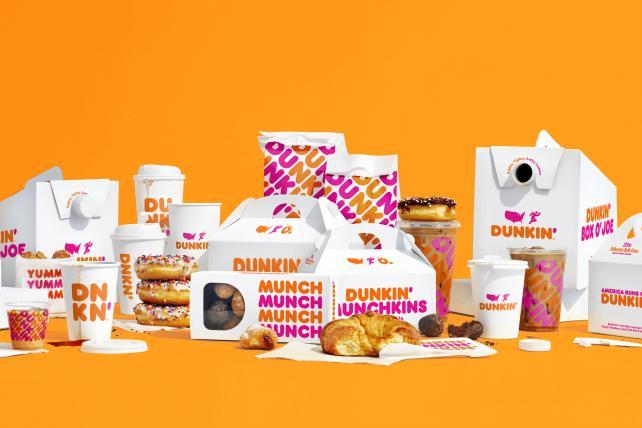 Welcome to Ad Age's Wake-Up Call, our daily roundup of advertising, marketing, media and digital news. You can get an audio version of this briefing on your Alexa device. Search for "Ad Age" under "Skills" in the Alexa app. What people are talking about today: Both Weight Watchers and Dunkin' Donuts rid themselves of excess baggage this week. Weight Watchers dropped the "Weight" from its moniker and is calling itself WW. And Dunkin' Donuts is editing the word "Donut" out of its brand name, though it still serves doughnuts, as Ad Age's Jessica Wohl writes. Here's the key to understanding the new branding, which will start rolling out in January: "Drinks, led by coffee, make up 60 percent of Dunkin's sales," Wohl writes. Plus, maybe you'll feel less guilty about your Dunkin' habit once the word "Donuts" is banished from the signs. "Donuts" is a reminder, in huge neon letters, that you just scarfed down a 490-calorie Glazed Jelly Stick.

Just for the taste of it
President Trump, Diet Coke enthusiast, just gave the brand another implicit endorsement, this time on the global stage. At the U.N. General Assembly meeting Tuesday, he toasted with a wine glass full of the bubbly beverage, a scene widely commented upon in social media. As Ad Age's E.J. Schultz writes, there's obviously nothing wrong with skipping wine. Viewed through a marketing lens, though:

"Trump's Diet Coke obsession is potentially problematic for a brand trying to grow its base beyond aging baby boomers. Brands spend a lot of time and money getting their products seen in the hands of celebrities who appeal to their target. Trump's approval rating with people ages 18 to 29 years old is 26 percent, compared with 41 percent for all adults, according to an Aug. 29 Gallup poll."

Flashback: Another memorable Trumpian brand endorsement came during the leaked recording of Trump talking to his then-lawyer, Michael Cohen. "Get me a Coke, please!" Trump shouted to someone during the call. When the tape was released in July, The New Yorker wrote that Diet Coke seems like "the elixir of soft-bodied plutocrats desperate to shed their shady pasts, and, possibly, a few pounds."

Empire building
Michael Kors is snapping up Italian luxury brand Versace for $2.1 billion. The new multi-brand umbrella company will be called Capri Holdings—named after the island in Italy, not the unflattering cropped pants. Jimmy Choo, which Michael Kors acquired last year, will be part of it too. Despite the Italian name, the deal signifies that "America has its first global luxury group," The New York Times writes. The Kors brand is more accessible and affordable, while Versace is showy and high-end, but there are similarities, The Times says. They each have a sense of humor, and "a shared affinity for a fake tan."
More empire building: Perhaps it's jarring to pair news of a luxury acquisition with a growing fast-food conglomerate, but ... oh well. Inspire Brands Inc., owner of Arby's and Buffalo Wild Wings, announced plans to buy Sonic Corp., which serves burgers, Oreo Peanut Butter Shakes and more at over 3,600 drive-ins. Read more by Ad Age's Jessica Wohl.

Not a "Big Bang"
The 2018-201 broadcast TV season debuted Monday, "mostly with a whimper," Ad Age's Anthony Crupi reports. Starting with the bad news, the return of "Big Bang Theory" for its twelfth and final season came in 34 percent under its target-demo premiere performance last year. Crupi writes:

"For CBS, which found itself having to rebuild its once-formidable Monday prime-time lineup after the night lost nearly 25 percent of its audience—and which must confront the season that lies ahead in the absence of longtime leader Les Moonves—the opening deliveries couldn't have been more disheartening."

One potential bright spot is NBC's new supernatural drama "Manifest," which outperformed its lead-in, "The Voice."

Just briefly:
Cosby show: Bill Cosby, the 81-year-old comedian, actor and longtime pitchman for products like Jell-o, was sent behind bars for three to 10 years for sexually assaulting a woman in 2004, The New York Times reports. His lawyers are framing "their client's downfall as an unjust product of the #MeToo era," The Times says.

Nike news: Nike sales were up even before the brand debuted its much-discussed ad featuring former NFL player Colin Kaepernick. Revenues in the quarter ending Aug. 31 jumped 10 percent over the year-earlier period. Executives avoided discussing the Kaepernick ad on a conference call until questioned by analysts, and even then CEO Mark Parker avoided mentioning the former San Francisco quarterback by name. Read about it by Ad Age's E.J. Schultz and Adrianne Pasquarelli.

New hire: Under Armour, which announced layoffs for 400 people last week, is getting a new CMO. Adrianne Pasquarelli reports that Alessandro de Pestel is a fashion vet who spent 12 years at Tommy Hilfiger.

Fly: Flywheel Sports, founded as a cycling studio, is branching out into other exercise formats, and its new marketing campaign pushes the brand as "more fly, less wheel," Ad Age's Adrianne Pasquarelli writes.

Non-toxic: Twitter wants to clamp down on "dehumanizing speech" on its platform, and it's seeking public feedback. Read more in Wired.