Friday Wake-Up Call: The #GoogleWalkout. Plus, the best holiday ads so far 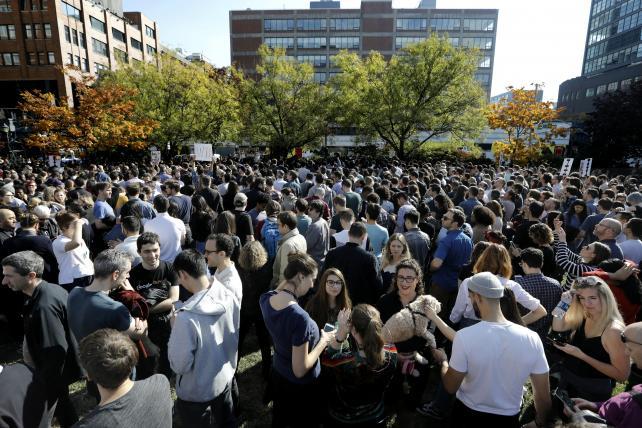 Welcome to Ad Age's Wake-Up Call, our daily roundup of advertising, marketing, media and digital news. Friendly reminder: Ad Age Next, our conference on the future of marketing and tech, is happening Nov. 13 and 14 in New York. Startups will pitch live to industry leaders Bonin Bough, Cheryl Cheng, Michael Kassan and Gary Vaynerchuk. Read all about it here.

What people are talking about today
Google's walkout was much, much bigger than initially expected. Employees from Mountain View to Dublin to Singapore walked off the job Thursday to protest how the company has handled sexual misconduct accusations, with thousands of employees taking part, Bloomberg News reports. Photos shared on social media under the hashtag #GoogleWalkout showed protesters toting signs that read "Not OK, Google," and "Don't Be Evil." Earlier this week, the first report about the demonstration suggested a much smaller protest was in the works, with around 200 employees taking part. The outcry followed a New York Times report that the creator of Google's Android software, Andy Rubin, was handed a $90 million departure package, despite a sexual misconduct claim against him. (Rubin denies the misconduct allegation.) Many of the protest signs referenced the $90 million figure; one sign shared on social media read, "What do I do at Google? I work hard every day so the company can afford $90,000,000 payouts to execs who sexually harass my coworkers."
What Google's CEO said: "Google sets a very, very high bar, and, obviously, we didn't live up to our expectations," Sundar Pichai said at a New York Times conference. Read more via Quartz.
Also: This New York Times story has a killer anecdote about the time the Google co-founders struggled to name their female role models during a staff meeting. Then Sergey Brin "tried to recall the name of a woman he had recently met at a company event who had impressed him." It was Gloria Steinem.

"The anti-tracking feature embedded in the newest version of Apple's Safari browser is causing pain among marketers, making it harder to calculate the return-on-investment for digital ads, industry experts say. …The update prevents marketers from targeting Safari users across the web. For example, someone who visits Nike's website can't be targeted elsewhere on the web, such as Google search or the New York Times website."

It's unsurprising, really. For months, Apple CEO Tim Cook has been railing against the collection of user data. "This is surveillance and these stockpiles of data serve only to make rich the companies that collect them," Cook said last month. "This should make us uncomfortable."
More on Apple: The company just "reported its fourth consecutive quarter of record revenue and profit," The Wall Street Journal reports.

All I want for Christmas
Maybe you haven't thrown out your rotting jack-o-lantern yet. Perhaps you have no clue what to put in the stuffing of your Thanksgiving turkey. Retailers are way ahead of you: They're already putting their end-of-the-year holiday ads out there. Ad Age's Adrianne Pasquarelli has been keeping track of them. Here's a recap so far:
This Kohl's ad about a female hero delivering presents by horseback was inspired by "Westworld," Pasquarelli writes. The ad is from The Martin Agency.
Some Target ads "are set to a modern version of 1950s hit 'Round and Round' performed by Sia," Pasquarelli writes, adding that the song will be sold exclusively by Target. It's pretty catchy, despite the rather cheesy musical accompaniment.
Ikea is putting a focus on diversity in its U.S. ad from Ogilvy New York, Pasquarelli writes. The voiceover says, "Our holidays don't all look the same—maybe that's what makes us great." (Is that an oh-so-subtle retort to "Make America Great Again"?)
Note: We are still awaiting the mother-of-all-Christmas-retail-ads, the John Lewis spot from the UK. The UK's Telegraph has assembled all the John Lewis ads from past years so people can watch reruns while they await the 2018 rendition. (Of course you've already seen "Monty the Penguin," but there are others to watch. And hey, it's Friday.)

You can't go home again: "Lachlan Murdoch on Thursday put an end to speculation that Megyn Kelly would return to Fox News now that her show on NBC has been canceled," CNBC reports.

Review: SodaStream is in the market for a new creative agency in the U.S., as Megan Graham writes in Ad Age. The brand is being bought by PepsiCo.

Crystal ball: "We are about to see the largest shift in media and advertising we have ever experienced in the entire world," Complex Media CEO Rich Antoniello says. Listen to his conversation with Ad Age Editor Brian Braiker on this week's Ad Lib podcast.

Creativity pick of the day: "Here's one way to market the autonomous cars of the future: put them in an animated movie starring Will Smith," Ad Age's E.J. Schultz writes. That's what Audi did. In a rather fancy product placement, Audi put a futuristic animated car into the upcoming "Spies in Disguise," set for September 2019. Check it out here.