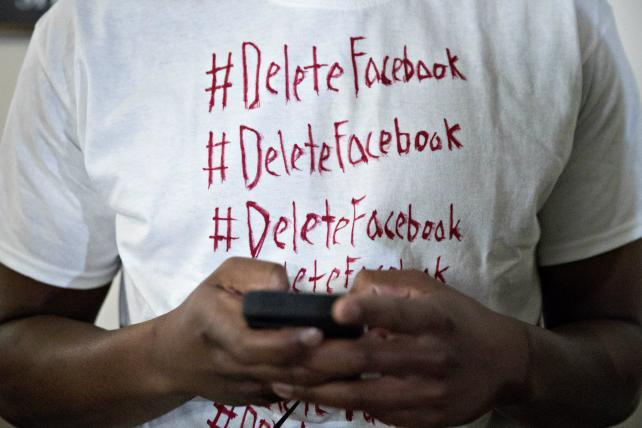 Welcome to Ad Age's Wake-Up Call, our daily roundup of advertising, marketing, media and digital news. You can get an audio version of this briefing on your Alexa device. Search for "Ad Age" under "Skills" in the Alexa app. What people are talking about today: Facebook's share price plummeted over 20 percent in after-hours trading, and it seems like a (very) delayed reaction to the successive scandals that have hit the company. After Facebook reported quarterly financial results that didn't meet analysts' expectations, "shares lost any gains they had made this year," as Ad Age's Garett Sloane reports. "Investors were spooked by forecasts from the company that revenue growth would continue to decelerate." Earlier in the day Wednesday, Facebook shares reached a record high. Investors had until now shrugged off Facebook's problems, including the Cambridge Analytica data scandal and Russia using the social network to interfere in the U.S. presidential election. And advertisers have continued to spend big on the platform.
Numbers of note: Facebook lost 3 million daily active users in Europe in the second quarter, while grappling with fallout from the scandal and the rollout of Europe's strict GDPR privacy rules, leaving that number at 279 million. The number of users in North America remained flat, at 185 million people. In well-established markets, there's less room for Facebook to grow.
And yet: Despite missing analyst expectations, Facebook reported some truly huge revenue numbers. Such as this: "The ad sales portion of revenue hit $13 billion in the second quarter, good for a gain of 42 percent from the year prior," Sloane writes.
'The entire market value of McDonald's': Facebook's stock price plunge "would wipe roughly $130 billion from the company's value if it holds when the markets open on Thursday," The Wall Street Journal writes. "That would be more than the entire market value of McDonald's Corp., although after-hours declines don't always correspond to market prices the next day."

Never mind
In other Facebook news ... Reports a day ago said the company was granted the right to set up a subsidiary in China, where it planned an innovation hub. That seemed like a breakthrough for Facebook in the world's biggest internet market, where a Chinese government firewall blocks internet users from accessing the platform. Well, it's not going to happen. Some references to the move were censored in Chinese media, and approval was withdrawn, The New York Times says, citing an anonymous source. As The Times writes, there was a disagreement between local officials and the national internet regulator, the Cyberspace Administration of China, "which was angry that it had not been consulted more closely." China seems impervious to Mark Zuckerberg's charm offensive (once he reportedly asked President Xi Jinping to suggest a Chinese name for his child. Also, he learned Mandarin.)

"The unit was behind 2017's widely mocked Kendall Jenner ad. But Creators League also backed successful efforts, including 'Uncle Drew,' a movie based on a viral Pepsi ad that hit theaters earlier this summer."

New guy
Anheuser-Busch InBev is getting a new global CMO: Pedro Earp, who has been running the brewer's global innovation unit, called ZX Ventures. As E.J. Schultz writes in Ad Age, Earp will keep that role, while adding on the CMO job. "There are some things that are really working in ZX ventures," Earp tells Schultz. "I think it's time for us to start scaling them in our core business." Earp replaces Chief Marketing Officer Miguel Patricio, who will stay at the company overseeing global marketing projects and reporting directly to CEO Carlos Brito.
It's raining men: As Schultz notes, "With Earp's promotion, AB InBev's 18-person global management team remains all male … The lack of diversity was cited in a February report by Sanford C. Bernstein, which noted that 'all-male management teams are cutting themselves off from half the talent in the world.'"

Another new guy
The new Hearst Magazines president is Troy Young, who spent five years heading its digital operations. He replaces David Carey, who announced his departure a month ago, and he'll oversee publications including Cosmopolitan, Esquire, Men's Health, Elle and HGTV Magazine.
Here's a brief excerpt of his Q&A with Ad Age's Nat Ives:

"The nature of magazines change when a consumer gets their news in the moment from their phone. It makes you think differently about the role of the magazine. It still plays an important role, but it's different. I love the idea that we can take an hour in someone's day with a highly curated, really beautiful piece of printed content. We have to really just think about that."

Just briefly:
Deal Down Under: Australian media giants Nine Entertainment and Fairfax will merge in a deal worth $3 billion, The BBC reports. "The deal wraps in Nine's television network, one of the nation's biggest, and Fairfax newspapers including The Sydney Morning Herald, Melbourne's The Age and The Australian Financial Review," The BBC says.

Nintendo: The company launched a media review in the U.S., Ad Age's Megan Graham writes, citing multiple people familiar with the matter. "Publicis Media's Blue 449 is the incumbent on the account and will defend in the pitch," Graham writes.

Imax: It's unveiling its largest brand campaign to date, which is also its first work from TBWAChiatDay. Read about it by Ad Age's Adrianne Pasquarelli.

'Dear Mr. Zuckerberg': The parents of Noah Pozner, a 6-year-old killed in the 2012 Sandy Hook school shooting, wrote an open letter to Facebook's Mark Zuckerberg; they say they are living in hiding to escape conspiracy theorists who claim the massacre was a hoax. "Our families are in danger as a direct result of the hundreds of thousands of people who see and believe the lies and hate speech, which you have decided should be protected," they wrote in The Guardian.

Strike: YouTube removed four videos from the channel of Infowars' Alex Jones, known for sharing conspiracy theories, and logged one strike against him, The Verge reports. Channels get deleted if they get three strikes in three months. The offending videos included hate speech about Muslims and transsexuals, and one "showed a child who was pushed to the ground by an adult man, under the headline 'How to prevent liberalism,'" The Verge says.

Goop: On a lighter note, we highly recommend the New York Times Magazine feature, "The Big Business of Being Gwyneth Paltrow." It includes a scene of Paltrow at Harvard Business School, talking to students about her brand, Goop, and shouting "VAGINA! VAGINA! VAGINA!" (It was during a lesson on how to create "cultural firestorms" that you can monetize.)

Exclusive: Also on a lighter note, Ad Age's Simon Dumenco spoke with Alexa, Amazon's AI-powered digital assistant, about her boss, Jeff Bezos. "Dumenco scored the exclusive inteview by standing in front of an Amazon Echo device and addressing questions to Alexa." (Q: "Alexa, is Jeff Bezos the richest man in the world?" A: "Yes, Jeff Bezos is the most wealthy man that is in the world.")

Creativity pick of the day: Think of the Guinness beer brand, and contemporary dance isn't really something that comes to mind. Nonetheless, AMV BBDO has created an artsy and strangely compelling ad for the Asian market that features dancers dramatizing what it's like when you pour a pint. Alexandra Jardine writes in Ad Age: "Dancers in dark flowing costumes interpret the movement of the liquid as it hits the side of the glass and explodes into life." We said it was artsy – watch it here.

Friendly reminder: The deadline for nominating someone for Ad Age's 40-Under-40 list is today at 5 p.m. EST.