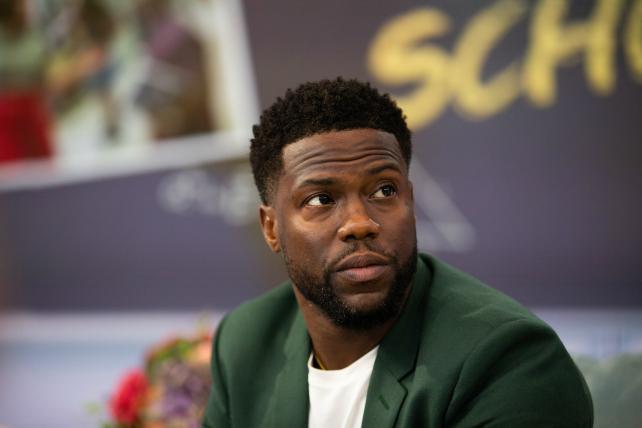 What people are talking about today
Comedian Kevin Hart stepped down as host of the Academy Awards, days after his gig was announced. Hart had faced criticism about some of his years-old homophobic tweets that an editor for The Guardian drew attention to. (One of those tweets: "Yo if my son comes home & try's 2 play with my daughters doll house I'm going 2 break it over his head & say n my voice 'stop that's gay.") At first, via Instagram, Hart declined to apologize, saying, "We feed internet trolls and we reward them. I'm not gonna do it, man." Later, he tweeted that he was backing out of the Feb. 24 event to be broadcast on ABC. "I have made the choice to step down from hosting this year's Oscar's," he tweeted. "This is because I do not want to be a distraction on a night that should be celebrated by so many amazing talented artists. I sincerely apologize to the LGBTQ community for my insensitive words from my past."

So long, sedans
Sedans: They're just not so sexy anymore. SUVs and crossovers have taken over. which is why carmakers are killing off sedan models left and right. E.J. Schultz has a handy guide on a handful that are being discontinued, along with some figures on how their sales have dropped off. Goodbye Chevy Impala and Chevy Cruze. Goodbye Ford Taurus, which was the U.S.' No. 1 car for years in the '90s. As Schultz writes, the car was a product placement in Fox's '90s hit "The X-Files." (Mulder + Scully + a Ford Taurus sedan: That pretty much sums up the '90s.) RIP.

Kontoor
VF Corp. owns jeans brands including Wrangler and Lee, and it's spinning them off into a new company that it will name…Kontoor Brands Inc. Bloomberg News calls the name "a bit of a head-scratcher." The company apparently didn't want to play favorites and call the new company either Wrangler or Lee. It says Kontoor is "a creative variation of the word 'contour.'" Maybe we'll get used to it eventually.

Downvotes
YouTube released its annual "Rewind" year-in-review video with appearances by Will Smith and Jon Oliver (see Ad Age's take on it here from Ann-Christine Diaz). But some fans were annoyed about the absence of famous but controversial YouTubers, including Logan Paul and PewDiePie. The video currently has 783,000 upvotes and 1.5 million downvotes. Read more in The Verge, which says, "The lack of these moments reiterates the divide between how the platform wants to be seen and the actual culture that creators participate in. ... The message from YouTube to marketers was clear: these are the people you want to invest time to watch and whose videos you should run ads on."

Bye: "Keith Weed is retiring as Unilever's chief marketing and communications officer in May after nine years on the job," Jack Neff reports in Ad Age.

Something to watch: Over 200 retailers, banks and tech companies are releasing recommendations for U.S. privacy legislation, The Washington Post writes, adding that it's "a clear push to get out in front of lawmakers promising to rein in their data collection practices in the next Congress."

Catchphrase: The Association of National Advertisers says the marketing word of the year is "brand purpose." As Ad Age Editor Brian Braiker points out on Twitter, that's actually two words.

Ad of the day: The L train between Brooklyn and Manhattan is preparing to shut down for 15 months for repairs. Ad Age's Diaz writes that the ride-hailing app Lyft "is showing its support for the soon-to-be trainless city-dwellers with an outdoor campaign running in Williamsburg and Bushwick that cheekily drops all the l's from its logo and copy, featuring lines like 'Stay ca m. We wi get through this together.'" Lyft, surely you're not gloating about how much money you're going to make during the train shutdown, right? Anyway, check out the ads here.