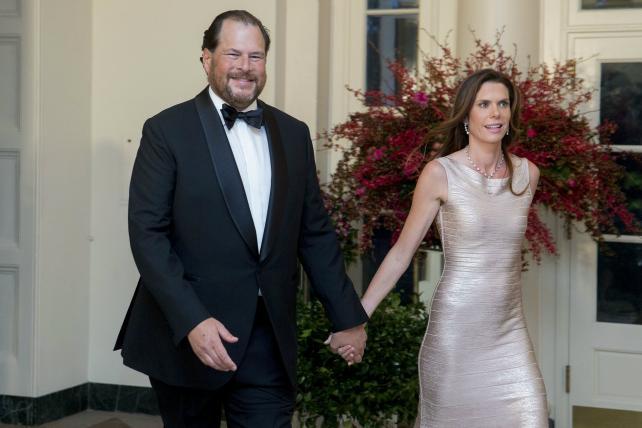 Welcome to Ad Age's Wake-Up Call, our daily roundup of advertising, marketing, media and digital news. You can get an audio version of this briefing on your Alexa device. Search for "Ad Age" under "Skills" in the Alexa app. What people are talking about today: Time magazine is getting new ownership, again. Salesforce co-founder Marc Benioff and his wife, Lynne Benioff, are buying the venerable magazine from owner Meredith Corp. for $190 million, as Bloomberg News reports. Once the deal closes, the magazine will be a personal family holding, but the Benioffs say they won't take a role in journalism-related decisions. In a tweet, the Salesforce chairman and co-CEO called Time "a treasure trove of our history and culture."
Can the Benioffs do for Time what Amazon CEO Bezos did for The Washington Post five years ago? As Vanity Fairrecently wrote, Bezos has been seen as the "shining hero of dead-tree media, the face that all struggling print publications see in their dreams at night."
Meredith Corp., owner of Better Homes and Gardens, acquired Time Inc. earlier this year; it intends to shed some of Time Inc's most iconic titles because they don't fit Meredith's emphasis on lifestyle brands. Besides Time, what about the other former Time Inc. publications that Meredith is still trying to sell? Recode asks: "Are there any other billionaires out there to buy Fortune or Sports Illustrated?"
Editor's note: Edward Felsenthal, Time's editor, says that "from the first moments we sat down with Marc and Lynne to discuss Time's future, we knew that this was not just a meeting of minds and business goals, it was a confluence of purpose." Read the full letter.

A new approach
Uber's marketing is taking a new direction. The company, whicih just debuted a new logo and hired a new chief marketing officer, also has a cheerful new campaign that it says will be the biggest in its history. Ad Age's E.J. Schultz writes:

"One ad shows people taking Ubers to a range of activities, including major life events, like to the hospital to give birth. One scene shows a gay couple taking an Uber to meet one of the partner's parents. Another shot shows an older couple heading to a dance club. It is backed by a message that borders on a motivational speech: 'Whatever your ambition, whatever your drive, whatever you are chasing, opportunity is everywhere…All you have to do to find it is get out here.'"

Schultz says the campaign by 72andSunny Los Angeles has a "more uplifting tone" than its last one, which was an attempt to undo damage to Uber's reputation after successive scandals, including claims of sexual harassment and gender discrimination. That campaign featured CEO Dara Khosrowshahi talking about how Uber has a new culture. Though he never actually said the words "we're sorry," the campaign was seen as a way of apologizing for Uber's past transgressions and moving on.

Tats
In Russia, Domino's offered free pizza for life to anybody who got a tattoo of the pizza chain's logo. You might think there wouldn't be many people willing to brand themselves, literally, and become a walking fast-food billboard.You'd be wrong: There were so many takers that the brand had to end the campaign within days, instead of the two months that were originally promised, as The Wall Street Journal reports. The company says 381 people qualified for the promotion in the four days it ran. "Bargains and freebies are powerful draws" in Russia, the Journal says. It also notes that:

"The Soviet period—where foodstuffs were often cheap but in short supply—and the economic hardships of the 1990s have conditioned many Russians to pounce on a good deal. A stagnant economy has left average disposable incomes stuck around $500 a month."

The article is illustrated with Domino's logo tattoos, one of which was still painful-looking and red. But maybe that's a small price to pay for all those free meals.

No joke
So why did Alex Bogusky return to CP&B, the agency he co-founded, then walked away from in 2010? After all, as Ad Age asked him, "Why not just stay in Hawaii and bike and surf?" Bogusky, responding to questions via email, said he's been watching from the sidelines as challenges surface in the relationships between agencies and clients, and he has ideas on how to tackle them. Also, agency co-founder Chuck Porter apparently had a role in luring him back:

"Chuck and I have always had a coffee about once a month or so, and usually he would ask me to come back at some point, and it was more of a running joke. Recently he asked, and I sort of surprised us both by saying that it might be fun."

It's Bogusky's first time talking to the media since his return; check out the Q&A from E.J. Schultz here.

Just briefly:
Probe: Amazon is "investigating suspected data leaks and bribes of its employees as it fights to root out fake reviews and other seller scams from its website," The Wall Street Journal reports, adding that the issue is pronounced in China.

Help wanted: Facebook posted an ad for a human rights policy director; responsibilities include "coordinate and advise Facebook teams working on human rights, conflict prevention, peace-building, and related projects." The company has come under criticism for providing platforms for hate speech and disinformation that sparked violence in countries including Myanmar and India.

Dmexco: Lena Petersen, chief brand officer of MediaLink, shares her thoughts about the DMEXCO conference in Germany last week. "The content, if not surprising, was still strong, and the start-up energy was actually amplified, with lots of investors scrutinizing possibilities," she writes in Ad Age.

'We messed up big': "A controversial sweatshirt reading, 'Being fat is not beautiful, it's an excuse,' is no longer for sale, following days of backlash and public outcry," Ad Age's Adrianne Pasquarelli writes. The product was sold by retailer Revolve and was part of a collaboration collection by brand LPA and others such as Lena Dunham. "We messed up big," Revolve says.

Sunset Boulevard: "New-media startup Attn has put up a billboard on Sunset Boulevard in Los Angeles to get the word out about the new show it's making with Facebook," Ad Age's Garett Sloane writes.

Creativity pick of the day: It's an ad for Axe body spray. No, wait, it's a music video. "Axe has collaborated with the DJ and influencer Martin Garrix, whose videos regularly get upward of 900 million views, on a new music video as it seeks to target teenage boys via the music world," Ad Age's Alexandra Jardine writes. The video is set in a Laundromat. It's trippy and fun; check it out here.