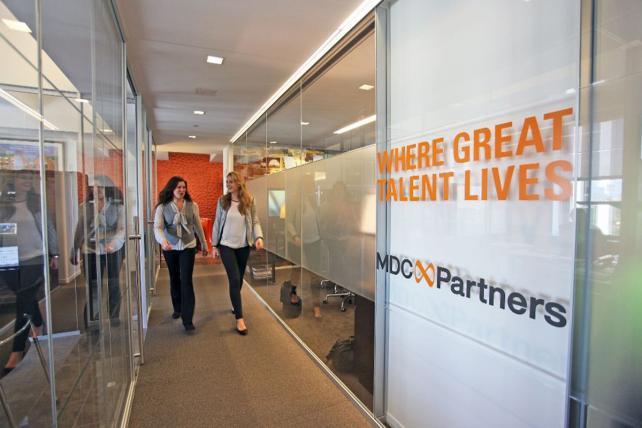 Welcome to Ad Age's Wake-Up Call, our daily roundup of advertising, marketing, media and digital news. You can get an audio version of this briefing on your Alexa device. Search for "Ad Age" under "Skills" in the Alexa app. What people are talking about today: MDC Partners says it's considering its options, including a possible sale. As Ad Age's Megan Graham writes, the company put out a statement about its strategic review process after The Wall Street Journal reported that a boutique investment firm had talked to potential buyers on MDC's behalf. MDC, owner of agencies including 72andSunny, Anomaly and Crispin Porter & Bogusky, confronts similar pressures to what other big advertising groups face, including spending cuts by clients, and its struggles have been in the news for months. In May, MDC's CEO called the company's first-quarter financial results "unacceptable." In July, it made cuts to its leadership team. This month CEO Scott Kauffman announced that he's stepping down. The company now says it's doing a strategic review while also looking for a new CEO. There's a lot up in the air right now.

#StrikeBBH
SAG-AFTRA is calling for a strike against BBH, the creative agency owned by Publicis Groupe, in a new flareup of tension between the actors' union and ad agencies. Ad Age's I-Hsien Sherwood writes that "the union is instructing its members not to work for the agency, which employs on-air talent in its work for clients like Sony, Amazon, Google and Netflix." Earlier this month, BBH ended its nearly 20-year relationship with the union, saying it was hard to compete against other ad agencies that hadn't signed with SAG-AFTRA. (Non-signatories include Droga5, 72andSunny and R/GA, Sherwood writes.) BBH also said its contract with the union was outdated, a leftover from the era before digital advertising exploded. SAG-AFTRA President Gabrielle Carteris shot a video explaining the strike; she says BBH has been "unwilling to engage in meaningful conversations, and we're left with no choice." BBH didn't immediately return Sherwood's request for comment. Read more, and watch Carteris' video, here.

Big deal
Adobe just made a move that shakes up the marketing tech space. Bloomberg News reports that the company cut a deal to buy software maker Marketo for $4.75 billion, "bolstering its marketing tools in a bid to compete against Salesforce.com Inc. and Oracle Corp. in a fast-growing business." Marketo's products include marketing automation, email, social, digital ads and marketing analytics. A few months ago, Adobe bought e-commerce specialist Magento for $1.68 billion. As Reuters says, "Adobe has been on something of a shopping spree lately."

Facebook is for lovers
Facebook just started testing its new dating service, called, yes, Dating, in Colombia, and Wired reports that "you can expect to find exactly zero swiping." It uses the Facebook mobile app, but you create a separate profile from your standard one. Facebook already knows a lot about you, and it will put that data to use to play matchmaker. Wired writes that "Facebook will use a unique algorithm to match you with potential dates, based on factors like things you have in common and mutual friends." Guess Facebook doesn't buy the whole "opposites attract" theory?

Just briefly:
On the auction block: Comcast and 21st Century Fox "will settle their takeover battle for Sky in a weekend auction run by British regulators, setting up a dramatic climax to a 21-month sale process that has pitted some of the world's biggest media giants against each other," The Wall Street Journal reports.

Number of the day: ESPN+, the newish streaming service, has over 1 million paid subscribers after five months, the Walt Disney Co. says.

Gap: Gap Inc., has the Athleta womens' activewear brand, and now it's getting into men's sportswear with a new label called Hill City. Read more by Ad Age's Adrianne Pasquarelli.

Campaign of the day: MINI wants to get couch potatoes off the sofa (and onto the road, of course). Ad Age's Ann-Christine Diaz writes that "the #MINISpoilers campaign from Pereira & O'Dell hit social media this week in films and posts that cheekily reveal the outcomes of popular series." That way you can turn off the TV and hop in the car, because you already know what's going to happen. The TV shows aren't named, but they don't need to be. Here's one synopsis: "There are a bunch of dragons. Everyone dies." Check it out here.