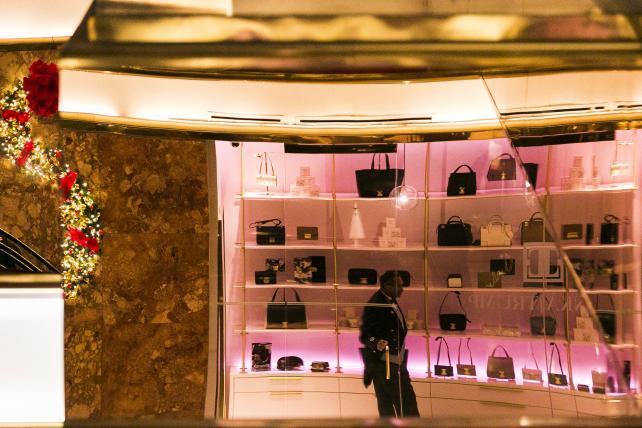 Welcome to Ad Age's Wake-Up Call, our daily roundup of advertising, marketing, media and digital news. You can get an audio version of this briefing on your Alexa device. Search for "Ad Age" under "Skills" in the Alexa app. What people are talking about today: Ivanka Trump, presidential daughter and White House advisor, is closing down her namesake fashion brand. As Ad Age's Adrianne Pasquarelli writes, "The seven-year-old label, which opened a store last year in Trump Tower, will shut down so Trump can focus on her work as an advisor in Washington D.C. to her father." But there may be other factors as well. As Pasquarelli notes, several department stores have dropped the label, citing poor sales. (Trump had already stepped away from running her brand, but she kept a financial interest in it.) As things wind down, the brand's website is nonetheless up and running, with no sign of anything amiss; shoppers can still buy items like the Classic Sculpting Jeans in Vintage Wash ($89) and a Ruffle Sheath Dress ($128.)
Coincidentally: "Ms. Trump's decision comes as the Trump administration threatens to escalate its trade dispute with China, where many of her products are manufactured," as The New York Times notes. But the brand says the tariffs have nothing to do with it.
Reality check: Pause for a moment of deeper reflection on this news. "Ivanka Trump is shutting down her fashion brand to focus on her White House duties. That is a real sentence in 2018," screenwriter and producer Randi Mayem Singer tweeted.
In other Trump news: CNN got hold of the #TrumpTapes – in which Donald Trump and his personal lawyer Michael Cohen appear to discuss payments to a former Playboy model. (The Twittersphere is obsessed.) Listen to the recording on CNN.

Phew
In gloomy times for most ad giants, Interpublic Group just delivered strong quarterly earnings. As Ad Age's Megan Graham writes, the owner of Mediabrands, McCann Worldgroup and FCB reported organic net revenue up 5.6 percent from the year-earlier period, and 4.6 percent in the U.S. The news came after weak results from both Omnicom Group and Publicis Groupe sent their share prices plummeting and raised fresh questions about how huge ad holding companies are adjusting to digital transformation and competition from consultancies. The Interpublic Group earnings call was more upbeat, with a bit of joking from IPG CEO and Chairman Michael Roth. As Graham writes,

"One analyst asked for additional color on the 'real, notable divergence' between IPG's results and those of its competitors. 'You don't accept the fact that we're just better than everyone else,' Roth joked.

Read more about it here.

A pledge
"Facebook can no longer block minorities or other groups from seeing advertisements," as Bloomberg News reports. That's because of an agreement with the Washington State Attorney General's Office, which says Facebook has 90 days to make changes. And they're applicable nationwide, not just in Washington. Facebook signed a binding agreement saying third parties can't use the platform to discriminate based on ethnicity, religion or sexual orientation, the report says. Facebook has already made some moves to prevent discrimatory ads on its platform, but the Washington AG's office says it "required fixes far broader than the temporary changes Facebook announced in November 2017." It's worth noting that the state of Washington began looking into Facebook ads because ProPublica, the non-profit news organization, has been digging into the issue. ProPublica tweeted the news out with a flexed bicep muscle emoji, noting that Washington's move was "inspired by our reporting."
Meanwhile in China: The Chinese government blocks internet users on the mainland from seeing Facebook, but the company just set up a subsidiary there; it plans to "create an 'innovation hub' to support local start-ups and developers," Reuters reports.
And one last Facebook thing: Facebook's quarterly earnings are coming later today. And as Wired reminds us, despite all Facebook's problems, its "stock has never been more valuable."

"The story we got from witnesses was that the guy walked in, stripped down right there in front, left the clothes and belongings at the front desk, walked back and forth across the gym a couple of times and then settled in over at the yoga mats." And also: "The only comment he made was that he thought it was a judgment-free zone, apparently referencing their slogan."

The suspect was taken into custody while doing a "yoga-type pose" and was charged with indecent exposure, lewdness and disorderly conduct, the Union Leader says. As someone tweeted, "Here's to hoping he wiped down the equipment afterward."
ICYMI: Check out Planet Fitness' funny new "judgment-free zone" ads here, with commentary by Ad Age's Alexandra Jardine.

Just briefly:
AT&T: As the company reported its first earnings since buying Time Warner, it tried to "dispel fears that it will turn HBO into a content mill," Jeanine Poggi writes in Ad Age.

What Matt Lauer is up to: The former "Today" show co-host "is seeking to have New Zealand's government pay him hundreds of thousands of dollars if he is forced to let more hikers and hunters use his ranch to get to a picturesque conservation park," The New York Times writes.

Comeback kid: About 6.48 million TV viewers watched Tiger Woods on NBC in the final round of the British Open, according to Nielsen data, "making it the most-watched final round of the tournament since 2000," Ad Age's Anthony Crupi writes.

Where are they now?: Ad Age's first 40 Under 40 list, in 2006, included a few names you might recognize, like David Droga. Read more by Ad Age's E.J. Schultz, and take note: The deadline to nominate someone for this year's list is Thursday at 5 p.m. EST.

Moving: Swedish directing collective Traktor is moving to a new production home, Stink Films, after three years with Rattling Stick. Traktor, which worked on the "It's a Tide Ad" Super Bowl campaign, talked to Ad Age's Ann-Christine Diaz about staying relevant over the years: "We look for heart. It's as simple as that," they say.

The end of masculinity?: Futurist Faith Popcorn has tips for brands about how to address the upending of traditional masculinity. "In this revolution, women will gain strength, men will find new footing, and the gender-fluid will rise. Get ahead of their needs or get out of the way. Now is not the moment to play it safe," she writes in Ad Age.

Beyond Hollywood: When 72andSunny set up in Los Angeles 15 years ago, it was "in pursuit of what we called 'a flip-flop lifestyle,'" Co-Founder and Creative Co-Chair John Boiler says. Since then, the city has become an "increasingly alluring destination for creative professionals in advertising," as Ad Age's Ann-Christine Diaz writes.

Quote of the day: "We need to listen to people (including internally) when they tell us a feature is creepy or point out a negative impact we are having in the world," Alex Stamos, Facebook's outgoing chief security officer, in an internal memo from March that was obtained by BuzzFeed News.

Creativity pick of the day: Ikea is getting literary. A store in North London is doing a partnership with the Man Booker literary prize. And shoppers can read novels shortlisted for the award in a reading room furnished by Ikea products, like those ubiquitous Billy bookcases, as Ad Age's Alexandra Jardine writes. Plus, you can take a book home with you. Read more here.