Monday Wake-Up Call: A shooting is livestreamed on Twitch, and other news to know today | Ad Age
Skip to main content

Monday Wake-Up Call: A shooting is livestreamed on Twitch, and other news to know today 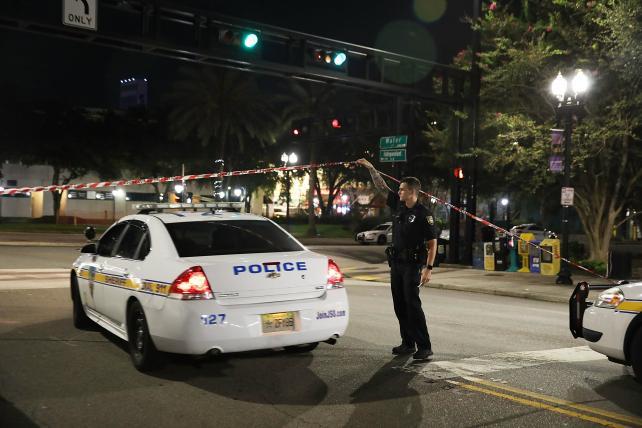 Near the scene of the shooting in Jacksonville, Florida.
Credit: Joe Raedle/Getty Images

Welcome to Ad Age's Wake-Up Call, our daily roundup of advertising, marketing, media and digital news. You can get an audio version of this briefing on your Alexa device. Search for "Ad Age" under "Skills" in the Alexa app. What people are talking about today: A gunman opened fire Sunday during an esports tournament being live-streamed from Jacksonville, Florida, killing two people and then fatally shooting himself, the Jacksonville sheriff said. Eleven people were treated for injuries at hospitals. CNN reports that an online stream of the event posted on Twitch captured some of the terror and chaos. "The game abruptly stopped after several shots were heard," it says. "People screamed. One person cried out, "Oh f**, what'd he shoot me with?" (The video feed of the players appeared to cut out once the shooting started, but the audio recording continued.)
What Twitch says: Twitch, the live-streaming platform for gamers owned by Amazon, posted on Twitter that it was "shocked and saddened," and it sent condolences to the victims and their families. Electronic Arts, which created the "Madden NFL 19" football video game that was the focus of the tournament, also expressed its sympathies and said it was supporting investigators. The motive is not yet clear.
Some context: The Washington Post explains the competitive video-game phenomenon: "Esports tournaments such as the Sunday event involve professional competitors vying for prize money in games that are often streamed to thousands of online spectators."

'Thank you for your anger…'
Papa John's, whose founder was caught using the "n"-word and stepped down as chairman of the board, says it's trying to win back customers' trust. Part of that includes unconscious bias training for staff, Ad Age's Jessica Wohl reports. Papa John's also made an apology video, a tactic that's very of-the-moment (see Facebook, Uber and Wells Fargo apology ads). Wohl writes:

"[Papa John's] posted a video on Twitter showing some social media posts patrons have fired off since the fallout, such as, 'I'd rather have frozen pizza than racist pizza' and 'I don't know what if anything you will be able to do to earn my business again.' Papa John's then thanks people for their anger, criticism and honesty in imagery typed on the screen."

Some Twitter reactions were snarky, and someone guessed at Papa John's underlying meaning: "'We hope you can find it in your hearts to try our new Summertime BBQ Pizza. We are deeply sorry.'"

Nike's superhero
The president of the French Tennis Federation said Serena Williams' sleek black Nike bodysuit will no longer be accepted at the French Open. Bernard Giudicelli told France's Tennis Magazine that Williams' "catsuit" outfit and anything similarly flashy would not be allowed, because "you have to respect the game and the place." Williams has said the costume was inspired by "Black Panther" and also helped her prevent blood clots, an issue after giving birth to her daughter.
Giudicelli's comments caused a stir, but Williams defused the situation. According to The New York Times, Williams told a news conference she had a great relationship with Giudicelli and added: "When it comes to fashion, you don't want to be a repeat offender."
What Nike says: The brand tweeted an excellent retort to the catsuit ban. "You can take the superhero out of her costume, but you can never take away her superpowers. #justdoit".

Jemele Hill: The ESPN host will reportedly leave the network on Sept. 1. Journalist James Miller posted the news on Twitter, saying Hill's departure was "amicable" and includes a buyout. Variety also reported on Hill's plans. Hill drew scrutiny last year for several tweets, including one that referred to President Trump as a "white supremacist."

Boxing: The overhyped boxing match between YouTubers Logan Paul and KSI ended in a draw. YouTube charged people $10 each to watch, but "pirated broadcasts of the boxing match seemed to be everywhere on social media," The Verge writes.

An ad to watch for: NBC and Google are teaming up to try to convince people not to skip ads on YouTube. "Starting Sept. 19, YouTube users who watch certain ads without skipping ahead after six seconds will be rewarded with a clip from Season 3 of 'The Good Place,'" NBC's comedy about the afterlife starring Ted Danson and Kristen Bell, Ad Age's Jeanine Poggi writes. The first part of the campaign employs cute animals (think fluffy bunnies) to try to get people to not to hit "skip." Read more from Poggi here.

Ad Age Next has added another speaker to the lineup: Alexis Ohanian, a co-founder of Reddit and Initialized Capital. Next is our largest annual event, and it's happening Nov. 13 and 14 in New York City; read about it here.