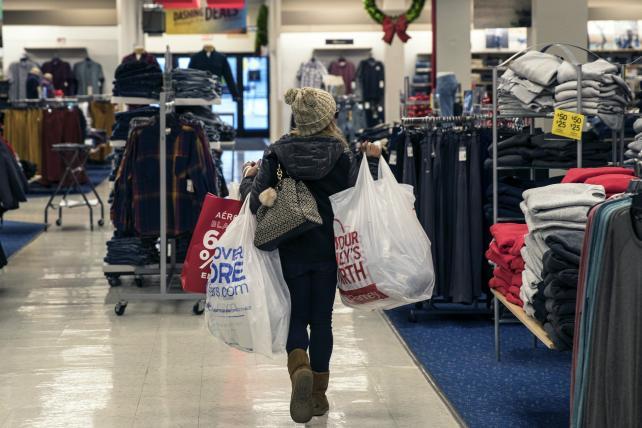 What people are talking about today
Happy Cyber Monday. But seriously though, do we even need Cyber Monday, since there were so many online shopping discounts already over the holiday weekend? E-commerce was way up on Black Friday, soaring 23.6 percent from a year ago, according to Adobe Analytics data cited by CNBC. Black Friday used to be all about in-store deals (and long lines), but CNBC reports that foot traffic in brick-and-mortar shops was down 1.7 percent from 2017 as the action shifts online, according to preliminary data from ShopperTrak. As Bloomberg News writes, many legacy retailers aren't equipped to handle the transition:

"E-commerce isn't yet the industry's forte -- despite heavy investment and plenty of lip service about how far they've come. That was apparent again this holiday weekend as retailers including Lowe's Cos., Walmart Inc., Lululemon Athletica Inc. and Kohl's Corp. dealt with glitches and malfunctioning websites -- and customer ire."

Meanwhile, across the pond
The city of London is banning ads for junk food across the city's public transport system in an attempt to tackle childhood obesity. "It is absolutely imperative that we take tough action against this ticking timebomb now, and reducing exposure to junk food advertising has a role to play in this — not just for children, but parents, families and carers who buy food and prepare meals," Mayor Sadiq Khan said in a statement Friday. What qualifies as junk food? The Guardian says that starting in February, "advertising will be banned for most sugary drinks, hamburgers, chocolate bars and salted nuts."

'We are sorry if we made mistakes'
Dolce & Gabbana offended Chinese consumers with a series of ads that were described as insulting, racist and sexist. (One spot showed a Chinese woman awkwardly trying to use chopsticks to eat a huge, tubular Italian cannolo pastry.) Messages from co-founder Stefano Gabbana's Instagram account made things worse; someone using the account wrote insults about China and used a poop emoji to describe the country. (The brand blamed a hacker.) D&G canceled a Shanghai fashion show, and some online retailers in China reportedly dropped the brand. Eventually the two founders apologized in a minute-and-a-half video: "We love your culture and certainly have much to learn. That is why we are sorry if we made mistakes in the way we expressed ourselves."
But Friday's apology video came days after the damage had been done. Plus, the founders seemed to be stiffly reading prepared remarks. One YouTube commenter described it as looking like a video you'd make "when your mom makes you apologize to your sibling or else she will take away your lunch money." Read about the brand's crisis from The New York Times, which says that "racism and ignorance about China has imperiled the brand."
Reminder: Chinese consumers accounted for a third of the global luxury market last year, a figure that will rise to 46 percent by 2025, according to a study by Bain. Read more by The Associated Press.

Next generation: "Fourteen months after the Association of National Advertisers issued a scathing report highlighting academia's lackluster role in preparing students for jobs in the industry, its ANA Educational Foundation says it's making inroads into fixing the problem," Jessica Wohl writes in Ad Age.

Whoops: "AT&T Inc. and other big television distributors said Saturday they would refund customers who paid to watch a showdown between Tiger Woods and Phil Mickelson after AT&T shanked its webcast of the much-anticipated match," The Wall Street Journal writes.

ICYMI: On the eve of Thanksgiving, Facebook acknowledged that key points of a New York Times investigation about its practices were true. (In essence, outgoing communications and policy head Elliot Schrage acknowledged hiring a controversial PR firm called Definers Public Affairs to research critics including George Soros.) Read more on that from Bloomberg News. And note that revealing unflattering information on the eve of a holiday is "the oldest PR trick in the book," as Quartz writes.

What happens in Vegas: Vegas is now home to the world's biggest weed store, with 40 cash registers, Bloomberg News reports. Also, the floor lights up when you step on it.

Ad of the day: Would you eat a cheeseburger pizza with pickles on it? And how on earth do you advertise such a thing? In a social campaign for the Domino's offering in the UK, the tagline calls it "the official food of WTF!" Which "gets straight to the point of what everyone is probably thinking," as Ad Age's Alexandra Jardine writes. Check it out here.